Recording events in someone’s life as they happen, year after year, is always going to be a plod unless, of course, the subject is so scintillating that each moment can be savored simply for what it is. If this is not the case, we’re going to be fidgeting in our seats, wishing theatres had clocks so we’d know how much longer it will be before the credits roll. In Barney’s Version it’s two hours and twelve minutes, and that’s a very long time.

Barney Paranofsky is a hard-drinking, cigar smoking television producer. His first wife is a little crazy, his second a spoiled princess and his third, with whom he has two children, a paragon of virtue. Despite an opportunity to find true happiness, Barney falls by the wayside and is forced to face the consequences of what he has wrought.

The opening scene of this film shows a truly flawed character, which immediately draws the audience in, but after a while it becomes clear Barney is flawed but does not have one redeeming feature to his name. He’s not charming, he’s not funny, he’s incredibly selfish and although he claims to be outspoken and politically incorrect, he is in fact just plain rude and whenever he doesn’t get his way, he throws his toys out of his pram. How adorable is that? 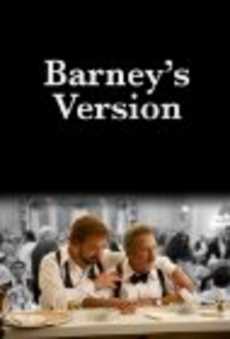 As Barney meanders through his self-indulgent life, two additional story threads intrude and, although they take up a lot of screen time, go nowhere. One is about Barney’s father and the other his best friend. Neither have any true impact on anything and the latter also takes this character driven story into murder mystery land which stops the telling of Barry’s tale and feels like being stuck at a traffic light in a very, very long traffic jam.

And finally, I have a question for the filmmakers – why did you show the end right at the beginning? I did hold out hope that this was a trick and that the writer had something else up his sleeve, but nope, that was it. Not only does knowing the final outcome take away the intrigue of wondering what will finally happen to Barney, but it also gives the audience the option of giving it an “oh well” and catching an earlier bus home. Unfortunately, not everyone relies on a wall clock these days.