Randy Daytona (Dan Fogler) was a promising ping-pong prodigy when, at the age of 12, he was thoroughly humiliated at the 1988 Summer Olympics in Seoul, South Korea by his showboating German adversary, Karl Wolfschtagg (Thomas Lennon). Now it’s been almost two decades since Randy picked up his paddle to play competitively. Ostensibly washed-up, his career has been reduced to performing tricks as a lounge act at a seedy dinner theater in Reno.

So, it’s no surprise that he seriously considers coming out of retirement when the FBI attempts to enlist his assistance in finding a fugitive on its Ten Most Wanted List. For, not only is the diabolical Feng (Christopher Walken) the mastermind of an international criminal enterprise, but he conveniently also happens to be the cold-blooded killer responsible for the murder of Randy’s father (Robert Patrick) many years ago. 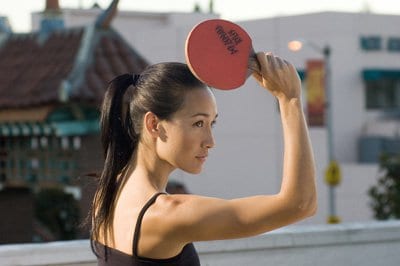 Agent Ernie Rodriguez (George Lopez) reveals to his recruit that the very elusive Feng, who has never been photographed, is about to stage an invitation-only ping-ping tournament featuring the best players around. The plan is for Randy to work himself back into good enough shape to be among those summoned to the site of the top-secret tournament. This will enable him to infiltrate Feng’s criminal operation while simultaneously avenging his dad’s death and reasserting his prowess among his peers.

But for Randy to achieve all of the above, of course he first has to embark on a Karate Kid-quality training regimen. Therefore, the FBI hires blind Master Wong (James Hong) who, with the help of his irresistible niece, Maggie (Maggie Wong), proceeds to whip Randy back into world-class form. 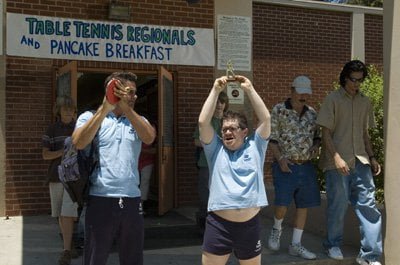 With a plotline suspiciously similar to that of the Bruce Lee martial arts classic Enter the Dragon (1973), Balls of Fury is a zany spoof which substitutes ping-pong for karate while seizing on every opportunity to inject CGI-enhanced slapstick and sight gags every step of the way. Although a few of the jokes simply fall flat, this laff-a-minute adventure is so earnest in its endeavor to keep the humor coming, that you’re likely to find yourself guffawing heartily right on the heels of another bit that just made you groan.

The movie was written and directed by Reno: 911’s Ben Garant, which helps explains why this production is marked by much of the same sort of insanity found on the TV show. The film’s success is attributable primarily to the inspired performances of a talented cast capable of somehow elevating a script that tends to trade in what ordinarily would be considered offensive stereotypes.

For instance, Christopher Walken’s vintage performance as Feng is so over the top, it makes you forget the patently political-incorrectness of a white person playing an Asian. The same can be said of scenes where chopsticks are used to grab a guy by his gonads, or where a character speaking Chinglish mixes his ‘l’s and his ‘r’s. 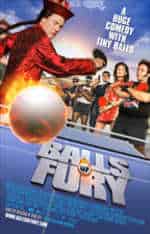 The film’s ensemble also includes Aisha Tyler as Feng’s blowdart wielding henchwoman, along with Reno: 911’s Kerri Kenney, veteran character actor David Koechner and Terry Crews, a buff crowd-pleaser who seems to be asked to flex his pecs in his every cameo nowadays. But Balls of Fury is basically a star vehicle which provides a breakout role for 2005 Tony Award-winner Dan Fogler, a gifted comic who comes across like a combination of Johns Belushi and Candy, exhibiting the former’s impish, unbounded enthusiasm, and the latter’s ever-endearing charm and twinkle in the eye.

Just remember to check your brain at the box-office.