NewsBlaze News
Home Entertainment Movie Reviews As Above, So Below Film Review

This film starts off on a bus in Iran and ends up in the catacombs that lie below Paris. If you’re wondering how these two places fit together, the answer is, they don’t. Not at all. What also doesn’t fit are encounters with a Grim Reaper, mounds of doggie bones, a piano, an analog telephone, a choral group, a lot of blood spatter and a burning Renault hatchback. This is all fodder for a B-rated horror movie but, unfortunately, not one you’d want to watch.

For the last 700 years, the Philosopher’s Stone has been an unattainable mystery and many have spent their lives searching for the elusive artefact that promises eternal life. Now Scarlett Marlowe (Perdita Weeks), a budding archaeologist, has decided to join their ranks. She enters Iran illegally and acquires a map that she believes will lead her to the coveted treasure. She enlists the help of a fellow archaeologist, George (Ben Feldman), to find the team of people who know the catacombs of Paris well enough to guide them to the stone. A deal is agreed and the six set off on their journey.

We are introduced to our heroine by her recitation of a long list of her academic achievements, which is just about all we ever get to know about her. All the other characters remain equally anonymous and we learn nothing about any of them as they make their journey. When a new disaster befalls them, they squabble, someone gets injured or killed, and they then move on to their next contrived tragedy. Scarlett, like all cardboard cut-out heroines, is always the first to take crazy chances and, of course, is ready to make the ultimate sacrifice when the moment comes. She’s not real enough to be irritating and instead indifference reigns as we watch her take one super-daring chance after another. 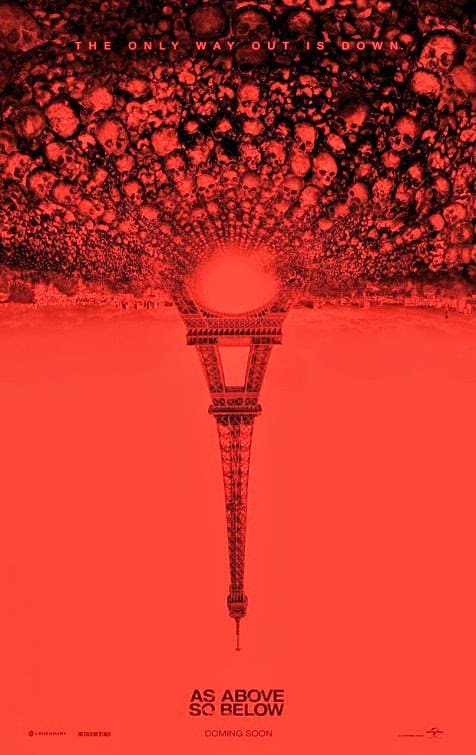 As the story progresses, a pervading feeling of chaos prevails, which gives the impression that the director has been given so much power he’s gone out-of-control. However, it soon becomes clear that this is not the case and the director has, in fact, lost control, leaving him with nothing more than 93 minutes of gory nonsense.