Sometimes it’s hard to articulate what makes a movie great. Not so with The Artist, a French film shot in Los Angeles. A black and white “silent” film. Released in 2011. Please stop scratching your head. If you haven’t heard about this film yet, no, I’m not joking!

I left the Hollywood Arclight Cinema firmly convinced that The Artist is not only the best film of 2011, but one of the best films of all time. It was the top winner at the Golden Globes, picking up awards for Best Motion Picture – Comedy Or Musical, Best Original Score – Motion Picture, and Best Performance By An Actor In A Motion Picture – Comedy Or Musical, with the most nominations for Academy Awards along with Martin Scorsese’s Hugo). Although there is virtually no recorded dialogue, the soundtrack follows the cinematic standard of so-called silent films, which were often, originally, accompanied by a full scale live orchestra. The score for The Artist, a sweeping, grandiose opus that easily twists and turns from buoyant to melancholic and everywhere between, composed by Ludovic Bource, fulfills the audience’s need for emotion, as does Jean Dujardin’s expressive portrayal of George Valentin, one of the last silent screen stars of the late 1920s. 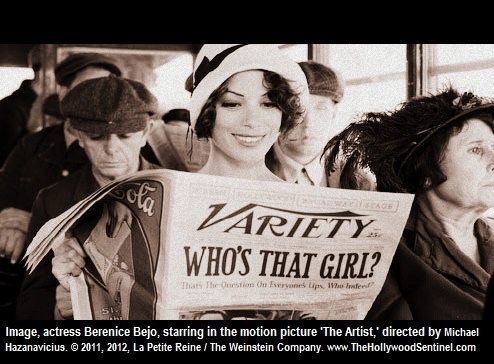 George Valentin is on top of the world when a chance encounter with a beautiful ingenue, a plucky Peppy Miller played by Berenice Bejo, throws him literally off-balance. As Peppy climbs up the Hollywood ladder from featured extra, to getting a few small lines here and there, to co-starring and then starring as a leading lady, George’s star begins to fade. The studio bosses, led by Al Zimmer (fantastically well-played by John Goodman) realize that talkies are the way of the future, and movie stars from the silent era don’t resonate with audiences. Audiences want young, fresh, new faces. Thus begins George’s fall from grace, as he finances his own silent picture that flops, compounded by considerable losses in the stock market crash of 1929. Meanwhile, Peppy is living the high life, with a cadre of boy toys catering to her every whim. But George Valentin still makes her heart go pitter-patter. And like a guardian angel, Peppy silently looks out for George, finding a script that they can star in together. But George’s pride has taken such a beating that he can’t stand her “charity” and considers ending it all.

What makes this movie so brilliant and so effective, is that it encapsulates and concentrates all the optimism and joi de vivre that is cinema’s finest virtue. Despite subtitles, Guillaume Schiffman’s hyper-kinetic camera work synthesizes with selective use of sound and the actors’ facial expressions and body language in a way that the audience realizes the irrelevance of words. It’s not, after all, what you say, but how you say it.

I applaud screenwriter and director Michel Hazanavicius for a film that is cohesive, clear, and intensely pleasurable to watch. If you haven’t seen it yet, go see The Artist. When we left the theatre, everyone was smiling ear to ear.