On one of the Sunday morning political shows last year, New York City mayor Michael Bloomberg posited that a fake passport could be procured on the streets of Gotham City for the paltry sum of $50.

Colin Firth, to make good on the tag line in his soon to be released movie “Arthur Newman” “If you don’t have someone’s life, get someone else’s,” was expensed much higher, at $3,000.00.

Firth plays a washed up former professional golfer by the name of Wallace Avery. Life is not treating Mr. Avery well in South Florida, all because of a jilted putt on the golf course years ago. At this moment, Firth isn’t spending much time with his son, and consequently his home life is a disaster. Our tale begins at the Florida unemployment office.

Firth’s plan is to depart South Florida and use a fake identity to live out a new life amongst the country club community of Terre Haute, Indiana. He acquires a new Mercedes Convertible, tows it to a campsite and stages a mock disappearance, leaves his SUV behind and treks north. 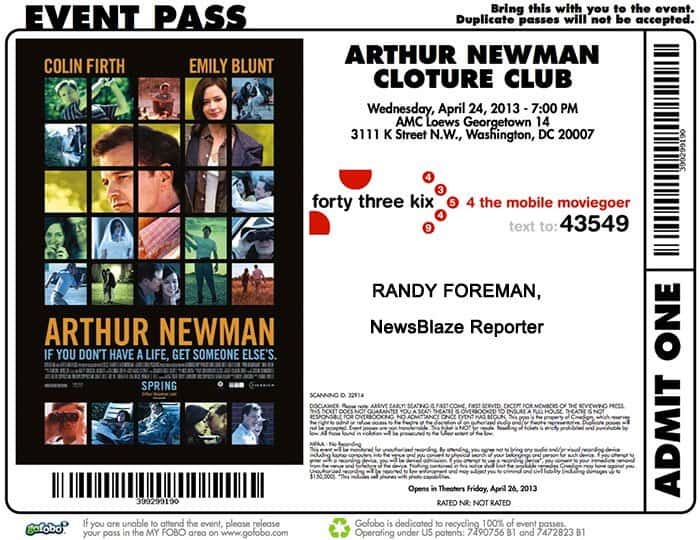 The movie at this point becomes a tale almost entirely of substandard hotels along the Interstate. At the first such hotel he stays in, he witnesses his supporting actress, Emily Blunt get arrested. She gets high and engages in other nefarious activities, much like how Denzel Washington would get involved with a co star in “Flight” while getting through his recovery. Firth adopts a similar posture.

Blunt is attracted to the unassuming bad boy corrupt antics of Firth because she too has a false front. It takes one to know one, to develop the chemistry.

The presence of a relationship has its genesis when Firth and Blunt are at the Bus station, and Firth attempts to unload his costar and send her back to Durham, NC. They observe a passenger on the bus in need of CPR and Firth tries to save what the authorities identify as a “John Doe” or someone without an identity – much like the two of them.

Getting Inside Other People

Blunt gradually begins to trust Firth as the picture progresses. She respects his property, while constantly acting wild and getting high off of burglarizing other people’s houses. Firth then succumbs to the temptation of Blunt and they begin a carnal relationship.

Lies can not sustain them, as Blunt and Firth discover they are found out in Terre Haute much like Professor Harold Hill was found out in the music man. Firth and Blunt are forced to confess sins in their lives that get them almost entangled with law enforcement.

Meanwhile, back home in Florida, they are closing in on why the disappearance was happening.

The Age Of The Fakes

It was hard to notice much acrimony or excitement at the screening of this movie in Georgetown, Washington’s tony neighborhood. I get the feeling it will not rake in the revenues that a Disney picture may receive, but I think it is a picture for the age of the fake – an era where you find the so-called experts are hollow.

That is maybe what movie goers ultimately end up trekking to the movie theater for.