No film has ever tried harder to be funny but every attempt at a punch-line makes a soft landing without so much as a dead bear bounce to send it into the realms of dark comedy, where its concept decrees it was meant to be.

Nick (Jason Bateman), Kurt (Jason Sudeikis) and Dale (Charlie Day) are all treated badly by the people they work for, respectively Dave Harken (Kevin Spacey), Bobby Pellit (Colin Farrell) and Dr Julia Harris (Jennifer Aniston). One maudlin night the three disgruntled employees decide the only way they can reclaim their lives is if their bosses die, so they visit a down-market bar where they become acquainted with Dean ‘MF’ Jones (Jamie Foxx), who takes on the role of ‘Murder Advisor’ and sets their plans in motion. 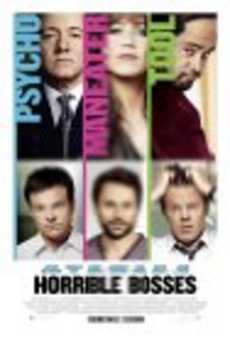 Nick and Kurt both hold responsible jobs that require intelligence but, for the purpose of the plot, they become bumbling idiots. Dale, who’s dumb all the time, adds absolutely nothing to the mix and a far more worthy no. 3 would have been Jamie Foxx, who is frustratingly underused as a stereotypical ex-con. As regards the bosses, Bobby Pellit is a coke-head, and nothing else, Dr Julia Harris is a nymphomaniac, and nothing else and Dave Harken is psycho and nothing else. Spacey is, of course, dynamic in his role but he’s already played this same character in ‘Swimming With Sharks’ which is a far, far superior film.

Even though this is a comedy, the idea that three sane people would decide to kill their bosses is still a stretch and starting with something more believable would have given room for events to steamroll out of control and then perhaps escalate to murder. There is, however, a great plot point when a confrontation takes place between Dave Harken and Bobby Pellit, which sends the storyline careering on its way but it also underlines how superfluous the Dr Julia Harris storyline is. Having said that, the only original entertainment in the entire film is Jennifer Aniston, who didn’t need to darken her hair to show us that she can play bad as good as anybody.

There are no less than six ‘A’ list stars in this film which, even by Hollywood standards, is a lot, and although these names will undoubtedly attract an audience the end result proves, beyond doubt, that however much talent you throw at it, you can never save a lousy script.