This film has a lot to say about British society in the 60s. It comments on classism, sexism and liberalism, and sends a clear message that we should never rely on anyone but ourselves. For the sake of neatness, we’ll call that last one independence-ism.

Jenny Mellor (Carey Mulligan) is 16 years old and a gifted student who attends a fee-paying school in a London suburb. Her controlling father (Alfred Molina) pushes her to study hard for the entrance exams to Oxford and she is happy to oblige until David Goldman (Peter Sarsgaard) comes into her life. He’s twice her age, drives fast cars and seduces both Jenny and her parents with his money and his charm. Jenny’s life does a detour and she exchanges one kind of education for another. 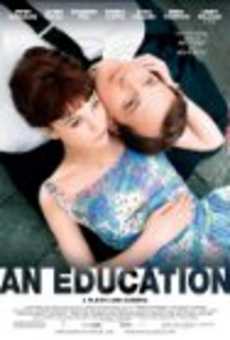 All the characters are well drawn and there’s a great sense of time and place. We go willingly with Jenny on her journey from the classroom, to art auctions, to Paris and to the hotel where she is callously deflowered. The good times are interesting enough, but we spend too much time there before getting to the juice, the moment when the characters pay the price for being fooled by a fool.

Although a lot in this story rings true, it’s hard to believe that any responsible parent would allow their 16 year old daughter to spend time with a man twice her age. It jars and it’s also a missed opportunity for ongoing conflict, which this film badly needs. Seeing Jenny lie and scheme to meet her secret boyfriend would hardly be a stretch; as we all know, parental disapproval is the romantic adhesive equal only to superglue.

This young girl gets an amazing chance to have a brilliant career by going to an expensive school but at one time, many British children born with no privileges were given the same glorious opportunity. Students took an exam at the age of 10 and the cleverest went to a grammar school, so the offspring of manual workers and judges ended up in the same classroom, with the same teacher, and it was all free. Unfortunately, a left wing government got rid of this system, claiming that it wasn’t fair. Thirty years later, I’m still trying to work out how the idiots came to that conclusion.

ABOUT US
NewsBlaze is the alternative business and world news newspaper, with entertainment, music, politics, and the latest breaking news and videos. Visit the NewsBlaze Pressroom to see NewsBlaze in the News
Contact us: [email protected]aze.com
FOLLOW US
© Copyright (c) 2004-2019 - NewsBlaze Pty. Ltd.