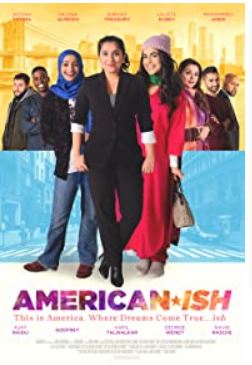 Americanish is about three Muslim women negotiating the dating scene. This is a rich vein to tap but, unfortunately, the film is so packed with clichés, and so bereft of conflict, predictability lurks at every corner. The acting is superb but that’s never enough.

Two sisters, Sameen (Aizzah Fatima) and Maryam (Salena Qureshi) live with their mother, Khala (Lillete Dubey) in Queens, New York. Maryam is still in high school and has a crush on one of the other students. Sameen works for a marketing company and is planning to get her own place to live. Their cousin, Ameera (Shenaz Treasury), arrives from Pakistan in pursuit of a rich husband and Khala assists her niece with her quest. She makes it clear to her two daughters that it’s time for them to start similar endeavors of their own.

The first stumbling block this film encounters is that, whenever one of the girls meet their ‘Mr. Right’, a neon light flashes This Is the One! It really is that obvious. It doesn’t help that all the ‘Mr. Rights’ are woefully undeveloped and they all simply go along with whatever is convenient for the plot. This is particularly irritating when a hot American business owner agrees to marry a woman he’s never even been on a date with. All things are possible, of course, but if the audience doesn’t get an explanation for something unlikely, it just seems silly.

While Maryam and Ameera’s storylines stick to romance, Sameen’s goes off at a tangent. New themes about race, careers and ethics emerge that have nothing to do with her own love interest or, in fact, anything else in the film. This disconnect is a signature of the writing and the reason there are three separate endings. Sitting the characters around the same table for the final scene is clunky and doesn’t solve anything.

This movie is being promoted as the ‘First Muslim RomCom Directed by an American Muslim Woman.’ With so many prolific American Muslim female directors around, this is a sweeping claim. But what can’t be disputed is that RomComs, by definition, have to be about a romance between two main characters. As Americanish is definitely not that, perhaps the filmmakers should redefine its genre as ‘RomCom-ish.’