A hyper-digitalized, dizzying makeover of an enduring classic succumbing to an identity crisis of its own, Tim Burton’s Alice In Wonderland veers uneasily between razzle dazzle weirdness and standard kid entertainment. And with a narrative more internalized in the collective audience consciousness than even the most sequelized of blockbusters, this Alice instead opts for showmanship over storytelling, and whose dense enchanting visuals progressively wear thin.

There’s something about becoming parents that transforms directors and actors alike, no matter how dark their cinematic rap sheets, into giddy performers more intent on clowning around as entertainment for their own offspring, than focusing on viewer expectations, and this film seems to be no exception. And though the surreal surroundings and quirky characters are visually intoxicating, that journey to the cartoonish lower depths with not much of an itinerary in mind that we haven’t seen before, fails to satisfy with its tedious notion of repetitious theatrics and extravagant goofing around. 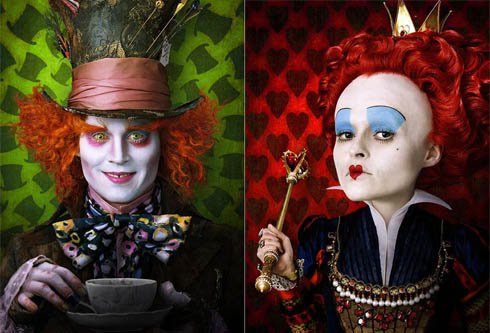 A kind of sequel to an original that doesn’t actually exist, at least not as a Tim Burton production, the film possibly imagines Lewis Carroll’s own followup to Alice’s Adventures in Wonderland and also Through the Looking Glass had he been so inclined, though elements from both figure a great deal in this return to that trippy subterranean realm. An older though not wiser Alice (Mia Wasikowska) is reimagined as a nineteen year old, but the childlike interactions with her hallucinatory environment oddly remain, in a kind of stunned arrested development.

And not much is particularly made of Alice as perplexed cipher to this alternately euphoric and nightmarish world. The center stage clearly belongs instead to the supporting cast of delirious lunatics and babbling creatures, especially main maniacal attractions Depp’s Mad Hatter and Bonham Carter’s swollen headed bratty queen, who repeatedly upstage the wandering bewildered womanchild along the way.

With its busy and bustling world teeming with extravagant sights but somehow as hollow at its core as say, a rabbit hole, Alice In Wonderland is a little like a splendid feast for the eyes at dinner time, not intended for devouring. Or rather, a tantalizing travelogue a little heavy on tunnel vision.