Could it be Bunning’s Bungle? Not likely, even though the 10 billion tax dollar saving is unpopular with some.

What are you going to do with a brilliant baseball player who won’t play nice with a corrupt Congress? The obvious answer, according to some, is “Get him out of here.”

This is the case with Senator Jim Bunning of Kentucky. He moved from being a spectacular player with the Philadelphia Phillies into serving his community, then on to serving the rest of us.

Unwilling to pander to media which as become little more than a Federal parrot, ever happy to repeat any current Washington minutia without including real facts, Bunning never had much support as a D.C. insider. 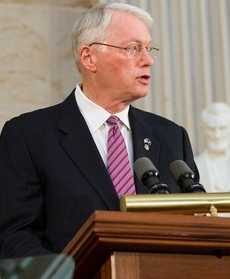 This week, it really hit the fan, what Bunning is reported to have told them to eat. Further angered, he gave one reporter the finger salute similar to, but unlikely to mean, “You’re #1.”

And why not. It isn’t like Bunning has polls to worry about any longer. Not after being strongly told not to run for another term because the Big Spenders would band together to oust him at nearly all costs.

This brouhaha exploded when Bunning cast a vote this week to block a ten-billion dollar money toss that amounted to “Casting pearls before the swine.” The famous biblical quote refers to people who may trample them. In America, there are a rapidly growing number of citizens turning unemployment pay checks into a career with less and less interest in legitimate job search. 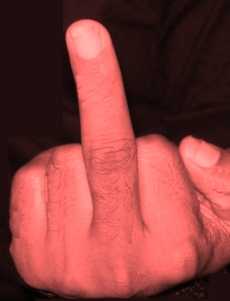 Bunning was not against his fellow countrymen and women however. He objected to Bernake’s Fed tenure practice of printing paper, used as pretend cash, that we don’t have. James Bunning demanded Washington find a way to pay for this 3 parter extravaganza. It included extending unemployment one month, a dole out to “Cobra,” the very expensive over-priced medical issuance company, and a huge grab by Unions ever willing to steal a thrill by driving up costs by personally padding construction expenses.

No telling how many Americans are aware the dollar is down to only 71 cents in value on the world market and still sliding. Obviously Jim Bunning recognizes the danger that we as a country face if it keeps falling.

Jim Bunning is more popular then ever with his home base. Once a shoo-in slam dunk, get elected spot for liberal Democrats, Kentucky has in recent years become more conservative. Today the Republican party, once almost Persona non grata is building party strength, fostered by both what has become known as Blue Dog democrats and tax money conscious republicans.

He may get rude.

He may be crazy.

Some will say both. But for those not marching in lock step to Nancy Palosi’s Washington DC, Jim Bunning is fun to watch.