Slipping out of his comfort zones for a bit as both Madea and director of his own movies, Tyler Perry tries on a new persona for size in Alex Cross as, well, Morgan Freeman. Sort of.

In kind of an all-in-one followup, reboot and prequel to the previous big screen incarnations of the James Patterson popular Alex Cross crime novel series, Perry takes on combo detective/police shrink duty. And that Freeman previously conjured in Gary Fleder’s Kiss The Girls (1997) and the Lee Tamahori 2001 potboiler, Along Came A Spider. 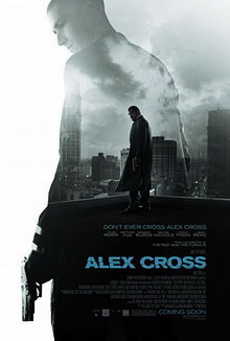 Not quite yet Morgan Freeman’s FBI sleuth, but seriously mulling that vocational switch as Perry’s Detroit investigator Cross segues into middle age slowdown. While having to measure up physically on the beat to his younger, hotshot partner Tommy Kane (Edward Burns), in chasing down those ripped and rowdy perps on the loose.

Although priding himself on his nearly psychic gift of discerning what’s going down inside those criminal minds before their thoughts evolve into premeditated actions, Cross finds himself meeting his match in wits and way beyond in terms of where-with-al. When he encounters a local lunatic dubbed Picasso (Matthew Fox), so named for the depraved drawings he leaves behind at his horrific crime scenes. A super-scary military vet who apparently honed his psychopathic skills in combat previously, Picasso hires himself out when not doing battle with multinational tycoon bad guys, while indulging gleefully in rape and torture as his guilty pleasure amusements on the side.

But after being pursued by Cross and Kane, Picasso orchestrates elaborate payback in retaliation, involving significant others connected to the pair. Which sets in motion a series of attacks and counterattacks around town, and at times rapid fire role reversals as to exactly who may be chasing whom.

The nuttiness is always nicely counterbalanced with a subdued yet cool, calm and collected determined demeanor on the part of Perry, no matter what the imminent danger. And impressively demonstrating a surprising broad range of acting talents, even though Perry might have used more than a little help with her adept scoundrel busting skills, from that Madea.

To see the trailer of Alex Cross: