Directed by Russ Parr, 35 & Ticking revolves around a quartet of lifelong friends, Victoria (Tamala Jones), Zenobia (Nicole Ari Parker), Cleavon (Kevin Hart) and Phil (Keith Robinson). The picture’s point of departure is 1983, when the four were still in grade school. Back then, the boys were fond of teasing Zenobia, a gangly girl quite tall for her age.

The story soon fast-forwards to the present, where we find Zenobia dreading her 37th birthday celebration because she hears her biological clock ticking and she’s still looking for her life mate. Despite her high-profile job as a TV sportscaster, she hasn’t exactly been dating appropriate men. The latest in her long line of losers is Zane (Clifton Powell), an ex-con who objects to her wearing a red dress to a party because it’s a rival gang’s color.

Nerdy Cleavon is single, too, primarily because he lacks the confidence to approach women. Plus, he doesn’t have a job, unless selling his semen to an infertility clinic counts.

He tries to make a love connection with the help of Zenobia who coaches him on how to approach a woman. “Tell her you’re name, tell her she’s pretty, and don’t tell her you’re unemployed.” Cleavon successfully employs that strategy with Falinda (Meagan Good), but then has to worry about whether the gorgeous stranger will lose interest once she learns that the “bank” he works at is just a sperm bank.

As for Phil, he’s married with children, but his immature wife Koko (Jill Marie Jones) is considering leaving him for a womanizing NBA star (Darius McCrary). At the other extreme, Victoria would like to start to a family, but her reluctant hubby (Dondre Whitfield) doesn’t want any kids.

The tension builds in each of these scenarios en route to their eventual emotional resolutions. Yet betwixt and between are myriad moments of levity which serve as gentle reminders not to take it all too seriously. All the loose ends are tied satisfactorily by the time the curtain comes down, making 35 & Ticking an amusing look at the state of black-on-black romance in the 21st Century. 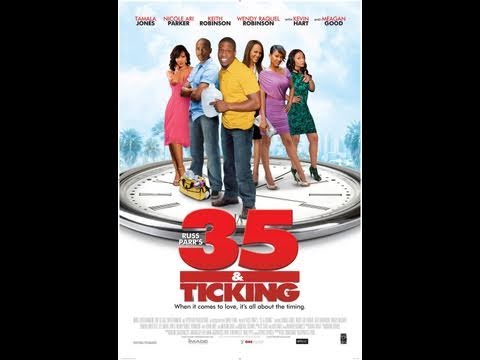