This is a low-brow comedy that has nothing more to offer than the commitment of its actors to do their best against insurmountable odds. The plot is infantile, the humor lame and the characters flounder under the weight of having nothing of worth to say.

Nick (Jesse Eisenberg) delivers pizzas for a living and shares an apartment with Chet (Aziz Ansary) whose sister, Kate (Dilshad Vadseira), Nick is secretly in love with. Meanwhile, Dwight (Danny McBride) tires of the verbal abuse he receives from his wealthy father (Fred Ward), and enlists the help of his buddy, Travis (Nick Swardson), to hire a hit man to murder him. The cost of the hit man is $100,000 so, to raise the money, Dwight and Travis involve an unsuspecting Nick in their plan. 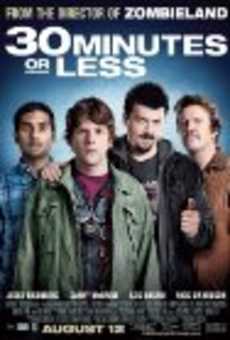 Nothing any of the characters say or do tells us anything about them. We know Nick delivers pizzas for a living but have no idea if this is where his aspirations lie. We learn equally little about Chet, who we meet when he’s having a blow job in a car, which is totally irrelevant to what happens in the film, thus making it seem as if the writers are incapable of creating anything more consequential, and instead make do with a time-filler that insults the audience’s intelligence.

These insults continue to the end. Dwight and Travis are the dumb duo we have seen a billion times before, but instead of actually doing something dumb, the two create a sophisticated device because that’s what they need to do to fit in with the story. This one-size-fits-all plotting also applies to why they choose Nick as their victim in the first place, and to Nick himself, who actually doesn’t even go on Facebook (the only LOL line in the entire movie), but then suddenly has enough geek knowledge to reprogram the sophisticated device that the two idiots miraculously created. It’s bunkum at its most convincing.

Jesse Eisenberg is obviously the latest hot thing in Hollywood and is no doubt already contracted to appear in a plethora of big budget movies in the next couple of years, whether the role and script are worthy or not. No one can blame this ex-starving young actor for taking the proffered seven-figure pay checks, and as long as audiences are happy to keep shelling out to watch drivel like this, then his career is assured.