The latest incarnation of James Bond 007, Skyfall, is a reflection of a meltdown in the Eurozone, where an aging 007 (Daniel Craig) has to fight-off not only his ‘accidental’ death but the utter collapse of MI6, the intelligence agency he has represented for more than 50 years.

Bond’s nemesis, Roual Silva (Javier Bardem), asks him, “What is your hobby?” Bond replies, “Resurrection,” a recurring theme in many superhero films lately. They all seem to be coming back from the dead after 9/11 and collapse of financial markets in 2008 – the old world paradigms giving way to the thrust of the new century. 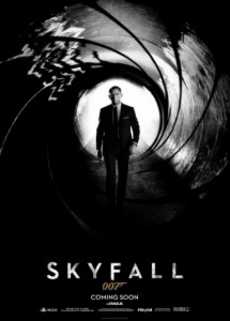 The story is as follows – an operation in Turkey fails, where Bond takes a bullet and is presumed to be dead. Someone inside the agency leaks the identities of all the MI6 agents and blows up the agency with a cyber-attack. The security breach is traced to the South China Sea, but it turns out to be none other than a disgruntled former agent, who was earlier carrying on cyber-attacks on the Chinese government and businesses.

It is indeed the twenty-third spy film to be released by the Bond franchise, originally conceived by Ian Fleming in the 1960s. If the film tackles the intelligence challenges Europe faces today in an emerging multipolar civilization, the Bond franchise itself may be witnessing a rite de passage. Skyfall was released in the UK exactly on the half-century mark, which started with a bang, with Dr. No.

At The Box Office

It took $78 million on its international release. According to Hollywood Reporter, “In France, Skyfall drew $10.5 million from 825 situations. Russia opened to $8.3 million at 951 locales. The South Korea bow scooped up 49% of the market with $5.9 million from 753 locations. Skyfall set an opening record for a Bond title in Brazil ($3.1 million) and drew $1.5 million in Belgium.”

The compelling plot brings espionage back home to London, while plumbing the psychological depths of the world’s well-known spy agent. Inside the spy thriller – with fast cars, beautiful women, and great locations – Sam Mendes, the Oscar winning director has packed a psycho-thriller between Bond, Silva and M (Judy Dench), the good agent, the bad agent and “the Mom,” respectively.

The oedipal triangulation works well to advance the storyline leading to a denouement worth the wait. We learn about Bond’s parentage, where he grew up, and understand his motivation for the life-threatening and grueling work. Yet, the larger than life agent is reduced to a mere mortal; he seems to have lost his step and suffers a hard fall.

As the agent faces a near-death experience, it behooves to be introspective; the film maker forces us to reflect on our predicament in the fast changing world. We see a middle-aged Bond with his libido under wraps, gasping for air under and above water, constantly on the run for his life in Istanbul, Shanghai, South China Sea, London and the Scottish countryside, which happens to be the place of his heroic birth.

During the rehabilitation, Bond goes through psychological assessment, consisting of a word-association test, an x-ray of the psyche. The psychologist presents a word and Bond replies without delay:

Skyfall. Bond hesitates a bit, but then utters “Done.”

There are barely any Bond escapades – with women in their skimpy bikinis – as if to represent the former colonies at a beauty pageant. There are two new Bond girls (Berenice Marlohe and Naomie Harris), but they play rather staid roles almost always elegantly clothed, shades of post-feminism changing roles.

The spy thriller borrows elements from the superhero comics – Superman or Spiderman – and partly has the dark look of the sci-fi cult film, ‘The Highlander,’ which starred the original Bond, Sean Connery. Especially in the latter half when Bond retreats to his Scottish birthplace to protect M, the picture explodes with a violent obsession with mythic immortality.

The villain keeps dropping cryptic messages on M’s laptop: ‘Think on your sins.’ M realizes it is an agent that she, the Mom, had ‘abandoned’ in a prison ‘to die like a rat.’ Bardem is convincing as an evil villain, with bleached blond hair and shades of Anthony Hopkins from ‘Silence of the Lambs,’ especially when he speaks with a Spanish accent and wishes to destroy a revered British institution.

Age Catches Up With M And Bond

M and MI6 come under scrutiny and governmental review. Unable to keep up with the new cyberthreats, her boss Mallory (Ralph Feinnes) tries to push M out, while urging Bond to remain dead. M vows to hang in there with her favorite agent. When she is in the process of explaining the nature of the new threat as dangerous and opaque at a public hearing, the British parliament itself comes under attack. Both M and Bond find themselves scurrying for Winston Churchill’s hidden bunker, with the help of a hi-tech Q (Ben Wishaw), in London’s subterranean tunnel system.

Mendes wanted to make a Bond film at the edge of the contemporary reality, thrusting Bond into the age of terrorism and cyber warfare, while revealing his true character. “In this movie, Bond is pushed to the limit, it kills him in a sense, brings him back and he’s a shadow of his former self,” Mendes said. This is why, perhaps, the British critics have almost unanimously found this Bond more real and appealing.

When Bond suddenly turns up at his estate in Scotland, his housekeeper Kincaid (Albert Finney) who has not seen him in many years asks, “What are you doing here?” “Some people are trying to kill us. We will kill them first,” replies Bond.

Adele (Grammy-winning Bond aficionado) lends her silky voice to an ode to the end of the world as we know it:

This is the end

Hold your breath and count to ten

Let the Skyfall, when it crumbles

We will stand tall, and face it all together