The Haunting of Molly Hartley (PG-13 for violence, terror, teen drinking, brief profanity and mature themes) Haley Bennett handles the title role in this horror flick about a 17 year-old’s desperate effort to escape from Satan after she learns that her parents once entered into a pact with the Devil in order to safe her life.

The Other End of the Line (PG-13 for suggestive material) Globalization romantic drama about a credit card company operator (Shriya) from India who travels from Mumbai to San Francisco to rendezvous with a customer (Jesse Metcalfe) she fell in love with on the telephone. Catch is, he thinks she’s American. 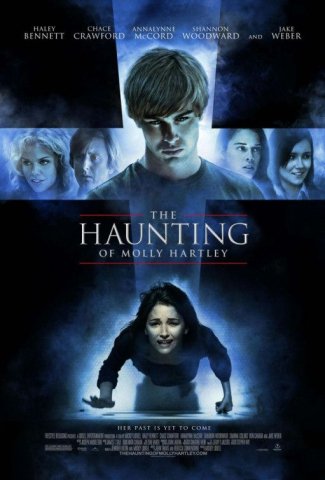 The First Basket (Unrated) Hoop documentary explores the impact of pioneer Jewish athletes on the evolution of basketball from a street game played in inner-city tenement alleys to the phenomenally-popular professional sport loved the world over.

Monks: The Transatlantic Feedback (Unrated) Musical bio-pic about a counter-Beatles rock group, started in the Sixties by five American GIs stationed in Germany during the Cold War, generally credited with creating the industrial, punk, heavy metal and techno sounds.

My Name Is Bruce (Unrated) Bruce Campbell plays himself in this comedy about a B-movie, horror flick star who finds himself forced to play his most famous role in real-life by fighting a monster wreaking havoc in a small town in Oregon.

One Day You’ll Understand (Unrated) Holocuast docudrama, based on Jerome Clement’s autobiographical novel, set in the Eighties, recounting a Frenchman’s (Hippolyte Girardot) obsession with determining what happened to his Jewish grandparents who perished in a concentration camp during World War II. (In French with subtitles)

Splinter (R for violence, gore and profanity) Horror flick about a young couple (Jill Wagner and Paulo Costanzo) on a camping vacation who join forces with their carjackers (Shea Whigam and Rachel Kerbs) when they find themselves being pursued by a voracious parasitic creature.