Edge of Darkness (R for profanity and graphic violence) Mel Gibson stars in this remake of the BBC mini-series about a veteran homicide detective who uncovers evidence of political corruption, governmental conspiracy and a corporate cover-up while investigating the murder of his environmental activist daughter (Bojana Novakovic). With Ray Winstone, Jay O. Sanders and Danny Huston.

When in Rome (PG-13 for suggestive content) Romantic comedy about a lovelorn New Yorker (Kristen Bell) who suddenly finds herself being pursued by an army of ardent suitors after stealing some magical coins from a fountain in Rome. Ensemble cast includes Josh Duhamel, Dax Shepard, Anjelica Huston, Will Arnett, Jon Heder, Bobby Moynihan and Peggy Lipton. 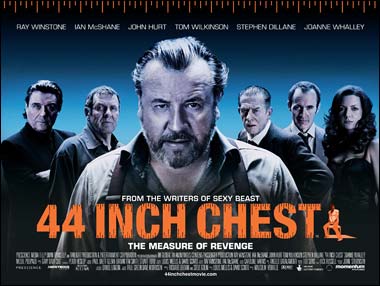 Falling Awake (R for violence, pervasive profanity and brief sexuality) Romantic musical about an ambitious, young guitarist (Andrew Cisneros) determined to play his way out of his crime-infested Bronx ‘hood with the help of his beautiful girlfiend from Brooklyn (Jenna Dewan). With Nestor Serrano, Julie Carmen and Chris “Kazi” Rolle.

For My Father (Unrated) Tel Aviv, terrorism nailbiter unfolding over the course of a tense weekend during which a triskelion of loners’ lives intersect: one, a Palestinian suicide bomber (Shredi Jabarin) from Nablus; another, a disowned, 17 year-old rebel (Hili Yalon) from an orthodox Israeli family; the third, the embittered owner (Shlomo Vishinsky) of a hardware store in a busy marketplace. (In Hebrew with subtitles)

Off and Running (Unrated) Blended-family documentary about the challenges faced by a Jewish lesbian couple living in Brooklyn while raising three adopted children of Korean, African-American and ethnically-mixed heritage.

Saint John of Las Vegas (R for nudity and profanity) Steve Buscemi stars as the title character in this dark comedy about a cured, compulsive gambler who finds himself tempted again after being sent by his boss (Peter Dinklage) to the City of Lost Wages to investigate a suspicious insurance claim. With Sarah Silverman, Romany Malco, Emmanuelle Chriqui, John Cho and Tim Blake Nelson.