Zoe is a versatile entertainer, and she has followed in the footsteps of both parents. In music, she fronted two bands, Elevator Fight and Lolawolf. In acting, she enjoyed a prolific and meteoric rise recently.

This spring, six films with Zoe were released in theaters. Among them were the Insurgent and Mad Max: Fury Road blockbusters. Plus, Good Kill, The Road Within, Dope and Treading Water.

Today, she talks about life and her latest movies.

Zoe Kravitz: No worries, Kam. How are you?

KW: Great, thanks. I don’t know whether you’re aware that I’ve interviewed both your mom and your dad.

KW: Also, the headline, when I interviewed your mom, read “Lisa Bonet Ate No Basil,” which I assume you know is a palindrome.

ZK: No, I never heard that before. That’s cool, too.

KW: How do you explain your career taking off this year? You’re in a half dozen new movies this spring: Insurgent, Treading Water, The Road Within, Good Kill, Mad Max and Dope.

ZK: I don’t know, man. I’ve basically been working really hard for the past couple years. And the nature of the film business is that movies come out when they come out, and these all just happen to be coming out at the same time. [Giggles]

KW: How did you enjoy making Mad Max: Fury Road?

ZK: It was good. It was really intense. It was a very long process. It was a six- month shoot in Africa. And it was crazy, Kam. I mean, the stunts were kind of crazy, and they were all shot at real speed. The costumes were insane and the conditions were really harsh. So, it was a very intense film to make, but well worth it. 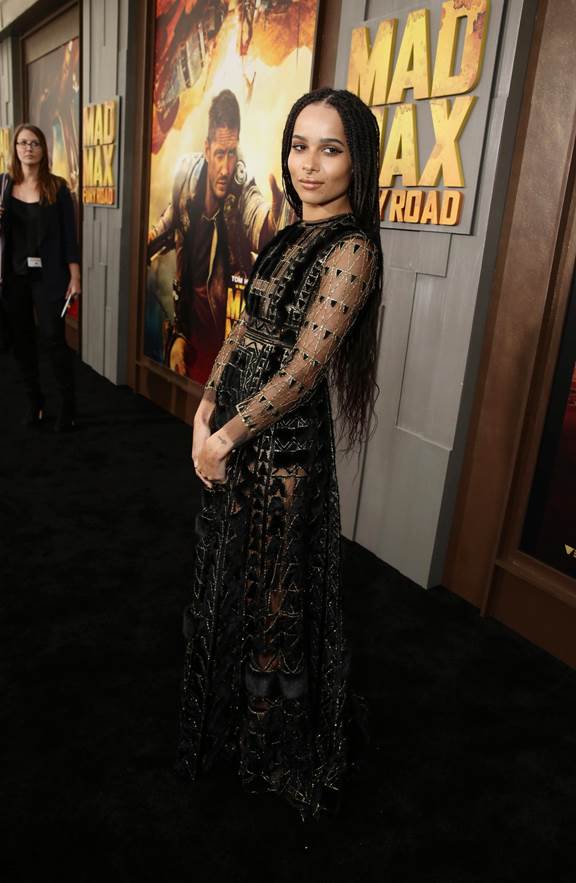 KW: Is it fair to assume that making Mad Max was more like shooting Insurgent than your other new films?

ZK: In some ways, yes, but I don’t even know if I can compare it to Insurgent. Mad Max is kind of like a beast of its own.

KW: What interested you in Good Kill, which is an excellent film? There, you play drone co-pilot Suarez, who is a pretty complicated character with an intriguing arc.

ZK: Thank you so much. When I read the script, it read like a science fiction film. And Andrew [writer/director Andrew Niccol] is known for sci-fi. But when I spoke to him, he said this picture was 100% factual, which blew my mind. I realized then how little I knew about the drone program. And I felt that, if I knew so little about it, there must be others who should be educated about what’s going on. So, first, I wanted to be a part of the project because I thought it was an important story to tell. On top of that, it’s rare to find roles for strong, young, feisty women, especially in a military film. And I love that Suarez ends up being the moral compass of the story, and that she’s also brave enough to stand up to all these men.

KW: I also thought you were great in Treading Water. What made you decide to play the love interest in that offbeat romantic dramedy?

ZK: I just found that story so bizarre. [Laughs] It’s a very sweet love story wrapped around an outlandish premise.

KW: Yes, it’s definitely unique. Editor Lisa Loving says: Zoe is super-duper cool. Just watching the trailer for her new movie with Dev Patel, The Road Within, made me cry.

KW: She asks: What’s the secret of your mother, father and stepfather getting along so well?

ZK: I don’t know what the secret is. We’re a family… We all love each other… and we’ve all worked through whatever issues there’ve ever been, and in a healthy way. So, we all get along. Love conquers all, I guess.

KW: Sangeetha Subramanian says: Hi Zoe! They say it takes 90 days to get in the grove of a new job. Do you feel like you’ve been getting enough time to prepare for each new project lately?

ZK: This might surprise you, but I do feel like I have, because the shooting of all these films was spread out, for the most part. They just happen to be coming out at the same time.

KW: Children’s book author Irene Smalls asks: How do you prepare for each new role?

ZK: It kind of varies. I don’t have a method yet. It depends on the script and the character I think I need. I’ve worked with acting coaches, researched roles, and channeled different parts of myself. It’s on a case-by-case for me, right now.

KW: Harriet Pakula-Teweles says: At just 26, you already have a solid background in various fields: acting, singing and songwriting, modeling and designing. Which feels the most comfortable, and what direction do you hope to take in the near future?

ZK: Music and acting are the most prominent. But I don’t like to compare them, since they’re both very, very important to me.

KW: Editor/Legist Patricia Turnier was wondering whether your having mixed ethnic roots might have played a role in your eating disorders. She asks because she knows several people struggling with society’s tendency to narrowly define beauty. Do you think women are unfairly judged by their physical appearance?

ZK: I do think women are unfairly judged by their physical appearance, but I don’t think it had anything to do with being mixed-race. In my opinion, mixed-race people are the most beautiful.

KW: “Realtor to the Stars” Jimmy Bayan asks: What would be your dream spot to live in L.A. and in the world?

ZK: I can’t say about L.A., because I don’t live there. I love the Bahamas. Our family is from there. I also like Berlin and would love to live there for a while.

ZK: [LOL] No, I might not even know until someone asks me the question.

ZK: It depends on the day.

ZK: I haven’t read a book in a long time. I’ve just been reading scripts lately. It’s terrible. [Laughs] I think the last one I read was the entire Divergent series. [Laughs]

ZK: Squash and quinoa and kale and salmon.

ZK: I don’t know. I always say Alexander Wang because he’s one of my dearest friends and he’s the one I’m most familiar with. I don’t know a lot about designers’ names.

ZK: It sounds like a silly pageant answer, but world peace.

KW: That’s not silly at all, since this is a time when it’s really needed. Harriet also asks: With so many classic films being redone, is there a remake you’d like to star in?

ZK: Ooh! That’s a hard question, because I believe “If it ain’t broke, don’t fix it.” I’d have to think about it.

ZK: I remember playing at my grandmothers’ houses when I was about 4 or 5.

KW: The Melissa Harris-Perry question: How did your first big heartbreak impact who you are as a person?

ZK: I think it probably just taught me that you will always heal. That this too shall pass. The first time you feel that sort of pain, you think it’s never going to go away. Once you do survive it, you realize you can survive anything.

ZK: Well, , at home, I’m in sweatpants, I’m not wearing any makeup, and I’m not standing with my hand on my hip while smiling. [Laughs] I try to be honest in interviews, but obviously you have to be careful about everything you say and do when you’re being recorded. I’m much more comfortable and quieter at home.

ZK: Earlier today. I like to laugh a lot.

KW: What was your first job?

ZK: I never had a real job. I started acting in high school, and then I started working. So, I never got to have that experience.

ZK: All the time.

ZK: Be confident, and just do it. It’s all about not questioning what everyone else is thinking, since they’re probably looking to others to know what is or isn’t cool.

KW: Attorney Bernadette Beekman asks: Do you have a favorite charity?

ZK: No, not one favorite, I’ve worked with a few different charities, including one in Africa dealing with the AIDS epidemic. I also like helping people who need food.

ZK: Again, as genuine. I think the best that you can do is stay true to who you are, whatever that is.

KW: Your parents are two of the most grounded and normal celebrities I’ve interviewed. And you strike me as just as real and accessible.

ZK: Oh, thank you so much. I appreciate that, since that’s all we really have.

KW: What’s in your wallet?

ZK: A Metro card, a credit card, a few dollar bills, and a chai tea card. After I buy a certain number of cups, I get a free one.

KW: Thanks again for the time, Zoe, and best of luck with all your films. And I hope to speak to you again soon.