In an extreme makeover in style if not temperament, Meryl Streep switches identities from the boss from hell in The Devil Wears Prada to, well, a fierce maven on the subject of hell in John Patrick Shanley’s Doubt, and what might be termed, The Devil Wears A Habit.

As Sister Aloysius Beauvier, the principal of an austere Bronx, NY Catholic school with an eerie, punitive gothic atmosphere, Streep excels in hounding, with the help of an impressionable young nun (Amy Adams), a kindly resident priest (Philip Seymour Hoffman) who has taken a special interest in the first African American student (Joseph Foster) at the school, as to possibly inappropriate motives. Streep shared thoughts about religious sexism, and compared and contrasted the challenges for actresses and nuns, especially when having to deal with buttons, wool gabardine and rose bushes.

What was the big challenge of this movie for you? 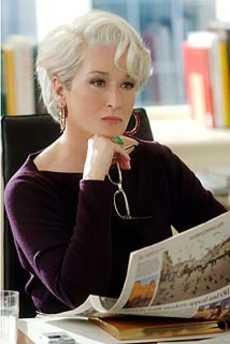 MERYL STREEP: Sometime really good writing does you a disservice as an actor. Because you can get lazy. It’s doing a lot of the work for you. I guess that’s good. But at the same time with material that’s not so good, you have to be more inventive, because no thought has been applied to it.

That happens in movies. In movies! But a really, really great tight script, it gets right back to you. So the first reading of this script was particularly exciting. I thought, ‘Oh whoo! I don’t need to do anything.’

Wrong. That was a great first read. And then like all actors, it all falls apart and you find out what you don’t know. So that was sort of a luxury, to have a great script. But it also somehow stops the invention.

Did you draw from any personal life experience to play that mean nun, Sister Aloysius?

MS: I didn’t go to Catholic school. But I really wanted to! Because I lived in New Jersey, and everybody in my town went to the public school like I did. But there was this whole group that had the kilts and the blazers, and they went to the Catholic school, Our Lady of Perpetual Help.

I went to Mass there because they were still saying the Latin Mass. And I remember when they changed, we were all, ‘Oh! it’s so terrible.’ It got to be in English, and they played guitars. And we all hated that.

Jackie Kennedy went there when she would come out to ride her horses in that part of New Jersey. And it was a very mysterious and compelling service.

Right near where I lived was St. Elizabeth’s Convent, which was the home base for the Sisters of Charity. And there was a tomb which had – I kid you not – a glass coffin and a little nun inside. When I was in high school, this was a destination. I did deep research.

But I love mystery, and I read the Lives of the Saints when I was a kid, because it was so gruesome! This is not about the Catholic church. It’s about who thinks they can control evildoers with force and a firm hand. And an unrelenting, we will not negotiate [with terrorists].

Or there’s another approach with all these layers of humanity who think you have to have innocence, so it doesn’t go bad and get corrupted. There is so much humanity in this piece, that is above and beyond the church. But the reason it’s so good, is because of its specificity.

Any thoughts about gender issues in Catholicism?

MS: The priest had complete freedom. This is a man’s world! Sister Aloysius is presented as the boss of this school. But she was not. He outranked her.

MS: There were a lot of rose bushes! And lots of prickles in them. And that burlap would get caught on them, wrapping the flowers. And I don’t know, maybe there were two cameras. Let’s just say yes, there were!

And there was a lot of back story and stuff, that I thought was really important to my character. Since I had not gone back, when we started rehearsal, and I had read the play. Once I got to the school play, I wanted that to be our story. And I didn’t want to be confused by that.

Amy [Adams] though, made herself an expert on the play. And she said, you know you’d have a lot of fun cutting it out. I thought she was right, actually. And most of everything that had been cut out was crammed into the rosebud scene! I mean it was shot, and then it was cut out.

Talk about your look in the movie.

MS: It’s a very specific look at the Sisters of Charity. And the founder was a mother of five children when she traveled with her husband to Italy and lived there. And they thought it would be good to go to the southern part of Italy.

And he actually got ill over there, and died. This was the 1830s, and she dressed in the widow’s weeds of an Italian lady of the town. And she just wore those clothes. And then she came back to the States. She was an Episcopalian, and she did good works.

When she was there, she fell in love with Catholicism. And when she came back, she joined their teaching order. That was what they wore, and she just never changed. But it’s interesting. It’s like Little Women! And that round hat and little bow.

But there are no zippers, and there are no fastenings. There are just buttons. And ties. There’s quite a bit, it’s quite elaborate. And there’s a slip underneath, and a chemise. And then a cassock like the priests have, and then a cape. And all made of wool gabardine.

And in 1962, there was no air conditioning. So they were always coughing. And I said to a Sister, didn’t it get so hot? I get hot in the studio! And she said, oh we’d just be hanging out the window, or on the balcony. Just airing out!

And we went up to Saint Vincent’s College where we shot part of it. And we visited a retirement home for the Sisters and talked to them. And they were extraordinary, extraordinary people. And the Sisters of Charity gave up the habit, within two years of that.

What was that special moment like, when you signed on with John for this part?

MS: I don’t remember! I think we just started when we started. That’s what I remember, is walking in for the first reading. But we met before that, in another context. Yeah. But I loved that place so much. And the cherry blossoms in that park. It was so awesome.

And I remember saying, why not get Cherry Jones [Sister Aloysius in the stage production] to play the part. And it was all about money. That made me feel better! But I never felt like I was stealing things from her.

And I never felt that there was a template about how she should be played. And there was a lot of plot that I couldn’t remember. Even now!

Did you need the director when you had your own doubts?

MS: You go in the scene and listen. That’s where all the answers are. I mean, no offense to the director! That’s the reality. And he was amazing. He wrote this and we’d do something in a rehearsal and he’d go, ‘I never thought of it that way. That’s all right!’

You know, that’s gigantic, because it opened the doors. It made us think we were able to break down what we perceived as a very successful rendering.

So even though you’re the accuser in this movie, do you, Meryl Streep, think Hoffman’s character really was guilty or innocent?