Everybody loves to watch you in movies, but what do you like to watch?

LEONARDO DICAPRIO: I like movies! No, I like theater too. And paintings are great, and all of that! But to me, the great sort of artistic medium I think, of our time, is film. I really feel that. I mean to me, there’s nothing else out there, where I can sort of suspend disbelief for two hours.

You know, if a film is good, and I’m sort of able to sit there and absorb myself within that world. And get lost. That is a pretty powerful tool. And there’s not many paintings out there, that make me want to stare at it for hours at a time, and wonder where I am! 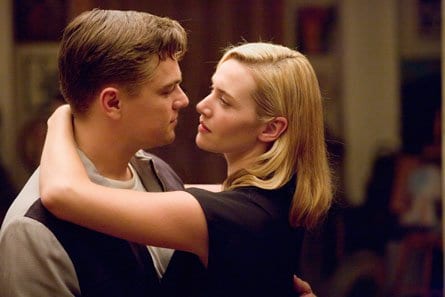 Do you watch stuff at home, or do you have a private screening room there?

LDC: I watch a lot of Turner Classic movies, I do. But I don’t do private screenings. I don’t have the old school, reel to reel projectors. I do have a big screen TV, though. And a DVD player!

So what’s up with this really bad movie marriage in Revolutionary Road?

LDC: I’m heroic. And cowardly! Which is the truth. And that was what was fun about playing Frank, I really liked that. He’s ultimately a product of his environment, and he doesn’t have the courage to manifest any sort of tangible change in his life.

You know, on the one hand he wanted to risk everything for a new opportunity, or pursue the dream that his wife once had, of what she wanted to be. But ultimately, my character is my father’s son. I want to conform to my environment.

And ultimately is it about two people who don’t communicate enough? I don’t know if that’s the truth. I think it’s about two people who are being forced apart, but are desperately trying to salvage their marriage, and stay together. But I think their trains are on different courses.

And you know, the facade of what running off to Paris represented, the ideals of what Paris was to them, it was an opportunity that could or could not have resulted in something positive or tangible. But I think they’re people that were ultimately being forced apart, by different intentions of what they wanted their lives to be. That’s all.

After not working with each other for so long, were there any surprises for you and Kate, being together again?

LDC: Well, Kate and I have remained close friends for many, many years. Since Titanic, I think we’ve both been looking for the right project to do together. And, it was just the fact that Sam [Mendes] was attached to this, and that this was a great piece of material. And such a departure from what we’d done before.

You know, this wasn’t at all treading on similar territory. And we knew, that is a complete setup for disaster! You know, having done the film we did in the past, Titanic. So we knew we needed to try something completely unique.

And it was just about finding that project. And this was something that Kate was shepherding for many years, and put all the pieces together. So I just felt very fortunate to be chosen for it.

Did you find Kate to be a different woman in any way, after all this time?

LDC: As far as how Kate has changed or not changed, I think that, the truth of the matter is she’s always had that sort of pursuit of excellence within the characters that she plays. She’s got an unbelievable work ethic that she’s retained ever since I knew her in her early twenties.

LDC: You know, she cares about the movie being great, and the other actors involved and everything, that’s all still there. But what has changed I would say, since Titanic, is that she’s done quite a bit of work, as have I. And we don’t approach the work as we did in our twenties.

You know, we don’t approach the director or producers involved, as parental figures! Which is what I feel we did in our teenage years. We were constantly looking for that guidance. I think we come into this movie now as equal pieces to the puzzle.

You know, we bring in our own ideas as to what we feel the movie should be. And for lack of a better term, we’re more like…adults! Whatever that word means!

What was most exciting for you about playing Kate’s lover and not just her spouse in the movie?

LDC: That we have the best intentions for each other. So we can be brutally honest, and brutally savage with each other on screen. And we trust each other in that regard. So that was stuff that I was looking most forward to. And I think it was…fun!

Do you feel you’re playing a bad guy here, or just a weak man?

LDC: Hmm, where do I begin…I don’t know, I think what’s interesting about the story and these characters, is that the sympathy shifts constantly. You know, where you sorta think that Frank is despicable at the beginning for cheating on his wife. And then later you realize that he’s the one trying to salvage the relationship

So who is a hero and who is not a hero, I don’t know. I just loved playing a character that just slightly fell short of his ambitions. I felt it was just a compelling thing to do. You know, he just did not have the courage at the end of the day, to follow through with the life he wanted. He would be happier conforming to his existence.

Now to me, I felt the 1950s period was a huge component. You know, this is the era of prescription medication. This is when people started moving to the suburbs and becoming alcoholics. And, you know, having that symbolic American iconic family existence. And it drove a lot of people nuts.

And I thought, as much as that was a product of the movie, once we did the film, a lot of that just kinda stripped away, you know? And a lot of that just became a backdrop to the emotional drama of these characters’ lives, sorta unraveling. So that’s what was interesting about it.

What turned you on about being directed by Sam?

LDC: He let us unleash our characters. And express all our doubts and disbeliefs about our characters, and what we felt. And he listened to a lot of that, and asked us these sorts of very penetrating questions. But sometimes that can be jarring, especially in the middle of a scene.

Like he’d stop us and ask, what do you think your character is really doing this for? And you have to stop and admit, wow. I actually didn’t think of that! Like, I have to admit you were right. And I should have an answer for that, but I don’t. Um…Let me think about an answer!

And that kind of stuff, it gives you all that subtext that you need. And…I could go on and on about it. But I think you get the picture!