Naturi Cora Maria Naughton was born on May 20, 1984 in East Orange, New Jersey where she started singing in the choir at New Hope Baptist Church at just 5 years of age. She turned pro by 14, when she became a member of the girl band 3LW. The group soon signed with Sony/Epic Records and went on a nationwide tour while their debut album, entitled “3LW,” went platinum, selling 1.3 million copies.

Away from the entertainment business, Naturi always remained an honor student, attending Seton Hall University where she majored in Political Science until her career became too demanding. Just before her junior year, she joined the Broadway production of Hairspray as Little Inez. As gifted as the gorgeous newcomer may be, she remains humble and grateful to God for her blessings, and praises her parents for supporting her dreams and for raising her with so much love, encouragement, and faith. 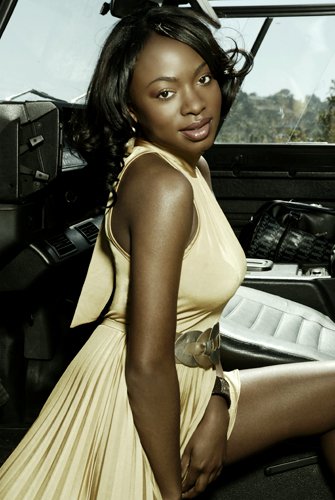 Here, Naturi talks about her performance as Lil’ Kim in the much-anticipated motion picture, Notorious, a bio-pic about the late rapper Notorious B.I.G. (a.k.a. Christopher Wallace). In addition, she recently landed a lead role in the re-make of the screen version of Fame, the 1980 musical revolving around students at the New York Academy of Performing Arts.

KW: Hi Naturi, thanks for the time.

NN: No problem, thank you.

NN: Well first off, just the fact that it was a biopic about Biggie Smalls. I was a fan of Biggie growing up and I felt it was about time that someone told his life story.

KW: What song of his is your favorite?

KW: What did you think of the East Coast-West Coast turf war? Whose side were you on?

NN: I think it was senseless and I am so glad that we have risen above that East Coast – West coast rivalry. I’m from the East but I never felt like I had to choose a side…Both coasts have made great music.

KW: Who do you think killed Biggie?

NN: I have no idea and that’s why his death still hurts so many people to this day. His murder is unsolved.

KW: How would you assess Jamal Woolard’s work in the title role?

NN: Jamal killed it! He captured Biggie so well, it was scary at times. He was made for this role and I had a great time working with him.

KW: How was it to make your screen debut with such a talented cast which also included Angela Bassett, Derek Luke and Anthony Mackie?

NN: Wow! I still can’t believe it. I feel so honored. These actors are people that I looked up to and admired, and here I am, making my debut in a movie with them. It’s really a dream come true!

KW: How did you prepare to play Lil Kim?

NN: I studied her… HARD! I watched her in videos, stage performances, behind the scenes footage, and listened to her voice in radio interviews. I also read a lot of material that the director [George Tillman Jr.] gave me about Kim’s back story. It helped to understand her struggles as a child growing up in Brooklyn. I even went to Brooklyn and spent time in her neighborhood. Talking to the guys from Junior Mafia, especially Lil Cease, helped me out a lot too.

KW: Has Kim seen the film? What does she think of your portrayal of her?

NN: I don’t know if she has seen the film, but hopefully when she does see it she will be proud of my portrayal.

KW: Is it true that you’re planning to do a duet with her on your debut album? How would describe your sound?

NN: I don’t actually have an album coming out any time soon. A lot of people are referring to my song “Real Chicks” which was a song I wrote and recorded way before I even knew about Notorious. It’s crazy because, back then, I was working with producers from “Full Force” and we thought it’d be hot to get Lil Kim to do a verse on the song. So they made it happen. We never actually did that song in the studio together, though-the song was done and then we put Lil Kim on it. But this all happened over a year before my first audition for “Notorious.” Little did I know that I would soon be playing her in a movie. I am still looking forward to doing solo music. I am just waiting on the right situation and the right team to put it all together. I don’t just want a deal… I want a GOOD deal, so sometimes you have to be patient for that to come around. But when I make my album, it will be R&B with sprinkles of Hip Hop.

KW: You got your start in showbiz in music as a member of 3LW. How hard was the transition from singing to acting?

NN: I must admit, it is challenging and requires a lot of hard work. Growing up, though, I always knew I would be a singer and an actress. I just felt it! To me, singing and acting have always gone hand and hand. Even though my career started off as a singer, there is still a level of acting you have to bring to be an artist. Singers have a lot in common with actors because you have to dig deep into a song and show the audience what you are feeling as you sing. You have to be expressive and vulnerable as a singer which is some of the things you have to do to be a good actor. I’m still learning what it takes to be a great actress, but I don’t feel like I am in completely foreign territory.

KW: Which do you prefer at this point?

NN: I want it all! I love to sing…it’s in my heart and it’s a major part of who I am. But I also love to act…its organic. Growing up all my friends used to say “Naturi, you are soooooo dramatic!.” and I would think to myself, “Thank you!” [LOL]

KW: You’ve been on Broadway playing Little Inez in Hairspray for a couple of years. Are you going to have to leave the show in order to be able star in the remake of Fame?

NN: I have been on Broadway for two and one-half years. First off, I am so blessed to have maintained a Broadway gig that long. I loved my experience in Hairspray and I credit a lot of my acting success to that experience. I learned so much. But all good things must come to an end. I left the show on October 12th to take the role of Denise” in MGM’s Fame. I had a great run and I’m excited to start this new chapter of my life. I have recently started shooting for Fame and it’s been a blast. I’m so excited to be a part of such an amazing project.

NN: I feel so inspired because he achieved something that so many people said was unattainable. I feel triumphant! I voted for Obama and as a young person, it feels good to be a part of history. I believe in change and so many other things that he represents.

KW: The “Realtor to the Stars” Jimmy Bayan question: Where in L.A. do you live when you’re out there?

NN: I just keep it simple. I have a nice apartment right outside of L.A. I’m enjoying my experience out in LA. I am mad they don’t have a “Roscoes” back home in Jersey! [LOL]

KW: You’re originally from East Orange, New Jersey. Do you still have family there or live there yourself?

NN: I was born and raised there and most of my family still lives there.

NN: A lot of times…this is a scary business.

KW: Is there a question no one ever asks you that you wish someone would?

KW: Music maven Heather Covington’s question: What music are you listening to nowadays?

NN: I love Beyonce’s new album, I Am… Sasha Fierce. The song Halo is great!

NN: My advice is to be prepared for rejection, but never let people tell you that you can’t do something. If you think Big… you can achieve BIG!

KW: Do you have a website where fans go to hear a sample of your singing?

NN: Actually, yes. Go check out my MySpace page: www.myspace.com/naturinaughton. The song with Lil Kim, “Real Chicks” is on there and a few others.

NN: Yes, I do, on my MySpace. If it wasn’t for the fans, I would not still be here. They’re dedicated to me and I am dedicated to them.

NN: Professionally, I want to be remembered for how hard I worked and how I put my heart and soul into my work. Personally: I want people to remember my heart. I hope they say, “She really loved people!”

NN: Thank you so much. I appreciate it.