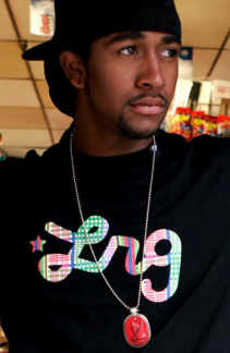 Omarion Ishmael Grandberry was born in his Inglewood, California home around midnight on November 12, 1984. The eldest of seven kids born to his parents, Leslie and Trent, he got a head start in showbiz, beginning with appearances in TV commercials for McDonald’s and Kellogg’s.

Turning his attention to singing and dancing as a teenager, Omarion ushered in the new millennium as the lead singer of the R&B boy band B2K. Despite the group’s considerable success, the blessed baritone left the group in 2004 to pursue a solo career. On his own, he earned a Grammy nomination for his debut album, O, which went platinum.

A versatile entertainer, Omarion has also developed into quite an actor in his own right. On television, he’s appeared on The Bernie Mac Show, One on One and Cuts, while on the big screen he’s been in You Got Served and Fat Albert.

During the summer of 2005, he found himself caught up in controversy after a publicist issued a press release requesting that fans pray for his safety in the wake of the terrorist train and bus bombings in London. Although he was in the city at the time of the attack, it turned out that he had never been in any danger. Consequently, “Pray for Omarion!” has since become a popular running joke resurrected as a humorous refrain by cynics during any disaster.

Safe and sound, here he talks about starring in Feel the Noise, where he plays an aspiring rapper from Harlem who moves to Puerto Rico where he continues to pursue his dream while bonding with the father he never knew.

KW: Was this role created with you in mind, or did you have to audition?

O: I wouldn’t necessarily say that I had to audition, because there really weren’t any other guys up for the role. But it was something that my agent found. He said, “Omarion, I think it would be great for your career. And it’s different from anything you’ve ever done, playing a young kid from Harlem who’s Puerto Rican and black.” So, I went and met with Jennifer Lopez’s production team. They told me what they wanted to do, and I felt like it would be a great opportunity.

KW: Given that your breakout role in You Got Served revolved around dancing, how did you feel about making this movie?

KW: Was J-Lo a hands-on producer?

O: Yes, she actually came down to the set, and she said, “Omarion, I saw some of the dailies. You’re doing a really, really great job. Keep doing your thing.” That she was so supportive was real nice.

KW: What’s the gist of the picture?

O: Basically, it’s about this character named Rob, who has a vision of becoming a rap star. And he’s facing adversity throughout the course of the film. Like the opening scene is his getting in trouble, going to jail and then being shipped to Puerto Rico where his father is who he does not know of. So, he’s dealing with a lot of issues inside of him.

KW: How was it working opposite Giancarlo Esposito who played your dad?

O: They cut it from the movie, but he actually made me cry during one really emotional scene between him and myself. And he wasn’t trying to. That’s the mark of a really great actor, when he can make you feel the emotion without having to search for it. And they know how to make you look good, too.

KW: How did you feel about the scene being cut?

O: Well, it made sense, because my character’s supposed to be pretty tough. So, he wouldn’t cry. [Laughs out loud]

KW: Why did you cry?

O: That’s just what I was feeling at the time. We did it a couple of times, and that’s really how I felt. As an actor, you really want to get your natural reaction, and it just got emotional. That’s it.

KW: What do you see as the message of the movie?

O: The moral of the movie is that, no matter what barriers are in front of you, you can conquer your dreams. That’s what I want young people to take from it. It’s never too late to follow your dreams.

KW: Did you have any trouble memorizing your lines?

KW: You’ve already proven to be quite a successful multi-talent and you’re only in your early twenties. Is there anything else you’d like to accomplish in show business?

O: Yes, I’m really inspired by people like Jay-Z and 50-Cent to develop more business savvy. I have a lot of creative ideas, and one thing that I’ll be pursuing next year is opening my own dance studio.

KW: the Jimmy Bayan question. Where in L.A. did you grow up, and what area of the city do you live in now?

O: I grew up in Inglewood, and I live in the Valley now. In the subs.

KW: Your next film, Somebody Help Me, is a horror film. Typically, in horror flicks, the brother is the first person to die. Do you die first?

O: No sir, that’s the great thing about that film. The black people don’t die first.

KW: That’s a relief. Thanks for the time, Omarion.