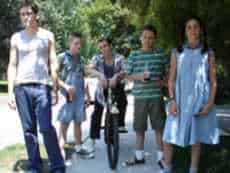 True Tale of Teen Torture Brought to the Big Screen

Left orphaned after the untimely deaths of their parents in a car accident, Meg (Blythe Auffarth) and Susan (Madeline Taylor) Loughlin found themselves suddenly adopted by their closest relative, Ruth Chandler (Blanche Baker), a single-mom already raising three adolescent boys on her own. Unfortunately, the authorities entrusting the girls to their aunt’s care had no idea the woman had some serious issues, specifically, that she was a severely disturbed sadist whose mind was spiraling towards madness.

And because Chandler looked normal to her neighbors, none would come to suspect the unspeakable horrors unfolding inside the soundproofed bomb shelter in the basement of her nondescript house on an otherwise quiet dead end street. Apparently, Ruth resented her nieces from the moment they moved in, and began taking it out on them immediately, both mentally and physically. 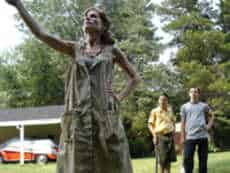 She involved her sons and one of their friends, David (Daniel Manche), in the torture, which came to focus on 14 year-old Megan, since her sickly younger sibling wore braces on her legs due to polio. Gradually, the mistreatment escalated from verbal abuse to beatings to bondage to rape and disfigurement, always with chain-smoking Ruth orchestrating the action. She would pressure the males to perform whatever atrocity she could dream up daily, first plying them with beer, afterwards threatening them with death if they told a soul about what had transpired.

This kinky scenario underpins The Girl Next Door, a harrowing crime saga adapted from the best seller of the same name by Jack Ketchum. Though his claustrophobic novel is set in suburban New Jersey in 1958, the story is loosely-based on an actual case of extreme cruelty involving a teenager that occurred in the State of Indiana in 1965. 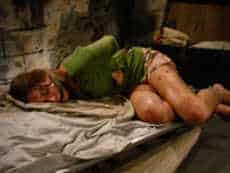 Directed by Gregory Wilson, this gruesome screen version paints a super-realistic picture that’s so relentlessly-disturbing it’s likely to trigger debate as to whether the filmmaker might have left too little to the imagination. Cleverly constructed as flashback flick narrated by David who appears briefly in a couple of present-day wraparounds, brace yourself for practically-pornographic horror fare far more frightening than the Scream trilogy.

A daring docudrama not for the squeamish. You wuz warned.