Jamal Weighs-In on His Reincarnation of Biggie Smalls

Like the late Christopher Wallace, aka Biggie Smalls, aka Notorious B.I.G., Jamal Woolard was born and raised in Brooklyn. He also raps under an alias, Gravy, and he’s even been shot in a drive-by. But Jamal not only survived the attack, but immediately went on the radio for a scheduled interview ay NYC’s Hot 97 before getting treatment for his wounds at a nearby hospital. Of equal import is the fact that he’s the spitting image of Biggie, which gave him an edge when Fox conducted a nationwide search for someone to play him in its new movie Notorious.

Consequently, Jamal is now making his acting debut in the title role of Notorious, surrounded by a talented cast which includes Angela Bassett as Biggie’s mom, Naturi Naughton as Lil’ Kim, Derek Luke as Sean “Puffy” Combs, Anthony Mackie as Tupac Shakur, Antonique Smith as Faith Evans and Sean Ringgold as Suge Knight. Here, he talks about landing his big break and what was involved in portraying the hip hop icon. 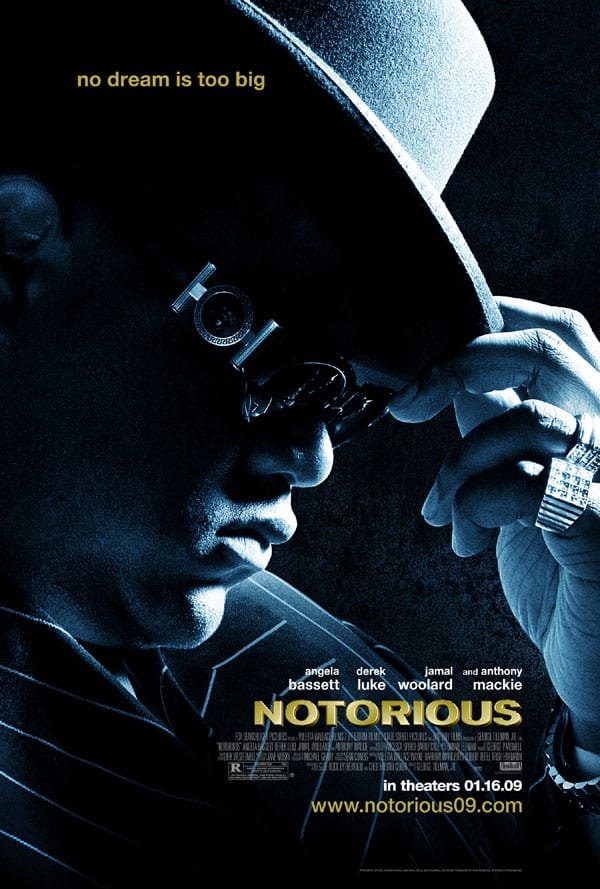 KW: Hey, Jamal, thanks for the time.

KW: So, how was it playing Biggie?

JW: Oh, man, it was the opportunity and experience of a lifetime.

KW: Where in Brooklyn did you grow up?

KW: Do you still have ties to the neighborhood?

JW: Yeah, definitely. My mom and my grandmother still live there.

KW: I went to high school on the spot where Medgar Evers College is now. Are you familiar with that area?

KW: Tell me about the time you got shot in Manhattan just as you were about to go on the radio.

JW: Nah, I don’t want to talk about that.

KW: Then tell me how you prepared to play Biggie, mentally and physically.

KW: Was that healthy?

JW: It was really life threatening, because I have diabetes. But I put myself into that zone in order to do what I had to do.

KW: Besides looking like him, what mannerism did you have to master?

JW: The walk – the wobble – mastering the shield – knowing when to use the left hand, how to talk to people, how to talk down to Kim, how to treat my moms, knowing when to be Christopher, when to be Biggie Smalls, when to be Notorious B.I.G. And knowing how heavy he was as Notorious and not to move too much. Knowing how to move and that I could be much faster when I was Biggie. Knowing his voice differences, too. So, there was a whole lot involved in preparing for the role.

KW: What was it like working with such a great cast?

JW: Oh, man, that was a blessing working with Derek Luke playing Puffy and Anthony Mackie playing Pac. Plus, they were veteran actors. I was new to the game and they coached me through it. That was the best thing about it, having their support.

KW: You know, Jennifer Lopez became a superstar after playing a murdered icon, Selena, in a bio-pic. This could happen for you, too. Are you planning to concentrate on movies now?

JW: I’m focusing on acting right now, but I’m trying to do a little of both.

KW: So, who do you think shot Biggie?

KW: Is there a question no one has ever asked you, that you wish someone would?

JW: I would have to say Biggie, Martin Luther King and Obama.

KW: How did you feel when Obama won the election?

KW: Have you gotten any feedback from anybody portrayed in the movie?

JW: Definitely. I got a lot of help and feedback from Faith [Evans]. I also got a lot of support from Lil Cease, Mrs. Wallace and the members of the Junior M.A.F.I.A.

KW: What’s up next for you?

JW: Like I said, acting is my newfound love. So, hopefully, some other things will come.

KW: Thanks again for the interview, Jamal, and best of luck with everything.

JW: Same here. Thank you so much.

To see a trailer for Notorious, visit:

ABOUT US
NewsBlaze is the alternative business and world news newspaper, with entertainment, music, politics, and the latest breaking news and videos.Visit the NewsBlaze Pressroom to see NewsBlaze in the News
Contact us: [email protected]sblaze.com
FOLLOW US
© Copyright (c) 2004-2022 - NewsBlaze Pty. Ltd.
Go to mobile version