Jada on the Radar

Maryland Native Jada Pinkett Smith studied dance and acting at the Baltimore School for the Arts and the North Carolina School of the Arts before getting her big break when she landed a role on the long-running NBC-series, A Different World. The multi-talented actress, producer, director and philanthropist continually challenges herself in a variety of ways.

Now, not only is she playing her first lead role in a TV-series on HawthoRNe, but she is also the show’s executive producer. Ms. Pinkett Smith’s recent work includes lending her voice to the role of Gloria in Madagascar: Escape 2 Africa. She previously co-starred in the remake of The Women, and is perhaps best known for her portrayal of Niobe in the The Matrix: Reloaded and The Matrix: Revolutions. 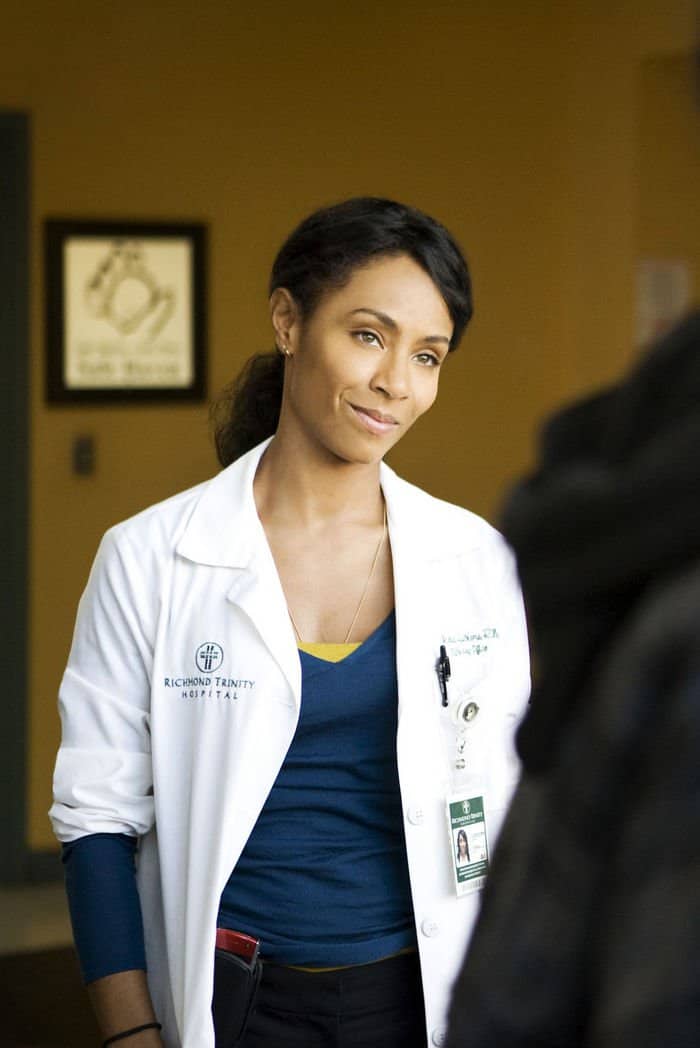 Choosing her roles carefully, Jada appeared opposite Adam Sandler and Don Cheadle in Reign Over Me for Columbia Pictures, as well as playing a pivotal role opposite Tom Cruise and Jamie Foxx in Collateral. Some of her other credits include Menace II Society, Jason’s Lyric, A Low Down Dirty Shame, The Nutty Professor, Set It Off and Scream 2, as well as voice work for Princess Mononoke. 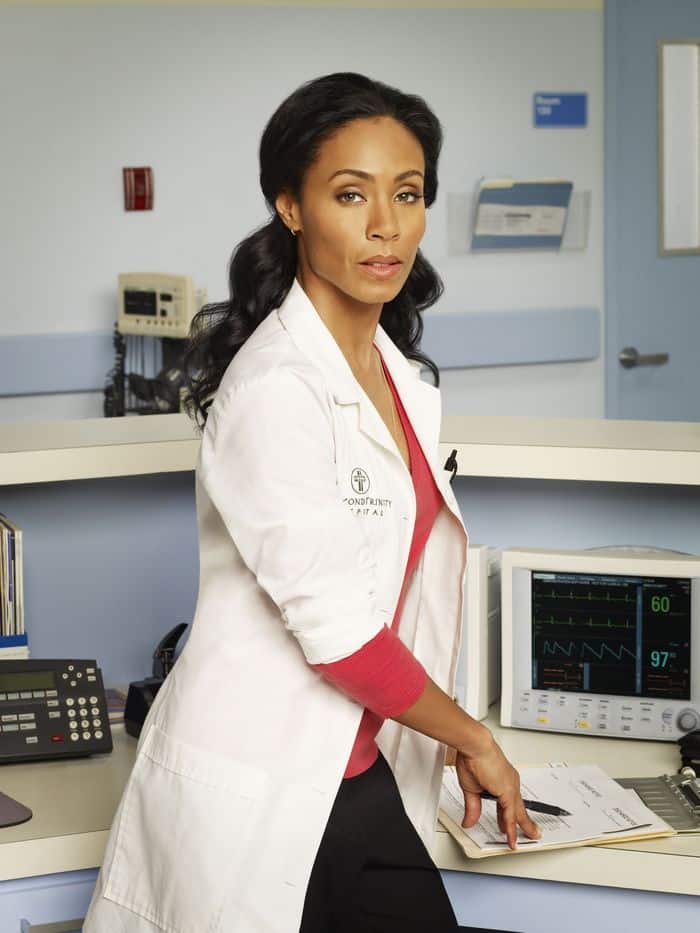 Just as she does in front of the camera, Jada continually challenges herself offscreen with new and exciting projects. For example, her eye for excellence helped her, as executive producer, to turn the best-selling novel The Secret Life of Bees into a hit movie that earned itself the NAACP Image Award for Outstanding Motion Picture earlier this year. Here, she shares her thoughts about her new show, HawthoRNe, where she’ll be playing the title character, a recently-widowed, single-mom who works as the compassionate chief nurse at mythical Richmond Trinity Hospital. This new dramatic series premieres on TNT on Tuesday, June 16 at 9:00 PM (ET/PT).

KW: Hi, Jada. Thanks for the time.

KW: Before we start, I hope you could answer this trivia question. I recently interviewed Rashida Jones and I was asking her about the opening sequence of every episode of The Fresh Prince of Bel-Air. Towards the end of the theme song, when Will gets out of the taxi, I always assumed that the cabdriver was Quincy Jones. Looks just like him. When I asked Rashida, she said had never heard that rumor before, and that she didn’t know for sure, but she didn’t think it was her father. Can you settle the mystery once and for all and tell us whether that’s Quincy behind the wheel? 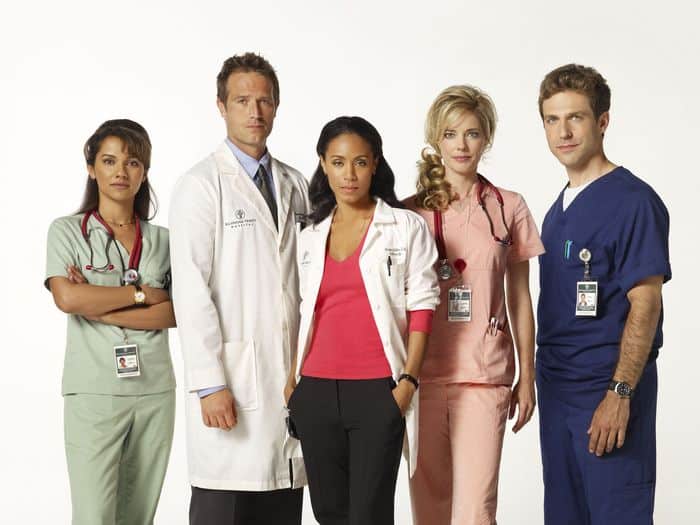 KW: Thanks for clearing that up. My favorite film of yours is Bamboozled. Which is your favorite?

KW: What interested you in returning to TV to do HawthoRNe?

JPS: I was not looking to do television at all. I got a phone call from my manager, Miguel Melendez, and he says, “Listen, I really – I want you to read this script. I would never send this to you if I didn’t think it was fantastic.” I read it and then I let my husband read it. I was really interested in the project, and after a bit of back-and-forth I decided, you know what, I’m just going to go for it. I had vowed I’d never television again. But I decided to take it because I needed something different. 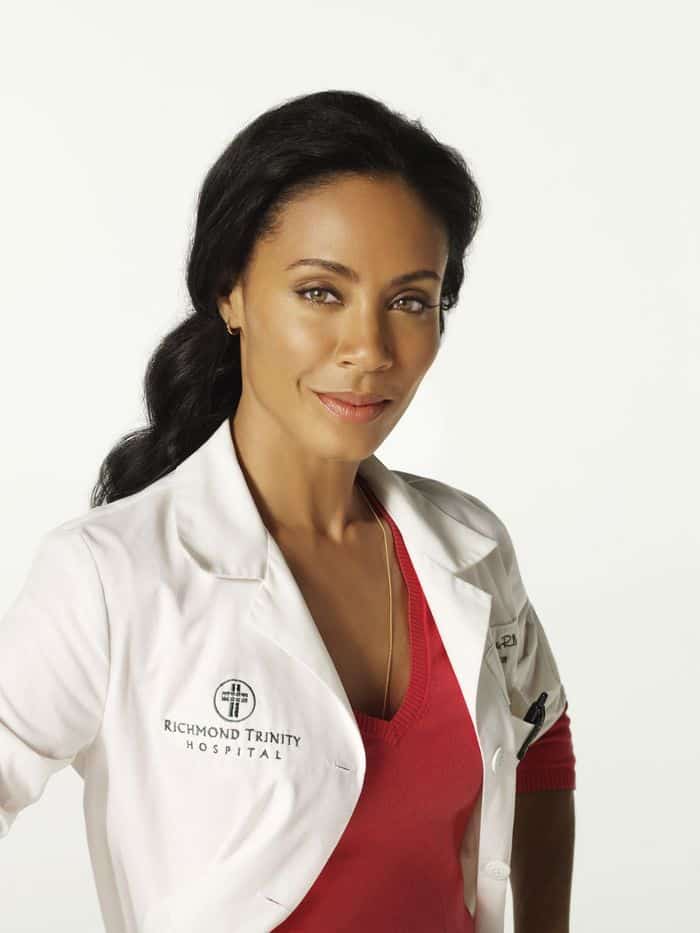 KW: Was the fact that you’d be going to TNT important?

JPS: Well, I would say going to TNT was what closed the deal for me. Once I met everybody there, I really loved the group at TNT, and I liked what their expectations were for the show. So, I just felt this really could be a beautiful marriage.

KW: Since you started playing a nurse, has your family started expecting you to cure their ailments?

JPS: Well, my mother is a nurse. So she is pretty much the nurse of the family. She has gotten that kind of locked down. So no, I’d have to say my family pretty much knows that in real life any type of physical traumas like cuts and bruises and anything like that, you’ve got to call – that you’ve got to call gammy for that.

KW: Does it mean anything to you that other than Jill Scott, you’re now the only black female lead on a drama on television right now?

JPS: I hadn’t really thought about that. I’m really grateful for the opportunity- but I just want to make a great show. I’m hoping that people can just see a great show, whether it’s an African-American, an Asian, or a Native American that’s standing at the forefront. History-wise, there was probably a point in time when I wouldn’t have had this opportunity. So, to have this opportunity is a big deal for me. I’m very grateful for it.

KW: Are there any plans for any of your children to appear on the series?

KW: Judging by your mother-in-law on the show, Joanna Cassidy, I assume that your late husband was white or at least half-white. Will your daughter’s character being mixed be explored at all on the show?

JPS: There definitely probably will be some exploring of it later on in the season.

KW: Given Will’s success with the Fresh Prince, has he given you any tips on doing a series?

JPS: Sure, my husband has a plethora of information to share. He is here with me, and he has really offered me an extraordinary amount of help on this particular project. I’m grateful for him.

KW: How have you been handling all the blood in the medical scenes?

JPS: There won’t be much gore on the show. There was one scene where somebody had an open gash on their leg and that kind of caught me off-guard. I’m really not one for a lot of physical gore like that, which is why my mother is very surprised about that I’m playing nurse. But on this show, we really are dealing more with how people are being affected by their ailment s versus focusing on the ailments themselves.

KW: Diahann Carroll, as Julia, played the first black nurse in a title role on TV back in the Sixties. Do you feel any type of connection to that history?

Jada Pinkett-Smith: I do, I do feel connection to that history, absolutely – because she’s the only prominent black female nurse that I can think of who’s been on television. I feel both for that character and for Diahann Carroll as an actress, and I appreciate the road that she and paved for me to even have the possibility of being an actress in Hollywood.

KW: I know your mother’s a nurse. What does your dad do for a living?

JPS: My father has been in construction for pretty much all his working years.

KW: How old were you when you knew you wanted to be an actress?

JPS: I was about three when I wanted to be an actress. I knew that I would definitely be participating in Hollywood in some way. I didn’t know the amount of success I would enjoy, but I knew I would be here at some capacity.

KW: Tell me a little about your friendship with Tupac while in performing arts school.

JPS: Tupac and I were just close friends because we had such an insatiable drive and passion for acting and entertainment. It was inevitable as far as we were both concerned.

KW: Thanks again for the interview, Jada, and best of luck to you with the new show.