The daughter of actress Ingrid Bergman and director Roberto Rossellini, supermodel/actress/director/singer/author/conservationist/feminist Isabella Rossellini grew up in Paris and Rome. At the age of 19, she moved to New York, where she became a translator and later a reporter for RAI-Italian Television. Her popular segments led to appearances as the New York correspondent for the weekly Italian comedy show THE OTHER SUNDAY, with Roberto Benigni.

At the relatively advanced age of 28, Isabella began a modeling career when she was photographed by Bruce Weber for British Vogue and by Bill King for American Vogue. She has since worked with the industry’s most distinguished photographers – from Richard Avedon to Steven Meisel, from Helmut Newton to Peter Lindbergh, from Norman Parkinson to Eve Arnold. And she has appeared on the cover of such magazines as Vogue, Elle, Marie Claire, Bazaar and Vanity Fair. An exhibition of photographs of Isabella, Portrait of a Woman, was held in March 1988 at the Museum of Modern Art of the city of Paris.

Isabella made her cinematic debut in 1979 in Paolo and Vittorio Taviani’s IL PRATO (THE MEADOW). Her American film debut was opposite Mikhail Baryshnikov and Gregory Hines in Taylor Hackford’s WHITE NIGHTS. In 1986, she starred opposite Dennis Hopper as Dorothy Vallens, the tortured lounge singer, in David Lynch’s haunting and controversial BLUE VELVET.

Her other film credits include, THE ACCIDENTAL HUSBAND, MY DAD IS 100 YEARS OLD, THE ARCHITECT, THE FEAST OF THE GOAT, HAVE YOU HEARD, THE SADDES MUSIC IN THE WROLD, ROGER DOGER, COUSINS, ZELLY AND ME, WILD AT HEART, DEATH BECOMES HER, FEARLESS, WYATT EARP, BIG NIGHT, THE IMPOSTORS and THE FUNERAL. Her portrait of the Jewish Hassidic mother in LEFT LUGGAGE directed by Jeroen Krabbe, won a special award at the Berlin Film Festival in 1998.

Isabella’s modeling and acting career also led her into the world of cosmetics. Beginning in 1982, she was the exclusive spokesperson for the international cosmetics brand Lancome for 14 years. In 1990, Lancome launched the very successful fragrance Tresor, which was her first involvement with product development. In 1995, she began collaboration with Lancaster Group to develop her own brand of cosmetics, Manifesto, which launched internationally in May 1999.

Isabella’s fictional memoir “Some of Me” was published in 1997, and her photographic book, “Looking at Me,” is currently in stores. She also wrote a book about her father entitled IN THE NAME OF THE FATHER, THE DAUGHTER AND THE HOLY SPIRITS: REMEMBERING ROBERTO ROSSELLINI.

Isabella is very involved in Wildlife Conservation. The Disney Conservation Fund just awarded her for her commitment to this cause by giving her $100,000 to donate to a conservation organization of her choice. She is also a volunteer for the Guide Dog Foundation and trains puppies for their program.

With day-glo costumes, paper puppets, and text by legendary French screenwriter Jean-Claude Carri’re, she acts out a panoply of reproductive oddities: the praying mantis that consumes its partner while copulating; the male bee who loses his penis in the act; and the shrimp, whose foreplay involves it shimmying seductively out of its shell. The play, which is part nature documentary and part DIY cartoon, is scheduled to continue its run into the spring of 2015.

Isabella Rossellini: Thank you for doing the interview, Kam. How are you?

KW: I’m great, thanks. In preparation for this interview, I did a little research, and I read that interview you recently did with a jaw-droppingly rude reporter from Vanity Fair. 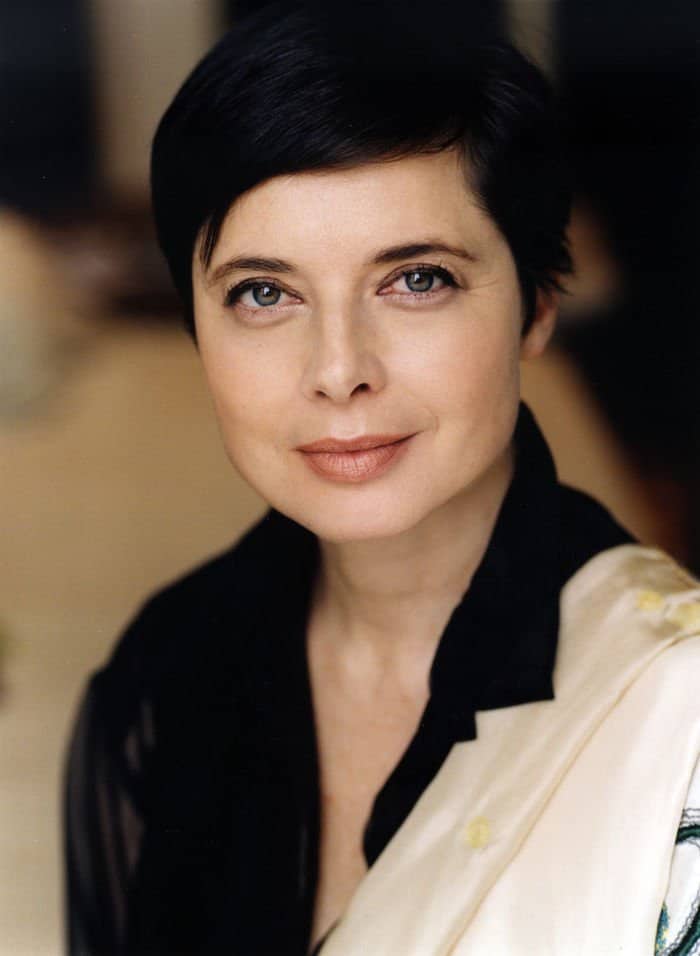 KW: Bobby Shenker says: I love you! Will you marry me?

IR: Of course I will, Bobby! I’m single, so there’s absolutely the possibility.

KW: Here’s another guy who’s gushing. Gil Cretney says: Kam, please tell Isabella from me… she is a goddess!

IR: [Laughs again] That’s very wonderful to hear. Sometimes I get called beautiful or kind. But a goddess has it all, supernatural powers. Thanks, Gil!

KW: No it’s also very positive. Larry Greenberg simply says: You are so wonderful! I’m too smitten to come up with a worthy question.

IR: That’s very nice, Larry. And it’s very kind of you to read me all these comments, Kam.

IR: No I haven’t. I’m not familiar with him. But I’ll write down his name and look it up.

IR: No, I don’t see anything new. Maybe it’s different in Los Angeles where they have more of a problem with paparazzi. That part of being a celebrity is not so pleasant. It all started in Rome long ago, you know, before spreading to L.A. and elsewhere.

KW: That makes sense, since paparazzi is an Italian word.

IR: It began in Italy with amateur photographers stalking celebrities. They would be so persistent trying to provoke something, and if you lost your patience, then they could get the sort of sensational photo they were after. It is more widespread in the U.S. in recent years than it used to be, especially in Los Angeles, not so much in New York yet.

IR: The reason why we used paper costumes is because we had a very limited budget, and it seemed to be the cheapest way to go. So, we managed to make something stylish out of our weakness by creating all of the costumes out of paper.

KW: Irene has a follow-up: What led you to develop this one-woman play?

IR: The success of my short films, and the encouragement of friends. Also, this wonderful, Oscar-winning writer, Jean-Claude Carriere, agreeing to help me write the monologues was very tempting. That’s what did it.

KW: Irene has one more: Which of your many roles as a supermodel/actress/director/singer/author/conservationist/feminist do you enjoy the most and which do you think expresses the essence of who you are?

IR: I sort of divide them in my head. Some of those roles are professional, like modeling or acting or writing. But being a feminist is not a job. What I think has been wonderful about my life is that it has been diverse, and that I’ve been able to do so many different things. I was able to evolve from modeling into acting. And then when acting opportunities became limited because of my age, I was able to become a writer and director and author. So, I am grateful to myself that I didn’t just sit around and become nostalgic about the past that has been and canA’t come back, but that I instead decided to move on.

KW: But if you could only be remembered for one thing, what would that be for?

IR: As the mother of my children.

KW: Cynthia Groya says: I am a huge admirer of yours! All the unexpected and courageous moves you have made in your life. What was it like working with Dennis Hopper and David Lynch on Blue Velvet?

IR: Well, it was actually, a very, very nice set. We all became very good friends, and remained close all our lives. The film is very scary, very serious but it was very pleasant on the set because of our friendship. We all met filming, and hit it off very well. And it was also one of the most important films I have done in my career.

KW: Cynthia also asks: What was the best thing about growing up Ingrid Bergman’s daughter?

IR: Well, she was really “mom,” whether or not she was Ingrid Bergman the actress. She was a very warm, charming, funny, tender, entertaining and playful mother. That was the best. The fact that she was famous came along with those qualities was a bonus, although we might have liked for her to be less famous so sheA’d stay home more.

KW: Filmmaker Ray Hirschman says: Isabella, you are so multi-talented. But if you had to follow only one artistic road, which would you choose?

IR: I would probably pursue the one I’m doing now, because thatA’s the one you can control the most, writing, directing and performing your own pieces. It’s the best, because I can create jobs for myself.

KW: Yale grad Tommy Russell would like to ask: How much time do you spend in the United States?

KW: Tommy also says: I hope she gets a kick out of this question. Can I have your love life? Tell her I’d take the ups and the downs.

IR: [LOL] I wonder why. Tommy must like some of the husbands and boyfriends he knows I’ve had. [Laughs some more]

KW: Kate Newell says: I loved you in your role on 30 Rock! What was the best piece of advice your mother gave you?

IR: My mom was very down to earth, very concrete, and I think her biggest lesson was setting that as an example, rather than giving me a piece of advice.

KW: Editor/Legist Patricia Turnier asks: What advice do you have for aspiring female filmmakers, given that there is still a scarcity of women in that field?

IR: Keep doing it. Persevere! It’s hard to make a living in any of the arts. When most people think of artists, they think of the stars and the celebrities. But that’s such a tiny minority of the elites who are able to make those millions of dollars. The reality is that it’s very hard for the rest to make a living as an artist. So, you really have to persevere and understand that achieving the sort of success where you’re making the big money is like winning the lottery.

KW: Patricia also asks: Is there a biography of an icon you dream of adapting into a movie?

IR: No, I have never thought about that.

KW: Marcia Evans says: As a woman of color, I appreciated your conscious decision to not continue your Lancome campaign contract. Was that due to a personal stance on not supporting a beauty campaign whose message about beauty by societal standards can only be reflected by youthful skin? I wasn’t surprised to learn that you did not want to represent that message/mentality that beauty only exists with youth. Bravo! I would like to see among the faces of a campaign championing the beauty of mature women of all ethnicities.

IR: You’re right, Marcia. There’s still this problem that hasnA’t been resolved. We are working towards that goal of having women of all ages and ethnicities well-represented in the industry.