Born on in Detroit on Sept 28, 1976, Gregory Kieth caught the acting bug as a child while entertaining at family gatherings, doing impersonations and storytelling. At the age of five, his family moved to California, where his interest in athletics and modeling eventually took a backseat to his true desire, acting.

Parents never forget their children’s first word. Well, when Greg began to speak, his folks say he didn’t have just one word to say, but a whole rap song and beat, snapping his fingers and the whole nine yards. And while he grew up in the ‘hood where fun and games were nonexistent, he didn’t let his dire circumstances destroy his creative impulse.

Instead, he used his environment as a source of inspiration. As long as he can remember, music has been second nature with Greg. He began composing songs at 11, however, his first priority was still sports at that point. Realizing where his heart was, he gave up playing ball and headed to Hollywood. Not long after, Greg was recording his first demo album and testing his material at the local hot spots. After overwhelmingly positive feedback, he became even more ambitious to begin on his next album. 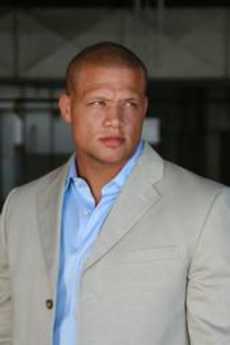 Eventually, he found his niche as an actor, landing bit parts in various television series, including Suddenly Susan and The Jamie Foxx Show. Although his heart is in performing, he also works in music production and dabbles in screenwriting. Plus, he strives to maintain a healthy mind and body through a strict workout regimen while living life to its fullest.

You can hear Gregory’s music on many movie soundtracks as well as television shows, including Noah’s Arc, a gay-themed, African-American-oriented TV series, where he is a member of the ensemble in the role of Trey, a gay doctor. He’s currently working on Johnny 99, an action film in which heaven and hell are at war on Earth; and he’s recently entered talks with Tommy Boy Records about a recording contract.

Here, he talks about his career, including his work on Noah’s Arc.

KW: Thanks for the time, Greg.

KW: You were born in Detroit, but raised in L.A. Do you still have any childhood memories of Motown?

GK: TOO MANY TO MENTION, BUT ONE THAT COMES TO MIND IS WHEN MY BROTHER AND I WERE PLAYING UPSTAIRS IN OUR HOUSE WHEN MY DAD WOULD CALL US DOWN TO LISTEN TO THE LATEST JAM ON THE RADIO.

KW: How old were you when you knew you wanted to be an entertainer?

GK: I WAS AROUND FIVE

KW: Did you perform in many school productions?

GK: NO, I WAS SHY IN MY SCHOOL BUT STARTED TO COME AROUND IN JUNIOR HIGH. THAT’S WHEN THE TALENT SHOWS AND ACTING STARTED TO TAKE ROOT.

KW: Did you study acting and singing formally in school?

KW: Which do you prefer?

GK: BOTH THE SAME.

KW: What was your first professional acting gig?

GK: A COMMERCIAL FOR GATORADE.

KW: How did you land the role of Trey on Noah’s Arc?

GK: I ACTUALLY AUDITIONED FOR [NOAH’S ARC PRODUCER] PATRICK POLK FOR ANOTHER FILM AND HE THOUGHT I WOULD BE PERFECT FOR THE ROLE OF TREY. WE HAD LUNCH AND HE TALKED TO ME ABOUT THE SCRIPT, THE NEXT THING I KNEW WE WERE IN VANCOUVER SHOOTING SEASON 2

GK: COMPASSIONATE, STERN, AND LOVING WITH A TWIST OF NERD.

KW: Do they have anything interesting planned for your character this season?

GK: FROM WHAT I HEAR, TREY AND ALEX ARE MAKING SOME MAJOR CHANGES IN THERE LIVES

KW: How do you get along with the other actors in the ensemble?

GK: (LOL) PROBABLY THE FUNNIEST BUNCH OF GUYS I’VE BEEN AROUND IN A LONG TIME.

KW: Do you see the show as having social significance beyond its entertainment value?

GK: DEFINITELY. I THINK THE SHOW HAS DONE SO MUCH IN RESPECT TO THE GAY AND LESBIAN COMMUNITY, NOT TO MENTION THE GAY AFRICAN-AMERICAN MALE

KW: Are you worried that playing a gay character on TV might leave you typecast in the way that Jaleel White had a hard time shaking the nerd image after playing Urkel?

GK: THE SHOW HAD MEANING AND THE STORY WAS ONE THAT I THOUGHT WAS AS INTERESTING AS ANY I HAD SEEN ON PRIME TIME TELEVISION. SO, NOT REALLY. NO.

KW: Do think that being a handsome, light-skinned brother with a buff body is a blessing or a curse in Hollywood?

GK: A LITTLE BIT OF BOTH. BUT YOU LEARN TO GAIN AND LOSE WEIGHT WHEN YOU HAVE TOO

KW: What type of regimen do you have to maintain to keep in that shape?

KW: What do you do in your spare time?

GK: WRITE MUSIC AND PRODUCE INDY FILMS WITH MY BROTHER AND BEST FRIEND.

KW: I listened to some samples from your CD (http://profile.myspace.com/index.cfm?fuseaction=user.viewprofile&friendID=131435865), and enjoyed the tunes I heard, especially Don’t Play. How would characterize your singing style?

KW: Who are your musical influences?

KW: What sort of roles are you looking for?

GK: ANYTHING THAT MAKES ME THINK, AND/OR SOMETHING THAT PUSHES ME TO EXPAND MY CRAFT

KW: What actors and actresses would you like to work with?

KW: What area of Los Angeles were you raised in as a child?

GK: I GUESS MOST PARTS. WE MOVED EVERY YEAR SO.

KW:Where in the city do you live now?

GK: OUTSIDE OF L.A., ACTUALLY

GK: SMILE, WHEN YOU THINK THINGS JUST CAN’T GET ANY WORSE.

KW:Thanks for the time Gregory, and best of luck.