Columbus Keith Short Jr. was born on September 19, 1982 in Kansas City, Missouri, although his family moved to L.A when he was just 5. Soon thereafter, he started studying acting at a youth theater and began performing before he was a teenager. After graduating from Orange County High School of the Arts, he joined the traveling Broadway production of Stomp. He also appeared on stage in Grease, Bus Stop, Once upon A Mattress, Guys and Dolls and The Wizard of Oz.

During a lull when he couldn’t find any theatrical work, he decided to try his hand at dancing and fairly quickly met with success. However, he became the subject of speculation in the tabloids when he was rumored to be conducting a clandestine affair with Britney Spears while choreographing her In the Zone concert tour. 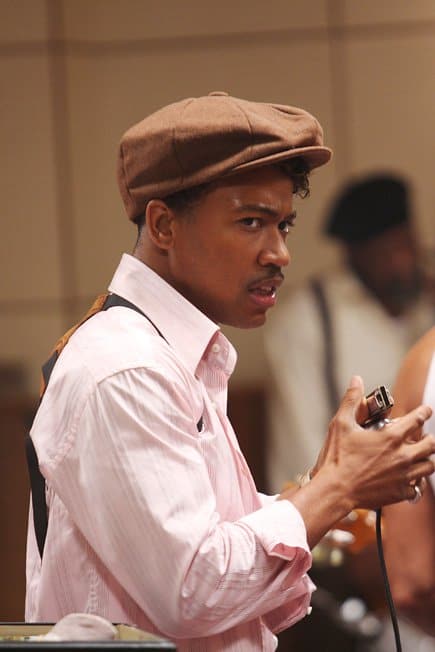 Last year, he landed a lead role in Stomp the Yard, a hit flick which was #1 at the box office. Since he’s appeared in This Christmas and Quarantine, and is set to star in 2009 opposite Kate Beckinsale in Whiteout, and with Laurence Fishburne and Matt Dillon in Armored.

KW: Hey, Columbus, thanks for another interview. Of course I have to start you off with the Columbus Short question: Are you happy?

CS: Yeah. What I did in this film and what I’m doing in my career are bringing me immense joy now. I’m getting to do things that make me happy.

CS: Getting the opportunity to challenge Hollywood’s perception of me.

KW: Did you enjoy working with such a talented ensemble?

CS: Yeah, we had an amazing cast.

KW: How did you prepare for your role as Little Walter? Was there any video of him available?

CS: No, there was no footage. I relied on pictures, biographical information, and the music. The music was huge. I also tried to learn the harmonica and to understand where he came from, and to find the Cajun dialect he spoke in, in order to embody him. I did all of that, so it was a lot of work.

KW: And how about the womanizing aspect of his personality?

CS: That was fun to delve into, but that was nothing special, since it wasn’t a trait unique to Little Walter. That’s what a lot of bluesmen were doing at that time. They really lived by the music, and with the music they created sex, and with the sex they created babies. And drugs were added to the mix as another element of this lifestyle.

KW: In making this movie, did you reflect upon the exploitation of black artists, historically?

CS: Yeah, it was amazing to see, especially when you think that black people at that time were basically about 30 seconds past slavery. Certainly Muddy [Waters] was. And then they became gods in their world because of the music they created. Yet, you see the limitations placed upon them by racism. Not only that, it’s shocking to see how these white promoters were taking the music that these talented African-Americans had created and simply giving it to their own people, and letting their own be the beacons of light. That was just unbelievable to see. That’s why I’m glad this story is being told. It’s telling the truth about where Rock & Roll originated, on the front porches of Mississippi. Raw music with guitars, folks singing about what they were living, and living what they were singing. These guys weren’t putting on airs. They were sweating in the fields living the blues. That makes them very interesting.

CS: A lot of blues, actually. I think popular music is in a horrible state. So, I find it inspiring to go back. I’ve always been kind of a jazz head, but the blues really speaks to me right now. Little Walter and Muddy Waters were incredible. And Bo Diddley was doing some great stuff, too.

KW: I know you have Whiteout coming out in 2009, which is set in Antarctica during the short days with very long nights of winter. Was it cold and dark on location?

CS: Oh yeah, it was. We shot it in Winnipeg, Canada, but it still felt like we were in the Antarctic. Man, it was crazy.

KW: Your other film coming out next year is Armored. What can you tell me about that?

CS: I’m excited about Armored, because it’s the first movie where I’ve been able to be the lead, and I’m in good company with Laurence Fishburne, Matt Dillon and Jean Reno. It’s an action thriller, which puts me in that hero light and gives me a chance to show that I can not only do a Cadillac Records, but a big commercial movie as well. That’s how I’ve been trying to shape my career.

KW: Earlier this year you were in Quarantine, a horror film. I didn’t see it. In most horror films, the black guy dies first. Were you the first character to go?

CS: No way. Times are changing. Look at Obama.

KW: How did you feel about Obama winning the election?

CS: It was emotional to see what the picture of the President-elect, the First Lady, and the First Family look like. The man who’s running our nation looks like me. It’s incredible. I never thought I’d see it, nor did my grandmother or great-grandmother. So, it was a very emotional moment, because even though we’re not in the Civil Rights era, it’s still not easy being a black man. And I hope that times will change in this business to the point where Don Cheadle can play a lead in movies without all the preconceived notions about Middle America not being ready for that. There are as many quality African-American actors and actresses as Caucasians, but it seems that they get a lot more opportunities. For instance, we supposedly can’t do period pieces, because we were slaves back in the day. Well, Obama’s win is changing the game, and Denzel or Laurence Fishburne ought to be able to play the president authentically.

KW: I heard that you’re now romantically-linked to Cherish Chiurme. Is that true?

KW: Apparently, she’s a writer from London. I guess you can’t always go by Wikipedia. On your page there it says the two of you are dating.

CS: Never heard of her.

KW: You better have your Wikipedia page edited. She’s probably trying to get famous by spreading this rumor herself.

KW: You might want to nip that in the bud. Have you heard from Britney Spears lately?

KW: Is there a question no one’s asking you, that you wish someone would?

CS: I think the question at hand is still, are you happy? No one has asked me that since you did last year. I think it’s one of the most interesting questions.

KW: I got this one from Tasha Smith question: Are you ever afraid?

CS: That’s a good one, too. I think I am. I’m afraid of what happens if this career doesn’t pan out, because I have so much invested in it that I can’t turn back now. How will I provide for my family? I get worried about that in these tough economic times. I never want to have to take certain roles, because I want to maintain a certain level of artistic credibility. But sometimes you’re forced to do things for the money. I hope I can maintain that level without ever having to compromise my principles, but I get afraid of that.

KW: This comes from bookworm Troy Johnson: What was the last book you read?

CS: Lost Boy by Greg Laurie. It’s an autobiography by a guy who overcame an awful childhood in which he was abused and abandoned by his alcoholic mother.

KW: The “Realtor to the Stars” Jimmy Bayan asks: Where in L.A. do you live?

KW: Thanks again Columbus, especially for giving me the Columbus Short question.