Q. What is Theosophy?

Q. What does the Theosophy Company do?

A. The Theosophy Company is the legal arm of The United Lodge of Theosophist (U.L.T.) and only concerns itself with maintaining the housing and printing facilities of U.L.T. It has no influence on the operational activities of U.L.T., such as the organization and content of its study classes. 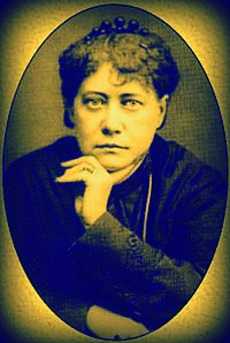 A. Theosophy is not a religion in the conventional sense of the word, as it does not accept an anthropomorphic god, it is religious in the literal sense of the word “religare,” “to bind or unite” all of life together. It’s main concern is to promote brotherhood as a fact in nature.

Q. It seems that Theosophy existed long before M. Blavatsky, but it seems that you place most emphasis on her teachings. Why is this?

A. Students of Theosophy regard M. Blavatsky as the most recent and modern representative of that Divine Wisdom and therefore aim to promulgate her writings and teachings. These teachings contain the accumulated wisdom of the ages (the inheritance of humanity as a whole) found among all the nations in the world. Traditional religions and philosophies only represent the local and exoteric interpretations of this divine wisdom while they lay claim to revelation and personal leadership. 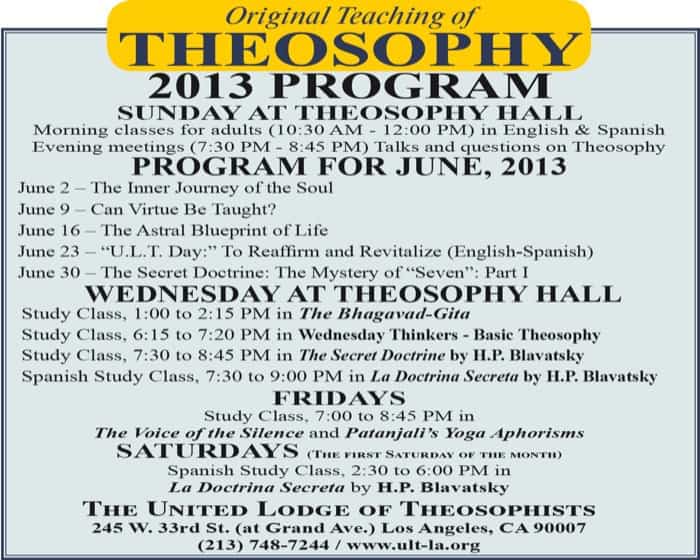 Q. How does Mr. Olcott’s teachings fit in to what you study, or that of earlier Theosophical writers if at all?

A. Mr. Olcott was one of the founding members (together with M. Blavatsky and Mr. W.Q. Judge among others) and president for life of the Theosophical Society founded in N.Y in 1875 and was mainly concerned with administrative functions within the Society. Although Mr. Olcott has written on his own account and has done marvelous work in the promulgation of Buddhism in the East, his writings are not considered to be representative of the original universal teachings of Theosophy. M. Blavatsky was the corresponding secretary responsible for the promulgation of the teachings together with her right hand Mr. W.Q. Judge in

Q. How can studying of M. Blavatsky help people?

A. It is not the study of M. Blavatsky that will help people but rather the teachings of the philosophy of Theosophy promulgated, not invented, by M. Blavatsky. The teachings are helpful in that they provide a universal basis to learn to understand the common origin, unity, structure and purpose of Life. To learn to understand the multiple facets (physical, psychological and mental) of man as a spiritual being and his relationship to that Life and the cosmos. The proper understanding of teachings such as reincarnation, karma and the law of cycles provide a sound basis to walk a responsible path in life.

Q. What is the most important work of Theosophy, and why?

A. To promote a spirit and nucleus of universal brotherhood among humanity without distinction of race, creed, sex, condition or organization. To show the importance of the comparative study of religion, science and philosophy that will indicate a common origin and purpose of man, and to investigate the unexplained laws of nature and the latent psychic and spiritual powers in man.

Q. Some believe that Theosophy is a cult. What is your response to that?

A. As Theosophy claims to be the universal root from which every religion and philosophy has sprung, it endeavors to show that truth is not the sole property of any cult nor creed. As such the true theosophist belongs to no cult or creed and yet belongs to each and all in so far as that truth is represented within their teachings.

Q. Do theosophists practice what is considered magic or witchcraft? How so?

A. As true magic is the expression of the imaginative powers residing in every man or woman, Theosophy does not promulgate any rituals nor ceremonial magic that is detrimental to the health of the individual or society as a whole.

Q. Can one have another religion such as a Christian, Jew, Buddhist, etc., and also be a Theosophist? Why or why not?

A. As universal truth can be found in the essence of every religion or philosophy, each student of Theosophy is free to adhere to the religion of his own choosing, and by investigating his own belief system can come to a realization of this truth within himself.

Q. What is Theosophy’s view on ‘an eye for an eye?’ In other words, do you feel that we should attack others back when they deliberately attack us? or not? Why or why not and what doctrine of Theosophy discusses this?

A. Theosophy states that the universe is ruled by the impersonal Law of Karma or the law of cause and effect which is the very essence of man’s being. Therefore no human being has the right to apply this law in a self-serving manner but has to let this universal law run its impersonal course. The teaching of “an eye for an eye” is the anthropomorphic interpretation of this universal Law of Karma. The Law of Karma is the very expression of the principle of universal compassion and as such each individual expressing its own causes reaps the just rewards as effects for its own actions. It brings the responsibility for our actions back to the individual itself and therefore is not dependent on any external or man made agent.

Q. What is the Theosophy Company view concerning life after death? Is this view in alignment with earlier teachings of theosophy?

A. As said before, the Theosophy Company is only the legal representative of U.L.T. The view of Theosophy concerning life after death is that death and birth are the periodical ebb and flow of universal life. Life can exist in a variety of states of consciousness. Embodied consciousness during life on earth is only a limited phase of our existence. As such there are conditions of conscious existence after we pass away with which science in general is unacquainted. The conditions of this existence after death are dependent upon the thoughts and feelings generated during life, again an expression of cause and effect. There are mainly two primary states after death, one dealing with the decay of the psychic constituents of the deceased and the the other with the spiritual essence of man’s being. When the energies in both of these conditions are exhausted, man will return back to earth to continue his journey.