Award winning fine artist Guadulesa has become known for abstract or loosely figurative works of art, which reflect spontaneity, strong rhythm, texture and color blends. The visual artist is a Boston-native and former resident of the Piano Factory. After studying, she began her art career in Los Angeles, California, where she began to exhibit her work and painted sets for the theatre, television and film industry. Exhibitions at Ligoa Duncan Gallery in New York City led to her work being sent to Paris in 1981, where she won Le Prix de Peinture du Centenaire de Raymond Duncan at L’Academie des Duncan, among more.

The Hollywood Sentinel- Bruce Edwin: For our readers who are not familar with you, please tell us about you and what you do? 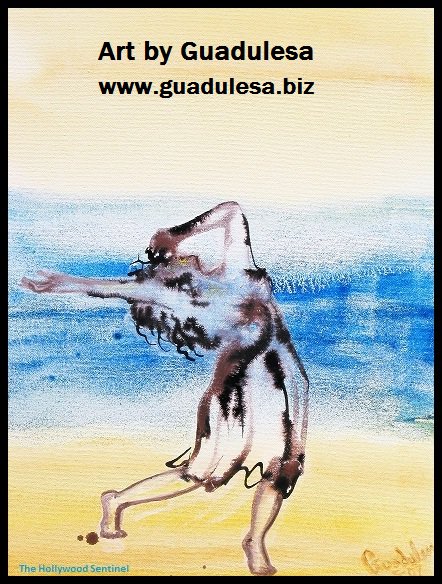 Guadulesa: I am a visual artist. I have become known for abstract or loosely figurative works of art, which reflect spontaneity, strong rhythm, texture and color blends.

Hollywood Sentinel: When did you start doing this, and what training did you have?

Guadulesa: I began my studies in Boston, where I grew up. When I came to Los Angeles in the ’70’s, I continued my studies at Pasadena City College, from which I obtained an Associate of Arts Degree in Studio Arts. In 1979, Josine Ianco-Starrels, who was the Director of the Municipal Arts Gallery at Barnsdall Park, became interested in my work and arranged an introduction to Kanemitsu, a professor at Otis Art Institute. I had already seen his work, which I admired greatly, so I leaped at the chance.

Hollywood Sentinel: How did you know you wanted to be an artist and why?

Guadulesa: Art had been one of my favorite childhood pastimes, but academic studies took over, as I grew older. I pushed art into the background for about ten years. When I began to take art classes at PCC, I received such favorable feedback, I decided to take my talents seriously. I have not looked back.

Hollywood Sentinel: What is your advice to aspiring artists?

I would advise them to see as much work as they can – visit galleries and museums, look at art magazines, talk to artists. Try different styles.

Hollywood Sentinel: Many kids get told that doing art is a nice hobby, but not a realistic career. What would you say to them when they get told this?

Guadulesa: I have to admit that finding a career in the arts can be very challenging. One has to be prepared to take the long road. Success rarely happens overnight, because there are so many variables. Even if it does seem to strike overnight, it does not always last. Success does not entirely depend on talent, but tenacity, dedication, single-mindedness. There are always people or circumstances that can deter you, but if you are truly inspired as an artist, nothing else quite satisfies.

Hollywood Sentinel: Were you supported to pursue art as a child and young adult and if so how or how not?

Marketing, Promotion and The Arts

Guadulesa: My talent was appreciated and supported. However, it did not even occur to me that I could support myself as an artist. When I renewed my interest in art, I began to understand marketing and promotion – and dedication – from my musician friends. I applied those principles to my art life.

Hollywood Sentinel: What are you working on now that readers should know about?

Guadulesa: I just returned from Boston, where I unveiled a new painting, in honor of a dear artist friend who passed away four and a half years ago. I received rave reviews by art critics, collectors and artists alike. We were installed at the gallery for two days, where I painted live with musician friends – two of whom I painted with regularly when I lived there. We opened each evening to the public.

Hollywood Sentinel: Thank you for your time Guadulesa, it was nice speaking with you!

For more information on Guadulesa, visit her website at:

For commission works or purchases of existing inventory, contact the studio of the artist at the e-mail as follows: