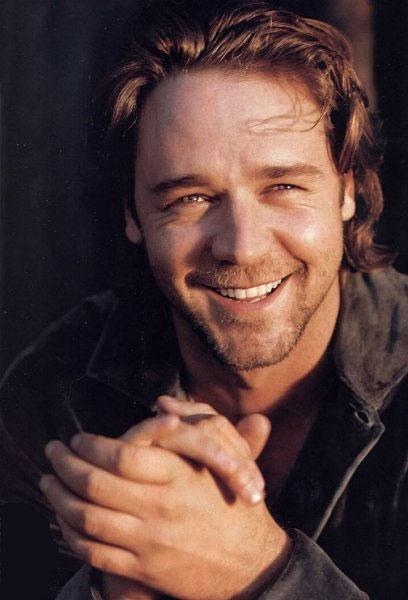 American Gangster, The Russell Crowe Interview: On Jail, Justice And Jive Talk To Babes On The Weight Of A Man.

Russell Crowe may be more into his role as a dad to two rowdy young boys right now than doing his tough guy thing in movies. But that new nurturing side of his complicated personality hasn’t smoothed over those sharp, gritty edges of his on-screen persona, even when playing a dedicated cop in Ridley Scott’s sinister crime thriller, American Gangster.

Crowe was as mellow and laid back as can be for this interview, even when managing to chew gum and balance his gabby three year old son Charlie on his knee at the same time. But even dads know when they’re being upstaged. So after Charlie insisted on telling a bunch of jokes – including the one about making a baby stop running around by breaking its arms and legs – the kid was sent off to play outside in the corridor, so the conversation below could take a somewhat more serious turn.

That strange Oshkosh shirt your son Charlie is running around this hotel wearing today, was that your idea?

Yeah, I can see that!

RC: He likes hats too.

Now about American Gangster, aren’t people going to watch this movie, and maybe think that drugs are cool?

RC: No, no. I think you’re missing the point altogether. But the reality of Frank Lucas’ life, is that a lot of it was glamorous. He ran a club that all the celebrities went to. Like Wilt Chamberlain was his mate, and they used to hang out.

So yeah, it was glamorous. But the bottom line was that Frank Lucas made a living at the expense of other people. So you can have your opinion about this, and see it whichever way you want to see it. But I saw Ridley show very carefully, just the destruction that Frank was bringing about.

Yeah, this man loves his family. But Ridley also shows the destruction, and the tragedy, you know? And he was a smart guy, and a good businessman. He took the attitude about a regular product, and he took it into the dark, murky depths of the heroin business. But he operated it like it was McDonalds!

You know, he sold a high quality product cheaper, and he put it out on the streets at the right time. Like just at the time that the welfare checks were in the mail. So he was a clever businessman.

And what’s your opinion of cops, now that you’ve been on both sides of the law – in handcuffs yourself, and putting them on other people as the real life cop Richie Roberts that you play in this movie?

RC: Well, this guy wasn’t such a good person. He couldn’t keep his pants zippered.

Did he say that to you?

RC: No, what he told me is, ‘I don’t want to be portrayed as a womanizer. But lemme tell you about this one time! I was in the Supreme Court on this case, and I had this stenographer in the second floor broom closet.’

And what did you say?

Did you draw from any experiences in your own life impressing females, to play Richie the womanizer?

RC: I’ve known my wife for a long, long time. And I did so much s*** over that time to try and impress her, I couldn’t even begin to tell you the list. Eventually it must just have been the weight of effort, she finally decided I was worthwhile!

After all you’ve been through in your own life with cops, did playing a cop in American Gangster change your opinion of them?

RC: No, I don’t think so. Nobody wants zealotry in a police force, you know? You do want to know that the guy who’s got that badge, is confident enough to judge a certain level of benign corruption. Like a man steals some food to feed his starving children. You know, okay, I can dig that. It’s cool. Then just walk on.

But there’s a line that you don’t want crossed. And I think the thing that angered Richie so much, was that he believed so heavily in that institution. He believed in America as an institution.

And he was like, this doesn’t satisfy me either. So I’ll do this thing that I know you’re allowed to do in America. I’ll stand here, and I’ll be an advocate for somebody who has no defense. Or who has done something indefensible. And I’ll still stand up for them, and ask questions on his behalf. I’d call him a rock chucker.

RC: Oh, he’s outside the castle throwing rocks and going hey you, the president guy, what the f*** is going on? Pow! And that’s a great patriot, you know?

Do you think your trouble with the law here in the States has had an impact on your public image as a star?

RC: I don’t care. It’s not the thing that I base my life on. It’s not even on the top one hundred of my priority list.

Well, what did you observe in getting to know Richie, that you could use to play him, without being seduced by the version of Richie that he wanted you to portray?

RC: You do get in a situation where a person you’re going to play in a movie, does want to impress upon you the way they’d like to be seen. As in Richie saying to me, don’t make me out to be a womanizer. Even though he had lots and lots of stories about being just that!

And my first time with Richie, he decides he’s going to make a good impression on me. So he borrows a Jaguar from a friend of his! But this is a guy who is on a certain level just dysfunctional, right?

So he borrows this Jaguar, and halfway to Nyack, where I was staying, he gets a flat tire. But he thinks, if I stop to change that flat tire, I’m gonna be late. And that’s gonna give a bad impression. So he drives halfway to Nyack on a flat tire!

And the rim of that tire just got absolutely crapped out. Then the back panel of the car started getting whacked out! Because the rear of the tire is getting more and more uneven. So he gets to Nyack on time. But he’s driving a Jaguar with a flat tire with a busted rim, and now the back panel is hanging off the car!

So this is the real man, right now. And that’s the day he’s trying to make a good impression!

Do you feel like a different person, now that you’re a family man?

RC: My life has changed a lot since I got married. And having two little boys. I’m very blessed. On a daily basis, I get to experience a whole type of joy that I’ve never had before. So it was the right time for me to become a dad.

From where I came from, I’m a workingclass boy, born in New Zealand. And I won an Oscar. And that took a lot of personal fortitude. I had to go from one place to another place on that journey, and nothing was ever guaranteed. It’s all about right place, and the right time.

Part of Richie’s persona is that he’s Jewish. And you wear a Jewish star in the movie. Did that bleed into your own life at all?

RC: Hmm…Well you know (Russell does an accent), I found a nice Israeli family in Nyack that I could have coffee with! On a Sunday. And it was a great part of my life.

Because he wasn’t Italian, and he wasn’t black, you know? He was just in this place by himself, and he needed to make his mark. And do it the way he wanted to do it.

Weren’t you jamming with RZA on the Gangster set?

RC: I don’t know what you mean by jamming, but yeah, we played in the trailer. We played a little guitar and stuff like that, together. But we mainly talked about music, and listened to music. Yeah.

But RZA jams wherever he goes. RZA is always ready for that. And it’s funny you just said that, because it just made me remember what he did one night, at four in the morning. It was really super duper cold. And the four of us were out there doing that surveillance stuff.

And Vasquez sneezed, like some almighty sneeze. And he’s got to like wipe his nose on his clothes, and stuff. And RZA goes into this thing about, there’s a character over there with a faceful of mucous, when he’s going on a chase after Frank Lucas!

RZA quoted one of your lyrics, which seemed so sweet, he sang it when he was just here in the room. It was something about men being a burden to women.

Anyway, RZA said, I want to sing a great Russell Crowe lyric for you.

And she was like, demanding some sort of explanation from him. And the next day he said to me, I told her baby, it’s just the weight of a man! Like he was using my song!

And did it work?