This is a modern day rendition of the story of Pygmalion. The conversion of a common cow into the Pristine princess of Pork!

You see, some people just get too caught up in their own over-bearing obsessions. I’ve always known it was true, I just never was willing to consider that it could apply to a topic dear to both you and I, namely … BACON!

Now there’s this lady, a seemingly nice enough gal, and her name is Bridgette Barnhill of Pigtown, Maryland. It seems Miss Barnhill has a profound and provocative penchant for pork products. She loves a good sausage, that’s for sure, but she’s always fanatically fancied bacon; and really, who can blame her in that?

But where Bridgette Barnhill and sanity suddenly part ways and go in two distinctively different directions is when it comes to her claim to the throne of the Royal Kingdom of Baconia! It seems she is heir apparent to christened crown of this mystically mythical sovereign state, as she is about to be coronated as the kingdoms much beloved and cherished Baroness of the “Houses of Lards” in Pigtown Maryland. 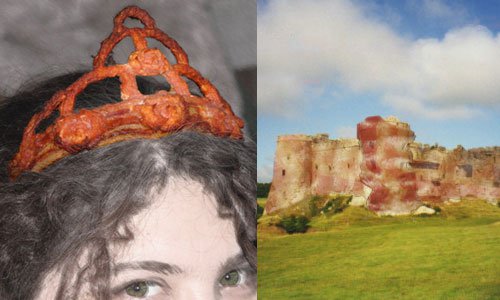 It first I was highly skeptical, as would be anyone hearing of such a tale, but when I started my investigation, it turns out that Pigtown Maryland actually, really does exist. Known sometimes as Washington Village, Pigtown Maryland is a neighborhood in southwest Baltimore, bordered by Martin Luther King Jr. Blvd. on the east, Monroe Street on the west, Russell Street on the south, and the B&O Railroad Museum on the north.

Seems its name came from the thousands of pigs ragged to their death through its narrow streets every year, on their way to be slaughtered in the local meat-packing plants.

According to Miss Barnhill’s story, she is next in line of inheritance to be proudly proclaimed Pigtown’s “Pork Princess,” and so she has been in the market to purchase a pricey, palatial “Princess Pad” produced and put-together primarily of Pigtown’s popular pork product, otherwise known to us as common freaks as Bacon!

Problem is, the home that she was sold, turns out to merely be a “PIG-ment of some clever thief’s imagination. All he did was offer her a list of three homes, with a brief, bullet point outlined description of each home, listing various notable features and benefits in detail, along with an address and a photo of each home.

But as it turns out, the “Bacon Building” that the Baroness bought is brutally bogus!

Now she is taking her Realtor to court, not to here Royal Court mind you, but the legal kind, where she hopes to recoup all of here financial losses on a deal that seems to have come to us right out of a story book or Grim Fairytale.