The Politicizing Of A Once Innocent & Popular Wine!

There once was a very popular organic wine from the country of Chile. It was a deliciously refreshing Syrah with a powerful fruity bouquet and a complex character that most everyone who tried it, loved!

Now that wine has a very serious political problem. Why would politics affect the world of connoisseur wine imbibing? Well, it all comes down to the name. You see this particular Syrah is called Palin.

So if you are drinking it, you are enjoying “Syrah Palin!” Apparently, this is a name that is just too darned close to that of Sarah Palin, the current V.P. Nominee running alongside Republican Presidential Candidate John McCain! 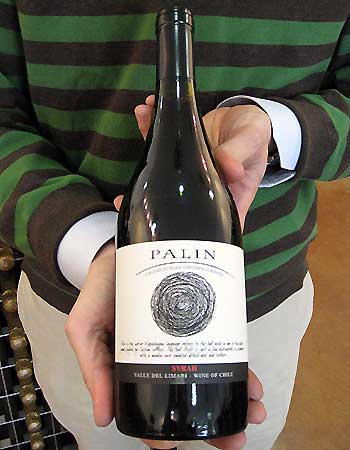 So what can I tell you about this Syrah named “Palin.” Well, Palin Syrah, actually pronounced Pay-LEEN, takes its name from a ball used in a Chilean-style hockey game. Palin Syrah is described as: tastes of “white pepper” and “madrone” – an evergreen found in the Pacific Northwest.

Now former customers have now made a sport of ad-libbing their own descriptions including everything from gunpowder and moose meat to hockey mom and mean spirit, and the list goes on and on.

This was a top selling wine for years but suddenly sales have begun to severely plummet since John McCain named Sarah Palin to be his running mate.

Now the wine has been “unofficially” blacklisted in San Francisco and Berkeley, where people are supposedly liberal, open minded and tolerant. Apparently, however, some there feel a line must be drawn somewhere in the political sand and unfortunately for “Syrah Palin,” it is perceived as being on the wrong side of that line.

Meanwhile, in strongly “Red Sate” territories, such as Houston, Texas, Palin Syrah has been flying off the shelves in this Republican stronghold, where they are already on the verge of running out of the wine, its so amazingly popular.

OK, so now all we need to do is begin looking for an Obama, McCain or a Biden wine, just to be fair.