When you have a Chicago bred chef who’s been trained in New England and French cuisine, and he’s lived in Texas for a while, the result is a rare blend of culinary brilliance. It’s from his profound experiences and background that Chef Brian Olenjack gets the inspiration to create and refine. And its his palate for simple luxury that catapults Olenjack’s signature style for bold, neo-Texas fare. His art ranges from turning simple meals into more flavorful surprises to reinventing traditional dishes with bold ingredients. As a chef, Brian has worked throughout the country learning many aspects of the culinary industry and gaining expertise in a wide variety of cooking styles.

Chef Brian Olenjack created Olenjack’s Grille. He says with one visit you’ll savor an experience that’s unique to the Dallas/Fort Worth culinary scene. It’s a comfortable elegance in the heart of a vibrant entertainment district that is drawing attention for its world-inspired, neo-Texas cuisine. Since its 2007 launch in north Arlington, Olenjack’s signature style, anchored by Chef Brian Olenjack and characterized by entrees such as fried antelope ribs and grilled lamb lollipops, has garnered rave reviews by media and food critics. 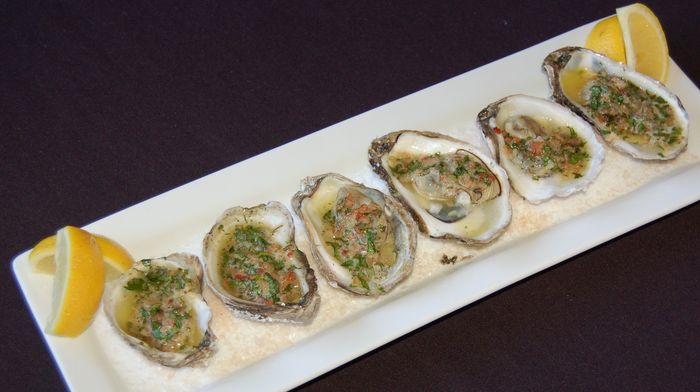 From his world-inspired influence, Olenjack’s customers get original and hearty works, such as Shrimp & Grits, Grilled Rockfish Sandwiches, Port Wine & Tomato Cherry Pie, and Chocolate Covered Cherries Creme Brulee. Olenjack’s has also been praised for masterfully achieving a rare upscale casual dining concept, the only locally owned one of its kind in Arlington. With a rich, yet practical menu that conjures up the finest in local and regional ingredients, Olenjack’s has brought a surge of new life to the Arlington dining scene.

In a heavy skillet cook bacon over moderate heat, stirring occasionally, until golden and add shallot. Cook mixture, stirring, until shallot is softened. Stir in Cognac and cool mixture to room temperature. In a small bowl stir together bacon mixture, butter, cilantro, salt and pepper. Butter may be prepared 3 days ahead formed into a 3-inch-long log, and chilled, wrapped well in plastic wrap.

Loosen each oyster from shell with a small knife if necessary. Return oysters to shells and top with butter. In a small roasting pan spread coarse salt 1/4 inch deep and nestle shells in salt to keep them level. Oysters may be prepared up to this point 8 hours ahead and chilled, covered. Bake oysters in middle of oven until plump and butter is sizzling, about 10 minutes.

Wine Recommendation Fess Parker Chardonnay 2007 Olenjack says “The buttery but smoky flavor of this Chardonnay pairs well with the richness of the oysters,” added Olenjack.

Signing off at Pigging out! Rocco “Boss Hog” Loosbrock