Not to be confused with the Eugene Pottier song existing in more than forty languages, that has been the rallying cry historically of the workingclass everywhere since Karl Marx’s time, the movie The International instead refers to a far different notion about capitalism and banking. Or maybe not.

It’s not a stretch to ponder that at this stage in history, in an exceedingly peculiar and ironic way, capitalists may have taken Karl Marx’s creed more to heart than anyone else, or at least had more means to do so, and gone global in pursuit of an empowerment agenda. Which is where we are right now as the planet is poised on the brink of economic disaster, enough said.

In any case, the unsettling while conventionally convoluted global espionage thriller The International, could not be any closer to a documentary, as it navigates an entanglement of sinister, historically based fictionalized criminal banking schemes worldwide, and sorts out mystery corpses and corporate schemes alike. Directed by German filmmaker Tom Twyker, who reinvigorated the action genre with his stylistically inventive Run Lola Run, The International stars Clive Owen as obsessive workaholic Interpol Agent Salinger. And also possibly Twyker’s latest Run Owen Run screen prey of choice.

As Salinger and Manhattan DA sidekick Whitman (Naomi Watts) burrow into the swanky sewage of global banking conspiracies by capitalist assassins and devious suits in league with diversifying mob racketeers worldwide, police colleagues along with uncooperative investors and politicians turn up dead. Clues are traced to the International Bank Of Business (based on the Bank of Credit And Commerce International (BCCI) scandal) headquartered in a lavish hi-rise fortress in Luxembourg.

Fanatically determined to track down the killers of one of his partners, Salinger instead stumbles upon a global financial network dabbling in arms peddling to developing nations, in addition to the simultaneous sale of missile and anti-missile systems to mutually hostile countries. Not just for the sake of profit, but especially for the more lucrative long term checkmated debt servitude of those gullible purchasers.

But the catch is, when you impoverish your victims, there’s nobody left to pick up the tab. Then additionally apply those same odious principles domestically, and enter the combo foreclosure/economic crisis here right now. 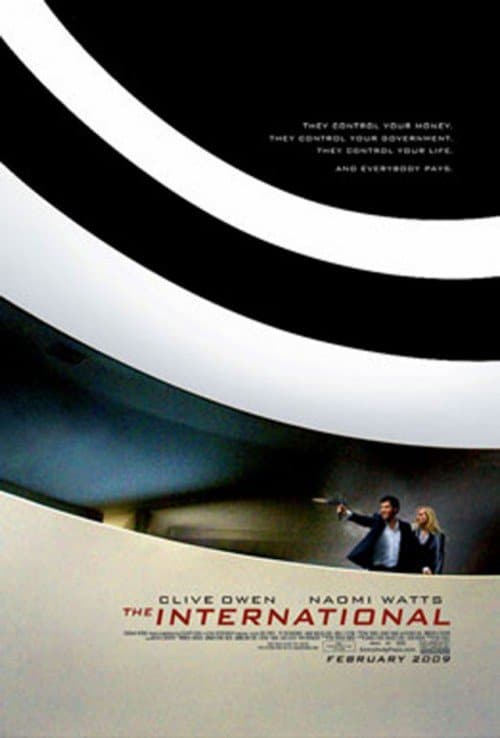 The film effectively spices up these sobering details – and manages to do so without a single one of those hormonally driven secret agents or mandatory sexed up encounters that typically inhabit these espionage thrillers, and without any sense that something essential is missing. While a brilliantly inspired choreographed showdown at a mock Guggenheim Museum maze in NYC between cops and multiple bad guys kicks in, against a wild backdrop of performance art displays interacting with the real world, and dazzling with its shock and awe staging of multi-layered mayhem.

Though the usual chatter in overwrought espionage-ese gets a bit oppressive, Owen’s gritty performance telegraphing manic desperation, flawed human impulses, and a thirst for both redemption and revenge, makes for a stunning journey through the murky, secretive depths of the global economy. The International, a grim cautionary tale for our times, with dashes of dark humor popping up, and leading man libidos in check.