Recently, I met with Doug of www.jerky.com. We had a great conversation and we asked him if he would share with us a little about what he does at www.jerky.com. I started by asking him, what’s the story behind the creation of Jerky.com?

Doug told me that his business can be explained with one question: “If you want to go somewhere to get a wide selection of high quality jerky and meat snacks…where do you go?” Most people have no answer to this question. If they do have an answer, it’s usually Wal-Mart or maybe their favorite convenient store. While the beef jerky found in these places may taste ok, it’s likely mass produced stuff that’s manufactured on another continent or made from “mechanically separated chicken” parts. No thanks!

So…where do you go if you want high-quality, hand-made, gourmet jerky that is made right here in the U.S.? Doug told us that they wanted to create that place. They wanted to develop a site that offered the best selection of jerky products around. After much thought, research and a little creativity, they saw an opportunity to bring the thousands of people who search for jerky products online every month together with the greatest selection of high quality jerky products and meat snacks available anywhere. That was the beginning of Jerky.com. 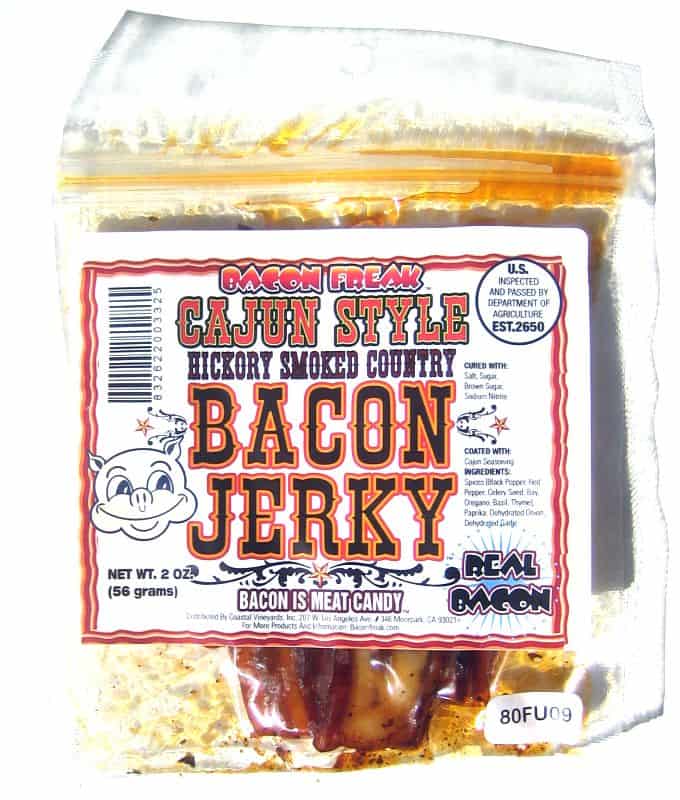 As we are offer our customers Bacon and know that there are Bacon Freaks everywhere we asked Doug to tell us what made him realize that their were just a bunch of jerky freaks out there? Doug told us that he took some ostrich jerky on a road trip with some friends. His intentions were for it to last for most, if not all, of the 10 hour journey. He said that the bag didn’t make it through the first hour of the trip! Jerky is one of those foods that just doesn’t stay around long after its opened. It seems to have some addicting qualities to it. Whatever the reason, people can’t seem to put it down once they start eating it. He then realized that he couldn’t keep a bag of jerky around long enough to close it up and he figured there had to be more people out there like him. As it turned out he was right!

Lastly, we talked about jerky and its history. Doug told me that there is some debate over who was the first to prepare meat like this, but most people believe it was the Native Americans over a thousand years ago. They dehydrated the meat by laying it out under the sun next to a fire. The smoke from the fire would help preserve the meat, while keeping bugs away from it as it dried. This dried meat allowed the Natives to store the food for very long lengths of time and gave them a compact and flavorful source of nutrition to carry with them on their journeys.

Jerky is essentially dehydrated meat. By removing the moisture from a piece of meat, it prevents spoilage, making the shelf life of jerky longer and eliminates the need for refrigeration. There are three basic steps to making jerky: cutting the meat, preparing the meat and dehydrating the meat. When cut, the meat is trimmed of all fat and sliced into thin strips. This allows the meat to dehydrate evenly. Preparing the meat usually consists of soaking the meat in a marinade for flavoring prior to dehydrating.

The dehydration process removes the moisture without cooking the meat. Most gourmet jerky is all trimmed, cut, and hung in a smokehouse by hand. The more care that goes into the trimming process and the longer the marinating and smoking process, the better the product. Unfortunately, over time, many manufacturers of the mass produced products on the market have found ways to shorten these steps in an effort to speed up the processes and make cheaper products. Jerky.com is committed to only feature products that have gone through the time-tested, traditional steps of jerky preparation.

Doug told us that most beef jerky products on the market are junk! Up to 95% of the beef jerky distributed in the U.S. is cheaply produced, imported product that, at best, are repackaged here in the States. If the product doesn’t promote “Made in the U.S.A.” with “100% U.S. Beef,” it probably falls into the “gas station quality” of jerky. This type of product gives beef jerky a bad reputation.

The next time you want to buy a meat snack of any sort, do yourself a favor by passing up the stuff on the shelf at Wal-Mart or in the checkout line at your local gas station and go find some that is made in the U.S. from 100% U.S. meat. Jerky.com has the best quality meat snacks on the market…but even if you don’t buy from Jerky.com, buy U.S. jerky. You won’t be disappointed!

Finally, I asked Doug why is jerky.com the destination place for jerky freaks? Doug said that Jerky.com offers the value and selection no one else in the world can! We are dedicated to bringing you the widest variety of high quality jerky products which will fit every budget so you don’t have to search high and low for the meat snacks you love.

In addition to high quality products, jerky consumers want a selection of jerky that offers them more than just beef. Jerky.com has put together many varieties of jerky, including turkey, deer, elk, buffalo, ostrich, alligator, pineapple, and now even bacon! Nowhere else in the world will you find a selection of high quality meat snacks like this…period! This value, combined with our free shipping and friendly customer service, makes Jerky.com the only place to buy jerky.