With National Hot Dog day upon us, July 4th being the peak of beach, barbecue, and camp-out hot dog season, it’s important to get Hot Dog Eating right, so says the National Hot Dog & Sausage Council.

Never put condiments between the dog and the bun, condiments are always always to go directly on top of the dog.

Followed by dry additions such as your onions, dry cheese, garlics, then celery-salt and pepper go last. 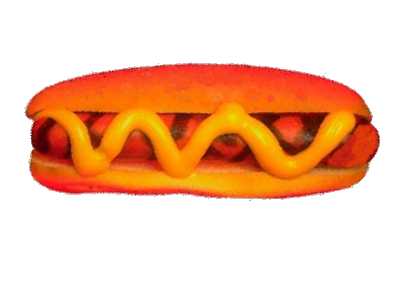 Hot Dogs must be served on Hot Dog buns or in during dire times bread slices. Seasoned Hot Dog buns, buns with onion bits or seeds are acceptable. It is considered poor policy to ever place a Hot Dog on a French Roll, Russian Kaiser bun, French croissant, or bagel.

You are never to use a cloth napkin when eating a hot dog, paper napkins are a must.

Dogs should never be served nor come in contact with china, ceramic, or glass plates. Hot Dog etiquette demands that, if a plate comes onto the scene it should be a Paper Plate.

5 bites are most common number for the normal person to finish a hot or sausage dog. Six bites for small people and large children.

Fresh herbs over use the presentation

Condiments and/or crumbs remaining on the fingers should be licked off, not washed away.

Multicolored toothpicks should be used to serve cocktail wieners, forks are in poor taste.

Do not send a Thank You note after attending a barbecue of Hot Dogs, it’s pretentious.

If you are the host, do not serve wine. Beer, lemonades (variety of flavors okay), and iced tea are the correct Hot Dog drinks required for a barbecue with Hot Dogs.

Estimated number of hot dogs consumed this year at Major League stadiums, according to a poll of concessionaires by the National Hot Dog & Sausage Council will be 26,000,000.

For Americans, St. Louis drew people from all over for the 1904 Louisiana Purchase Exhibition – also known as the World’s Fair. It’s reported that sausage concessionaire Anton Feuchtwanger ran short of gloves he relied on when he handed hot dogs to customers. He approached his baker brother-in-law challenging him to help and the bun was born.

There is no question that hot dogs go back further than a century. In 850 B.C. a precursor is mentioned in Homer’s Odyssey.

The frankfurter is believed to have been developed in Frankfurt, Germany, five years before Columbus set sail for the New World. By 1867, German immigrant butcher Charles Feltman was reported to have opened up the first Coney Island hot dog stand in Brooklyn.