Often times people who dine out have had friends recommend where to dine, or they research through sites such as Trip Adviser to see what people have to say about their dining experience. In my situation I visit the restaurant first, before I review their cuisine.

Cafe Del Rey, which is located on Admiralty Way in Marina del Rey has a touch of the coastal towns of the Mediterranean. The simplicity of their food preparation by Executive Chef Daniel Roberts is quite impressive, not to mention the view of the bay. With that said, my guest’s for our dining adventure included Tom Hallick, who is appearing with Sean Penn in The Gangster Squad to be released in January of 2013.Yin Jiang, a concert violinist, who tours with Andre Buchelli, who stopped by for a short time on her way to rehearsal and Rossana Huang, a international journalist who is a good friend of mine. All were ready for a wonderful celebration of dining.

The first order was Kobocha Squash Bisque, consisting of spiced pumpkin seeds, diced apple and some of their imported spices. This soup was so delicious that everyone had to order their own. Ah, but as an appetizer, the truffle cream mozzarella and reggiano pizza was to die for. What would dinner be like without a glass of wine or beer? Tom Hallick enjoyed a German beer and I sipped on a glass of Pinot noir Grigio 2004 Santa Margherita from Voltage, Italy. While Tom had a big appetite he also ordered Frito Misty-Calamari, shrimp, fennel, with lemon whole grain mustard.

Our main entrees where explained by Chef Roberts, who has worked throughout the United States in some of the top restaurants of the world. The first entree consisted of Blue Nose Sea Bass with brussel sprouts, green apple, cippolini onion, pane eta, and crisp potato with white wine. “I love it” stated Tom Hallick.

Rossana Huang ordered a vegetarian dish consisting of mixed vegetables with regatta. What a colorful dish and very delicious. I had to see what a vegetarian dish tasted like. My entree consisted of Maine Deanne Scallops with cauliflower puree, roasted corn, cherry relish, and basil bacon vinaigrette. I found this dish thoroughly enjoyable. At this point of our dining experience, we have a little more room to fill our tummies just a bit more.

Charlie Yover, the pastry chef for Cafe del Rey had yet another surprise for us. Since he prepares all his pastries on the premises, we indulged in a spiced plum tart with Bavarian cream, vanilla brown sugar carousel in plum paper. This is a light tasting desert, served with duo profiterole; a chocolate dipped honey yogurt ice cream with hazelnut mousse. Other deserts included chocolate crepes with dark chocolate mousse, grand mariner, tossed cherries with chocolate shavings and espresso. With this quality cuisine we were completely satisfied over and above what we had expected.

Hours of operation are from 12pm-2:30pm Monday-Friday for lunch and 5:30pm-10:30pm for dinner. Friday- Saturday. On Sunday dinner is served from 5pm-9:30pm and happy hours are from 4pm-7pm. For reservation for anniversaries, or company gatherings, there’s a cocktail bar with a lounge area, as well as a private dining area, which overlooks the bay. 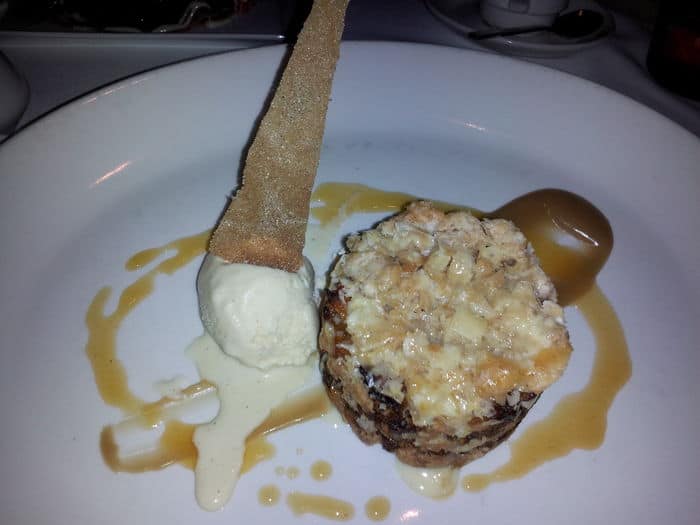