Nonna’s secret for the best pumpkin pie was that she always used fresh pumpkin, rather than canned. She would roast a medium-sized pie pumpkin.

These are the small pumpkins, which are edible, unlike the large carving pumpkins. CLICK HERE to read my article about how to grow your own big, beautiful pumpkins like my family does.

The great thing about pumpkin pie is that there aren’t many ingredients. They jst need to be fresh.

One frozen, 9-inch single pie crust, or the recipe for a homemade equivalent

One (12 fluid ounce) can evaporated milk

Cut pumpkin in 4 halves and remove seeds. Place cut side down on a cookie sheet lined with lightly oiled aluminum foil. Bake at 325 degrees for 40 to 45 minutes, or until the flesh is tender when poked with a fork. Cool until just warm. Scrape the pumpkin flesh from the peel. Either mash, or puree in small batches in a blender. Increase oven temperature to 450-degrees.

In a large bowl, slightly beat eggs. Add brown sugar, flour, and salt, 2-cups of the pumpkin puree, pumpkin pie spice, and evaporated milk. Stir well after each addition. Pour mixture into the unbaked pastry shell. Place a strip of aluminum foil around the edge of the crust to prevent over browning.

Bake 15 minutes at 450-degrees, then reduce the oven temperature to 350-degrees. Bake an additional 40 to 50 minutes, or until a toothpick inserted near the center comes out clean. Remove the strip of foil about 20 minutes before the pie is done so that the edge of the crust will be a light golden brown. 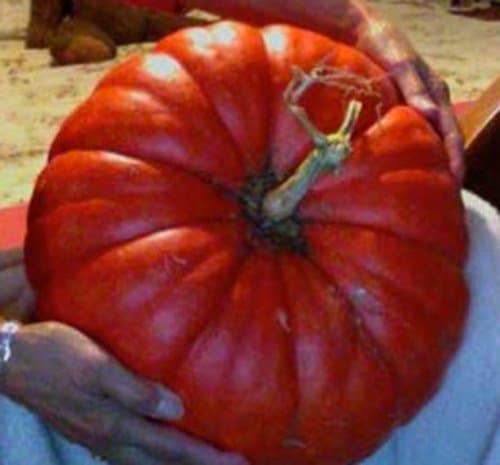 Pumpkins are not “just pumpkins.” There are different types, and they have different uses. Whether you are making lanterns or pies, you have to start with the right type of pumpkin.

( grew this in my yard,part of the gourd family,pretty, but it’s just for looks not to make pumpkin pies!

It was late October in 1947, all along my avenue, neighbors were busy raking up yard leaves to be piled and burned. Back then, homeowners were allowed to burn yard leaves in smoky piles creating a tantalizing smokey air that filled our nostrils with an unforgettable aroma, an aroma that signaled the arrival of fall.

Nonno was sitting in the back yard under his favorite fig tree, cracking and shelling walnuts. Nonna was there too, searching her vegetable patch for some late-blooming squash. The crisp, late October weather was invigorating, and it filled me with anticipation for Halloween and the coming holidays ahead.

The house smelled sweet, as it always did this time of year. All the ingredients for homemade pumpkin pies where on mom’s kitchen table: bottles of vanilla and bowls of sugar, spices and flour and five or six of Nonno’s garden pumpkins. Looking out the back window, I saw Nonna heading toward the house, cradling an armload of zucchini in the fold of her apron. Meanwhile, Nonno announced he’d finally finished shelling a huge bowl of walnuts and almonds for homemade Halloween candy.

Favorite Time of the Year

This was my favorite time of the year.

Halloween marked the beginning of all the warm and wonderful winter celebrations that were to come. Like all our family holidays together, Halloween was a time of sharing and enjoying. It was a time of kitchens warmed with spices and family smiles. The night before Halloween, our house came alive with the mouth-watering flavors of hot caramel and melting sugar as Nonna and Nonno boiled up batches of sugar coating for the glazed nuts. But of all the memories that Halloween brings it was the homegrown pumpkins that set the theme for this very special time of the year.

Papa had an old saying about growing pumpkins. He would say to me “If you want to be a successful gardener, grow pumpkins.” He was right of course, there is very little needed to make a pumpkin seed sprout. These tenacious seeds practically plant themselves and require a minimum of tending.

My grandparents were excellent growers of fruits and vegetables. They had learned their skills early on, back in the old country. They also learned that pumpkins are part of the fruit family. Like gourds and other varieties of squash are all members of the Cucurbitacae family, which also includes cucumbers, gherkins, and melons.

My grandparents grew a variety of pumpkins in their garden. For carving they grew the Connecticut Field Pumpkin, which grew to a respectful 10 to 20 pounds and occasionally, produced some as huge as 50 lbs. For homemade pies they grew the Small Sugar Pumpkins (4-10 pounds) the lantern pumpkins are too stringy. Other types included: Baby Bear (1-3 pound pumpkins), Autumn Gold (10-15 pounds), Baby Boo (6 ounces) And Lumina (10-20 pounds), Big Max, Cinderella, Atlantic Giant. Pumpkin varieties come in a wide range of sizes, the range from a few ounces to over 500 pounds. Their colors range from white to pink to red to traditional orange.

Preparing For Next Year

Each year, we preserved some of the seeds from our pumpkins for next season’s planting. We cleaned off all the soft pumpkin pulp from the seeds, selecting only the largest before spreading them onto newspapers to air dry. The fun was seeing what kind of pumpkin would grow from these seeds, sometimes a hybrid was produced, something that was neither a pumpkin nor a squash. They were one of a kind and we always looked for one of these to pop up in the pumpkin patch.

When the planting season came along, just after the spring rains had ended, our backyard looked like it was covered in three-foot wide anthills. These were the soil mounds, about four-feet apart, that Papa created where the pumpkin seeds were to be planted. Papa choose the sunniest section of the yard, one that received at least six hours of sun. He’d place between four and six seeds about eight inches apart, surrounding the mounds with water moats about five inches deep and wide. The moat held the water for the root system. Papap would cover the seeds about about an inch deep with enough earth to keep the birds from finding them.

Then we’d wait for what seemed like forever for the developing pumpkins, as they require at least 110 or more frost-free growing days. During that time the pumpkin needs to be well watered. During the seed stage, we watered them gently with a sprinkling can to avoid washing away the covering soil. Pumpkin vines are tenacious and will spread and grow in many different areas, so give these crawlers plenty of room. The flamboyant, emerald green leaves help to keep the pumpkin shaded from the hot sun and help it retain its necessary water and nutrients that are fed to it through its main vine the umbilical vine. The tendrils guide the vine’s direction as it grows.

When the young seedlings began to take hold, Papa made sure to thin the small ones from the mound and keep the large ones. Pumpkins are ready to harvest once the color of the fruit has deepened into a true orange color, somewhere between deep yellow and golden red, depending on the variety. When we selected our pumpkins from the patch for Halloween carving, Papa instructed us to leave several inches of stem on the pumpkin, it helped them stay fresh as they cured in the sun for ten days before storing them in a cool dry place.

Today, as I work in my little kitchen putting the finishing touches on my old-fashioned pumpkin pie and prepare for Halloween visitors at my door, I remember my special parents and grandparents, our simple home on Terra Bella Avenue and the good and uncomplicated -yet beautiful – lifestyle we once shared together and I’m reminded that the best things, like holidays, food, and even lives, aren’t necessarily the most elaborate ones.