NewsBlaze News
Home Entertainment Food Can You Mind Your Hot Dog Manners In Spite of the… Hot...

2007 was the year of Hot Dog Etiquette. How well we handle those bun wrapped puppies come July 4 of 2008, who knows?

None of our sources agree when asked who started the Hot Dog Wars now becoming to be known as the Weiner War. The only thing they do agree on is Hot Dog Etiquette rules still apply, so they’ll be once more made available to you right after your War News.

This year since January 1, Americans have consumed 956,000,000 hot dogs not counting our munch of choice at sports events, trade shows, conventions, country fairs. The battle for the bun was predictable when hot dog makers discovered we are eating a lot of dogs in 2008 but our numbers are the same as 2007, we are not eating more of them. 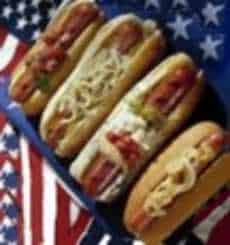 To get ahead of completers this Independence Day, Kraft introduces the snack-size hot dog, completely reformulating it’s Weiner recipe. They also changed their spice blend so they could lay claim to today making the juiciest hot dog they’ve ever offered up.

Not to be outdone, arch rival Ball Park came up with the Angus Beef Hot Dogs, touting they now bring you the First National Hot Dog to contain real Angus Beef. It sounds like somebody may be making Hot Dogs with faux Angus Beef but we can’t find them to ask.

So no matter the lack of civility between leading Hot Dog makers, it is every bit as important to Eat Your Hot Dog Correctly, Please.