Chef Lynn has now arrived at The Hilton Garden as her final destination. 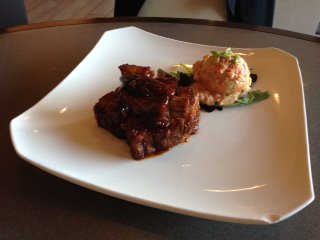 The exciting part of this story, is the creativity of Chef Lynn and how she is the second women to enter the Master Chefs’ Exam, which is just as hard as studying for a Doctorate. In fact, there are only 57 master chefs in the United States.

Chef Lynn has appeared on the Food Network on Ready, Set Cook and The Best Of… “Gourmet Divas,” including the James Beard House veteran, Rising Star of American Cuisine and “Wine Makers Dinner,” along with being voted in “Memphis’ Top Three Chefs in the 1999 Readers Poll.” She’s also been featured in numerous publications, including “Art Culture” and “The Soul of a Chef,” and is a Gold, Silver and Bronze Medalist in American Culinary Federation competitions. 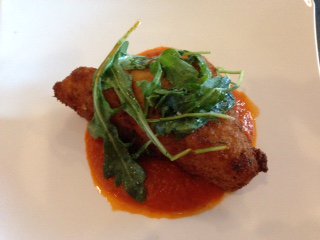 Thirty years of preparing unique, succulent dishes is a milestone for a woman of this caliber.

Enough already. There’s just too much to mention in this article, so let’s take a culinary journey with Executive Chef, Lynn Tilyou.

My guest for this tasting menu included Tom Hallick, who recently returned to “The Young and Restless,” and Yin Jiang, his wife, who is a concert violinist with New West Symphony and tours with Andrea Bocelli. 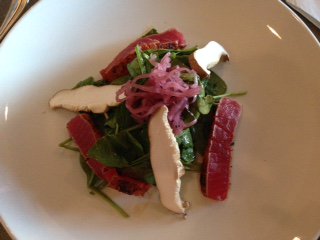 Oscar and Boris, our charming waiters set the stage for us.

Let the journey begin with a five star taste of Root beer B.B.Q.

Ribs, complimented with sweet potato salad. Wow, what a knock down taste. “Oh my God,” both Tom and Yin said. “This is the best we’ve ever tasted and it’s better than B.B. King’s in Memphis.” What’s the secret? It’s made with a Root beer reduction with jalapeno and Cheyenne integrated with yams, red onions, dijon mustard, mayonnaise, scallions and another ingredient we are not told. But that’s not all. “Grown Up Mac And Cheese,” served with 5 cheeses, aged Swiss, cheddar, brie, Gouda and Swiss in a tomato sauce with bacon and scallions is a favorite. 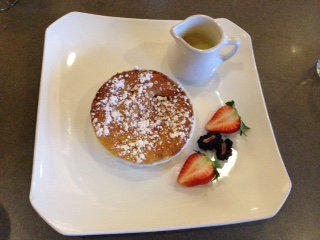 “Every dish is terrific,” says Tom Hallick. Other dishes that aroused our taste buds included “Roasted Beets,” served in a lemon poppy seed dressing, blue cheese and orange segments and a Spicy tuna salad, complimented with Spinach and Shiitake mushrooms in a soybean and wasabi dressing.

The “Coriander Seared Salmon,” served with warm corn salsa, in a spicy black bean puree, and pickled onions was my second favorite dish. 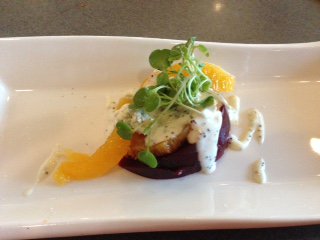 Towards the end of our journey, Johnny Diaz, the Food and Beverage Manager and Wendy Rosales the General Manager greeted us with a glass of Cuban Cognac. 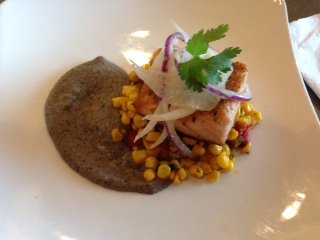