“Bacon is Meat Candy” Bacon of the Month Club from Bacofreak: Review 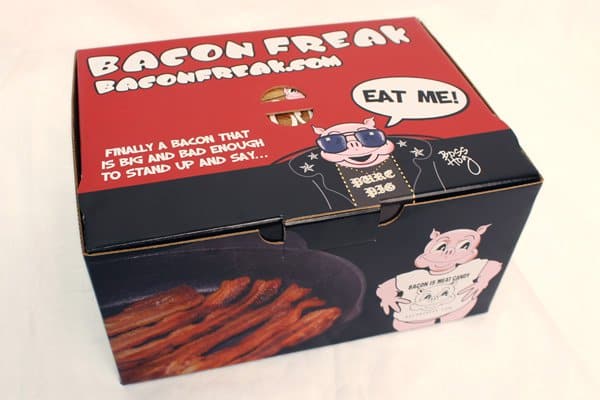 When it comes to bacon, there’s only one rule:

No one should ever be stripped of their right to eat bacon strips.

Sadly, I’ve seen it happen. In these moments of crisis, it doesn’t matter why the grocery store “ran out” or “forgot to re-stock” their meat department. You’re not looking for an explanation. You are looking for bacon.

Hungry, desperate, and hankering for bacon, you crawl toward your laptop and open a browser window. With your pork-reserves running low, you’re growing weaker by the minute. Somehow, you manage to type “bacon” in the search bar and click to Baconfreak.com. You frantically place an order for the first flavor you can find. It’s a close call, but once the bacon arrives, you pull through. 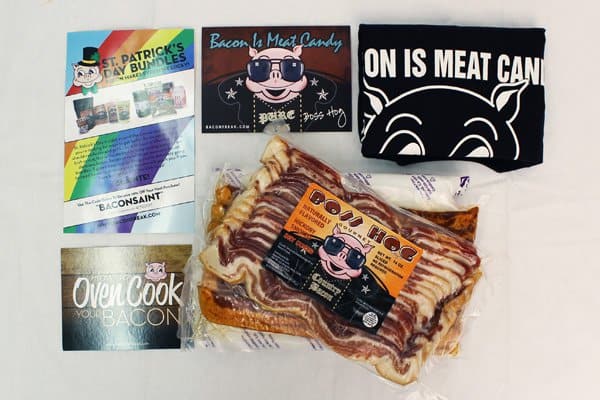 Bacon lovers, I issue this scenario as a warning. It’s time to take preventative action.

The possibility of a bacon shortage happening to you is all too real. Thankfully, there’s an easy solution. Simply sign up for one of Bacon Freak’s Bacon of the Month Clubs and you’ll have 2 pounds of bacon delivered to your door in new flavors each month. There’s no reason to suffer symptoms of a bacon-withdrawal ever again.

I sampled the “Bacon is Meat Candy” Bacon of the Month Club just this month and already feel fuller and more confident than ever. Bacon has finally given my the strength to say I’ve got breakfast, lunch, and dinner covered with bundles of bacon left to go. When you sign up, just pick 3, 6, or 12 months of bacon. My advice: reduce the risk of ever running low. Go with the full year.

Don’t these bacon flavors just sound important? They should, because they taste even better. Flavor-wise, they’re the king and queen of our United States of Bacon. They’re the smokey captain and his sweet first-mate on the S.S.Baconfreak. They’re the gods of bacon-flavor looking down on us from Bacon Heaven.

Too far? The point is, this is really top-notch bacon. The Boss Hog’s Hickory Smoked variety slays that “wood-smoked” claim most store bought varieties boast on their label. You can physically taste the time it took this bacon to develop its savory, smokey flavor. You can’t paint on that kind of flavor and you definitely can’t create it with chemicals.

On the other hand, the Honey BBQ Bacon sounds pretty easy to recreate. One pack of original bacon plus a jar of Honey BBQ rub and you’re in the bacon-coatin’ business. Yet when I opened the Boss Hogs’ package, it revealed a bacon so obviously tended with bacon-handling expertise. There was not a single spec of bacon left exposed by this sweet and savory coating.

How was it after being cooked? Lets just say this bacon taught me something I’d always believed to be true about bacon. Pigs are meant to be coated in honey.

If this were a Bacon of the Day club, I think I could keep up with even more fast-pace bacon deliveries. Then again, I’d like to keep at least a couple arteries un-clogged. 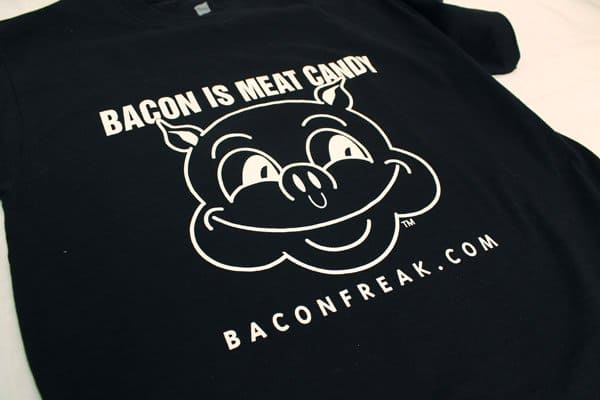 Thankfully, the charming (and hilarious) fliers included in the Baconfreak gift box say bacon is actually a healthy protein…when you cook it the right way. The “Oven Cook Your Bacon” flier includes step by step cooking directions to show and tell you exactly how it’s done. If you’re feeling stubborn and still choose to fry your bacon, the Bacon is Meat Candy Club comes with a graphic Baconfreak t-shirt to protect you from any splatter.

If you still don’t feel persuaded to order a Baconfreak Bacon Club, I’m not exactly sure why you keep reading this review. Clearly, you hate bacon and there’s nothing I can say or do about it. 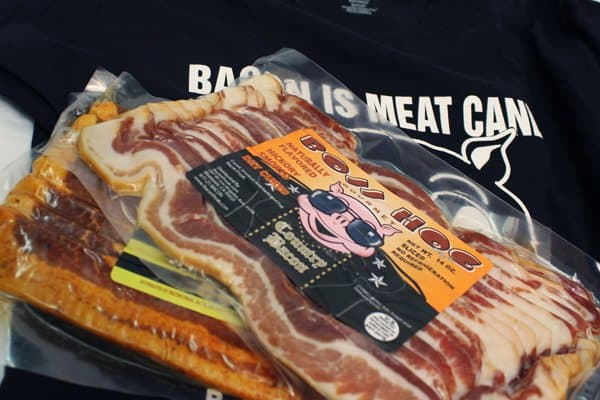 However if you love bacon (a.k.a. are human), you can find all the Bacon of the Month Clubs you’ll ever need at Baconfreak.