Recently, seriously dedicated “Bacon Freak” bacon of the month clubemember began the progressive journey of having our world famous & popular, always smiling Pig Mascot tattooed onto his arm. The tattoo is completely colored in now and we thought you’d all get a big kick out of seeing the finished product, which looks absolutely EXCELLENT, if I do say so myself!

The tattoo was intended to be a mixed metaphor, by artistically combining the whimsical wily wonder of our official Bacon Freak Mascot, with the traditional maritime marauding, “Pirates Pallet” or “Coat Of Arms,” know to most simply as the famous & infamous, “Skull & Cross Bones!” 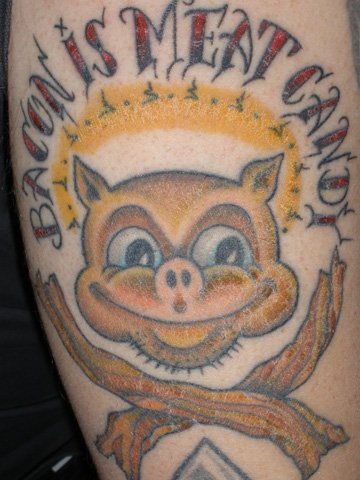 For Andy Hadley, simply walking around every day, proudly displaying his stylish and official, Bacon Freak “Bacon Is Meat Candy” designer T-shirts was not enough to express his deeply devout dedication for our fabulously flavored flesh.

You see Andy’s girlfriend is so totally awesome, she had bought Andy a bunch of Bacon Freak Bacon, Bacon Jerky and of course, his very own, official Bacon is Meat Candy T-Shirt! As in the case of “Love At First Bite,” Andy quickly decided that he loved our meat so much, that he was now going to make it a part of his own.

So he instantly contacted Thaddeus Gardner, Andy’s personal “Tattoo Artist Guru,” who designed the tattoo to include the happily smiling face of our Bacon Freak Mascot with a pair of bacon slabs crossing one another below the face, to create a very distinguished and distinctive “Bacon Is Meat Candy” Pig and Cross Bones” design.

Ok, so check it out Bacon Freaks! It’s definitely a work of beauty artistic inspiration.

If you have photos of you or someone else doing something fun, sexy, silly or artistic with Bacon Freak, don’t hesitate to contact us with the full story and plenty of photos and we assure you that you’ll be well rewarded for your efforts and glad you did!