Well the election was officially held and the people have clearly spoken! In the lovely Colorado community of Loveland, Co, Bacon Blew Fries Right Out Of America’s Bread Basket by nearly a “two to one” vote count landslide victory.

Democrat incumbent Bob Bacon defeated Republican challenger Matt Fries on Tuesday by a decisively clear, 63 percent to 37 percent victory in the election to represent the district that encompasses most of Larimer County in northern Colorado.

“I am so pleased that the voters appreciate the work that I have done,” Bacon said. 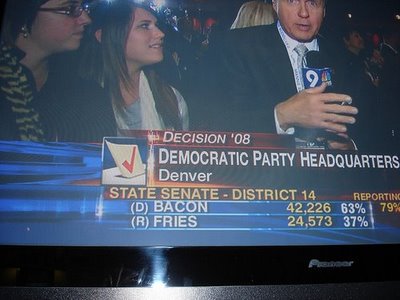 Bacon originally was elected to the seat in 2004 after serving three terms in the state House of Representatives.

Fries is a longtime education advocate.

Here are the official results: