The most beautiful actresses of our time not only bare their beauty on screen with their presence, but the living greats of our generation, which we here salute, also bare their soul. A great actor, like a great script, can make us laugh or cry. And these TOP 10 HOTTEST ACTRESSES OF OUR TIME made this elite list not only for their looks, but for their ability to move us in ways that only a great actor can; with their voice, their figure, their actions, and of course, with their face, and its every expression and nuance. While our industry is filled with plenty of amazingly talented and beautiful stars, these women are at the pinnacle, the forefront of greatness and all it embodies in Hollywood. They above all others are the reason why men and woman alike intrigue or obsess about Hollywood. They are Hollywood, in its greatest form. 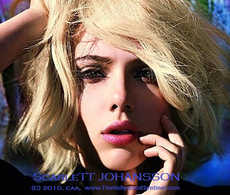 Beginning her screen acting career at only ten years old, starring in the film North in 1994, New York City born Scarlett Johansson got even more attention at fourteen, in the film The Horse Whisperer. At seventeen, she starred in the critically acclaimed Ghost World, but it was her role two years later as Charlotte in Sofia Coppola’s indie cult classic Lost in Translation that made her a certified star, proving her ability not only as a strong young actress, but as a beautiful starlet, and fast rising muse. That film, and The Girl With The Pearl Earring during 2003 brought her two Golden Globe noms, and later, a third nomination for a Woody Allen film, Match Point in 2005.

And stuck with it we are too, which is a good thing, considering we vote her one of “The World’s Top 10 Hottest Actresses.” An amazing face, figure, and talent (she even sings too), Scarlett Johansson is an actress that is creating a legacy again and again. With six films already slated for release in the next four years, she also just produced a film documentary.

Scarlett states, “One of the best things for a woman to hear is that she is sexy.” OK Scarlett, you twisted my arm. Maybe people think you look sexy because you ‘are’ sexy. Enough said!

Don’t miss our next issue as we reveal the next name of The World’s Top 10 Hottest Actress, and, be sure to check out the first two stars (in no particular order) in our archives section of The Hollywood Sentinel here below.