Former Starpower Management client Willis Burks II passed on this month. He was 75. Born October 25th, 1935 in Birmingham, Alabama, Willis Burks was a strong personality, with a warm smile and a booming voice.

Having lived in New York as well as Chicago, he met talent manager Bruce Edwin in 2007 at the Santa Monica Film Festival where they hit it off, with common roots in Chicago. Willis Burks later went on to appear opposite Michael Douglas in the feature film King of California, among more. His other notable roles included the Chronicles of Riddick, Trigger Happy, and Sunday, as well as a vast array of theatre.

Bruce Edwin of Starpower Management states, “Willis and our firm parted ways later on, but on good terms. I remember one day he took me to this arts and film festival. I think I was the only white guy there (laughs), but I felt at home with Willis by my side. He told me some wild stories that day. He was a good natured brother. He loved the fast, big cities including Chicago and Los Angeles, and he had no patience for anything slow, including drivers. He was a fine actor, and he will be missed. My heart goes out to his loved ones.” 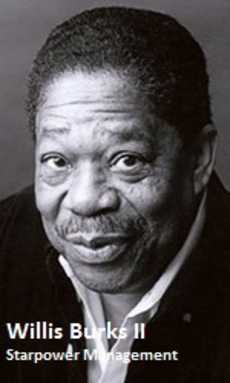 There will be a memorial services for Willis Burks II on December 11th, at 3 pm in Hollywood, California, for friends, fans, and loved ones. Contact Starpower Management at 310-226-7176 for location.