TO TOUSSAINT L’OUVERTURE by William Wordsworth

TOUSSAINT, the most unhappy of men!

Whether the whistling Rustic tend his plough

Within thy hearing, or thy head be now

O miserable Chieftain! Where and when

Wilt thou find patience? Yet die not; do thou

Wear rather in thy bonds a cheerful brow:

Live, and take comfort. Thou hast left behind

Powers that will work for thee; air, earth, and skies;

There’s not a breathing of the common wind

That will forget thee; thou hast great allies;

Thy friends are exultations, agonies,

And Love, and man’s unconquerable mind. 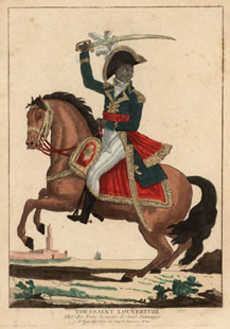 In 1801 Napoleon Bonaparte had ordered an invasion of this French colony by his brother-in-law Charles Leclerc to control it once again, and to covertly reinstate slavery. The slaves of Saint-Domingue had been freed on August 29, 1793 as a measure by the French Republic to ally themselves with the powerful Toussaint. The British had invaded Saint-Domingue and Louverture temporarily sided with the French to counter the English.

The coup of 18 Brumaire in 1799 begins the period known as the French Consulate. Napoleon Bonaparte plays a major role in this coup and assumes the role as First Consul. In this same year (1799) Napoleon issues the Proclamation on Saint-Domingue. “Remember, brave blacks, that the French people alone recognize your freedom and the equality of your rights.”

This was his way of saying that your rights are only a gift of the French government. Bonaparte wanted his lines inscribed in gold letters on all the flags of the battalions of the National Guard of the colony of Saint-Domingue. Toussaint’s rebuttal to the command was nicely put. (The Louverture Project)

“It is not a circumstantial freedom conceded to ourselves alone that we want. It is the absolute adoption of the principal that any man born red, black or white can not be the property of his like. We are free today because we are the stronger party. The consul maintains slavery in Martinique and Bourbon; we will thus be slaves when he will be the stronger.” (The Louverture Project)

The Treaty of Amiens on March 25, 1802 represented only a minor reprieve from the constant warfare between France and England. What is often titled the ‘Great French War’ lasted from 1793 to 1815. A main spoiler to The Treaty of Amiens, was the invasion of Saint-Domingue by the French. The motive of Napoleon to re-impose slavery on this Caribbean colony was a violation of Amiens.

The kidnapping of Louverture by Charles Leclerc and his subsequent return to France was appalling to many free-minded Europeans, like the romantic English poet, William Wordsworth. Wordsworth had experienced the French Revolution first hand, and turned negative once it morphed to the Reign of Terror. His poem, cited above, is charged with hidden meaning, that reflects his feelings about a range of issues, such as slavery or his feelings about the nature of freedom itself. 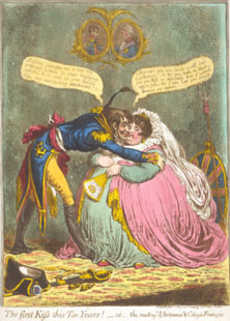 To better understand the poem, I read The Sublime Turn Away from Empire: Wordsworth’s Encounter with Colonial Slavery, 1802, by Mary Kelly Persyn. Wordsworth was greatly influenced by the Haitian Revolution and equally saddened by the turn of events that brought about Toussaint’s demise.

One must understand that this was 1802 and that Wordsworth’s thinking about slavery was still in an early stage of development. He needed to be careful also to not offend the English, who obviously were proponents of slavery in the West Indies. He asks Toussaint to remain happy, although he is in chains. “Wear rather in thy bonds a cheerful brow.” It’s as if the poet wants to keep him in his place.

But Wordsworth acknowledges that a great deal has already been accomplished. “Thou hast left behind Powers that will work for thee; air, earth and skies.” Here the forces of freedom, that we would normally associate with political change, appear as a phenomenon of nature. This is where the ‘romantic’ or an abstraction comes in as a surrogate of the abolition of slavery. And the Abolitionist Movement itself, as a stronger force, was still a few years down the path of time. 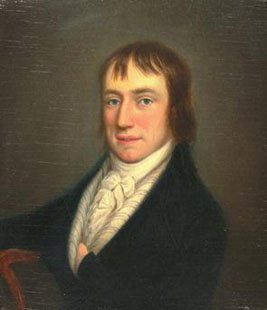 It sounds as if he is saying that Toussaint’s bold new ideas have their greatest kinship in merry olde England. This is how Mary Kelly Persyn argues the case in the previously referenced essay. “There’s not a breathing of the common wind that will forget thee; thou hast great allies.” That’s just a coded way of saying that all peoples are permanently impacted (positively) by your breaking of the chains of bondage.

Wordswords then uses the clever device of personification. That is, he describes Louverture’s friends as feelings or ideals of man that can not die. “Thy friends are exultations, agonies, and love, and man’s unconquerable mind.” Thus, even though he would die in prison, his work was not in vain. He had made the ideals of The French Revolution a reality!

While the horror of the earthquake in Haiti can not be denied, can not be nullified, one might find some solace in the words of William Wordsworth. Toussaint suffered mercilessly in that cold dungeon-like prison, the Fort de Jour. Napoleon re-imposed tyranny (temporarily) on Europe and the American colonies. But on January 1, 1804, a few years after the poem was written, Jean Jacques Dessalines declared Haiti a free republic. The freedoms gained in Haiti influenced the outcome of events for years to come; an example is The Louisiana Purchase. (Wiki-Haitian Revolution)

I believe that Haiti will re-emerge out of this disaster stronger than ever. Bill Clinton’s essay (What Haiti Needs), that appeared in Time yesterday, paints an optimistic picture of what Haiti can become. Bill’s (Clinton is the United Nations special envoy for Haiti) essay gives me faith that Haiti will be strong once again, just as it was when Toussaint Louverture freed his people from slavery some three hundred years ago. Wordsworth saw freedom as a part of nature. Freedom is a sublime ideal that can not be snuffed out by natural disaster.

What Haiti Needs by Bill Clinton