Victor Issa is one of the foremost figurative sculptors in America today, and is heralded for his remarkable ability to make bronze appear alive. His artistic hallmark “Creating Living Bronze” is the embodiment of his life-focused spirituality, respect for the human figure, love of life, passion for perfection, and undaunted perseverance. Victor has been sculpting for nearly three decades. His works have been featured in shows and exhibitions across America since 1985. Victor’s sculptures are displayed in private and public collections worldwide. Active in the fine arts community, Victor is co-founder and president of the Loveland Sculpture Invitational Show & Sale, the largest sculpture show in the United States. 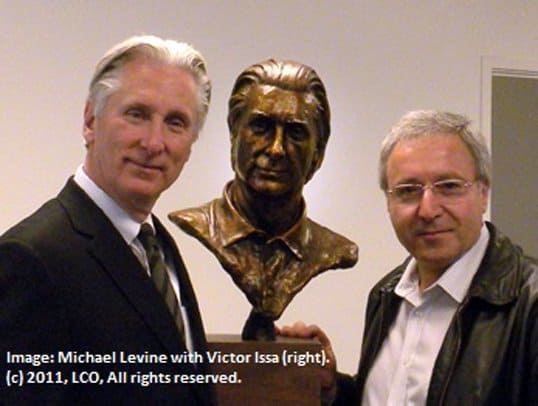 Michael Levine has been called “one of Hollywood’s brightest and most respected executives” by U.S.A Today. He has represented stars including Michael Jackson, Barbra Streisand, and hundreds more. Regarded by the national media as one of the country’s most prominent media experts, Michael Levine has appeared on most every major national television and radio show as a contributing media specialist. He has made frequent television appearances on The Today Show, Nightline, Good Morning America, CNN, Fox News, ABC News, MSNBC, and PBS among more.

His quotes frequent many major print media, ranging from Time Magazine to The Los Angeles Times, from Newsweek to The New York Times and People Magazine. He is the author of nineteen books, with his most recent entitled, Broken Windows, Broken Business. His previous book, Guerrilla P.R. is the most widely used introduction to P.R. in the world. Michael Levine is the creator of the LBN E-Lert Levine Breaking News. It is one of the world’s premier online newsletters, feeding the latest insider breaking news to over 474,000 people in all fifty United States in addition to twenty two other countries.

When Victor Issa and Michael Levine met, creative sparks did fly. The final result was Victor Issa’s creation of a museum quality life size bust of Michael Levine that will stand the test of time. To say that Mr. Levine was awe inspired is an understatement. Even a photographic glimpse of the work here above reveals to the viewer the mastery of its essence as an artwork of precision and soul.

Victor Issa’s approach to creating unique portraits in bronze represents the culmination of nearly thirty years of sculpting the human form. Be it a full figure, a simple bust, or a complicated group composition, his goal is always to capture and portray the essence and the soul of the subject, not just the likeness. His commission calendar is currently booked through mid 2012, but he is always excited to discuss future projects with discriminating patrons, those looking for the finest in bronze portraits. www.victorIssa.com