An Assassination attempt on the life of President Trump is now predicted by psychic to the stars Rose Stuart. This story and more follow in this new series of Breaking News Daily with Bruce Edwin, found exclusively at NewsBlaze, featuring select current daily world event summaries as well as reports on human rights and breaking news on all areas of the arts here in Hollywood.

The man who needs no introduction; Donald Trump has now officially taken office as President of the United States yesterday Friday. Obama’s website is now gone, replaced by Trump’s, including the POTUS twitter account.

Celebrity Psychic Rose Stuart, who as I reported earlier, has stunning, mind blowing accuracy in what she can tell about a person’s past without even knowing anything about them, and who predicted that Trump would win the election. She has made another stunning prediction that she says is yet to come. Rose predicts an assassination attempt on President Trump which she states will be similar to the Kennedy assassination. 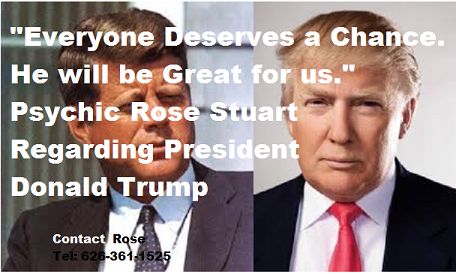 Rose states, “Trump is the man that is going to help bring change to this world and America.” She adds, “People are jealous that he did this on his own and used his own money, he did this not for publicity or financial gain. He is very smart, he is real, and very open minded,” She continues, “If Hillary Clinton were President we would have had many wars with different countries because they would not listen to a woman being President in some countries, which is a disgrace, where they will not talk to a woman or give her the same respect as a man.” She adds, “For this, there is much jealousy, but people need to give him a chance to make alliances with many countries.” She states that “He may have a little difficulty with China, but being a very smart and brilliant business man, he knows how to handle himself.”

Rose further states, “People are not expecting that he is being real, but he is.” She adds, “Trump does not want people talking for him, he wants to speak for himself. And when he does, he can change the world for the better.” Rose states that Trump has sincere good intentions for America, and his win is keeping us out of war with Russia, which she says we would have been involved in had Hillary Clinton won, because she was doing what certain men were telling her to do. Rose states that she believes that Trump’s win was a gift from God to keep us out of World War 3. 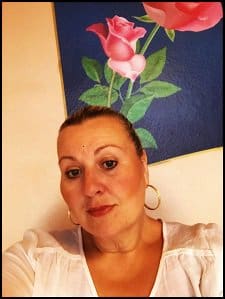 Regarding the assassination attempt on Trump’s life, Rose Stuart says, “There is going to be someone trying to assassinate him. It will not follow through, but within three years or less we will hear something of this. It is not ISIL. This is something similar to the Kennedy Assassination that America went through. But I see Trump surviving it. Trump is a very open minded and wonderful man.”

Psychic Rose is now accepting phone calls for readings for the new year by telephone at: 626-361-1525, or in person for reading in Los Angeles, California.

President Trump has been married to his wife, Melania, for twelve years and they are parents to their son, Barron. Additionally, Mr. Trump has four adult children, Don Jr., Ivanka, Eric and Tiffany, and eight grandchildren.

Mrs. Karen Pence, wife of Vice President Mike Pence, will be – according the the new White House website, focusing on the interesting area of ‘art therapy’ during her time in office.

Vice President Mike Pence once had his own radio show, and later become a congressman and then Governor of Indiana. He is reportedly passionate about his Christian faith.

The pretty model, and First Lady of the United States Melania Trump will be reportedly focusing on various humanitarian projects including fighting cyber bullying among children.

James “Mad Dog” Mattis has been approved as the new U.S. Defense Secretary. Trump also, during his speech, promised he would totally eradicate Radical Islamic terrorism from the face of the Earth.

Trump is reportedly going to stop funding groups outside of the U.S. that perform abortions, that have previously received U.S. aid under Obama. The March on Washington happened today (Saturday), and across the U.S., whereby countless women have marched in protest of Trump’s pro-life stance, and in defense of abortion rights.

This content is copyright, 2017, Bruce Edwin, all rights reserved. The office of Bruce Edwin and affiliates do not endorse any advertising or links that may appear on or in connection with this story.