A modest exhibition in Provincetown on Cape Cod this summer promises to open a window on one of the most intriguing facets of 20th Century art in America, the teacher Hans Hofmann’s profound influence on the status of women artists.

Hofmann, arriving from Germany where he had already established himself as an influential teacher, opened his art school in Manhattan in 1935. He taught in Provincetown during the summer. Between 1935 and 1958 when he closed the school to pursue his own career as an artist, Hofmann taught many of the artists whose work is to be found in the world’s museums. 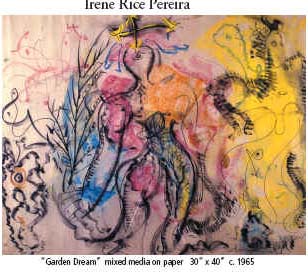 But a little noted aspect of his teaching career is the impact he had on the status of women as painters. He took them seriously at a time when most curators and collectors did not. Later, as Hofmann’s own reputation as a major artist grew, the women whom he taught benefited by their association with him.

The show in Provincetown offers three of Hofmann’s most interesting women students. Juanita Guccione and I. (Irene) Rice Pereira were sisters. The third artist in the show, Ada Rayner (1913-1983), was born in England and married the American Impressionist Henry Hensche, whose work in recent years has received increasing attention.

Pereira (1902-1971), the older of the Rice sisters, is known worldwide for her geometric abstract work, particularly her oil on glass paintings. But there was another side to Pereira’s work, her fluid, metaphysical gouaches, and it is this aspect of the work that is shown at Wohlfarth Galleries. 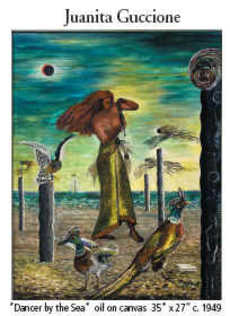 Guccione’s work is more diverse than her sister’s. Her life’s work (1904-1999) reflects almost all the major art movements of the century. She worked in the Realist, Cubist, Abstract and Surrealist veins. This fact, and her frequent name changes, conspired to deprive her of the wide recognition her work would otherwise have earned. But it was in the Figurative Surrealist and Abstract Surrealist traditions that she worked longest, in fact the last half of her life.

She has the distinction of being one of the very few, perhaps the only American woman artist whose work has been memorialized in a Muslim country. Sonatrach, the Algerian national energy combine, owns and exhibits 174 of her landscapes and portraits. She executed these paintings early in her career while living in Algeria.

The Pereiras at Provincetown are interesting because she made these large, elegant gouaches of cosmic figures-the metaphysician martyr Giordano Bruno might have called them star beasts-as an act of prayer preliminary to undertaking her day’s work at the easel, and they therefore provide an insight into her thought process, which was highly theoretical.

Guccione often sat next to Lee Krasner in Hofmann’s classes, and the two women were friends. Both sisters were German-speaking, and Hofmann often called on Guccione, who then painted as Juanita Rice Marbrook, to translate a difficult thought. Her gave her a number of scholarships to his classes.

The fact that Pereira and Guccione were sisters wasn’t known until after Guccione’s death. The women thought it undesirable to mention it. Both women followed their beloved younger sister, Dorothy, into art school. But Dorothy died in her early 30s, a loss that devastated both women.

While she did not study with Hofmann, Ada Rayner is closely associated with the Provincetown arts community. Her sensibility, particularly after she broke with the still life genre, is a fine match with Guccione and with Pereira’s works on paper. The large body of work she created known as The Imaginatives shares a dreamlike quality with Guccione’s Surrealist oeuvre, and she was, like the two sisters, a bold experimenter with media.

An opening reception Friday, August 15, from 7 to 9 p.m. will inaugurate Three Women Painters in Provincetown, which will run through August 28. A gallery talk is scheduled August 16 at 7:30 p.m. The gallery is located at 398 Commercial in the heart of Provincetown’s arts community. The phone number is (508) 487-6569. Owner Lavinia Wohlfarth also operates a gallery in Washington, D.C. She knew Guccione and has previously shown her work.