The film shown that night was a laugh riot called Wife Beware, a howler starring Adolf Menjou. The popularity of this new alfresco theater spread across the land. By 1941, supply and demand had encouraged the state of Illinois to construct the world’s largest drive-in theater, with a 1, 500-car capacity. Drive-ins were at a premium, with only 52 in actual operation across the country, and many more in the planning stages.

By 1950, the “Automobile Theater,” as it had come to be called, was as much a part of summer in America as ice cream, lemonade and baseball. By the mid-50s, the number of drive-ins across the country had climbed to 4,063. The late 1940s and early ’50s saw the popularity of the drive-in climb to new heights as it became a pop-cultural icon.

For the suburbanite, the joys of seeing a movie from the casual comfort of the family automobile was limitless. Now Mom and Dad could go out for the evening without the need of a baby sitter. They simply dressed little “Junior” in his pj’s and baby sister in her Dr. Denton’s and tucked them cozily into the back seat of the family car. Refreshments were packed, and the family was all set for a night at the drive-in. 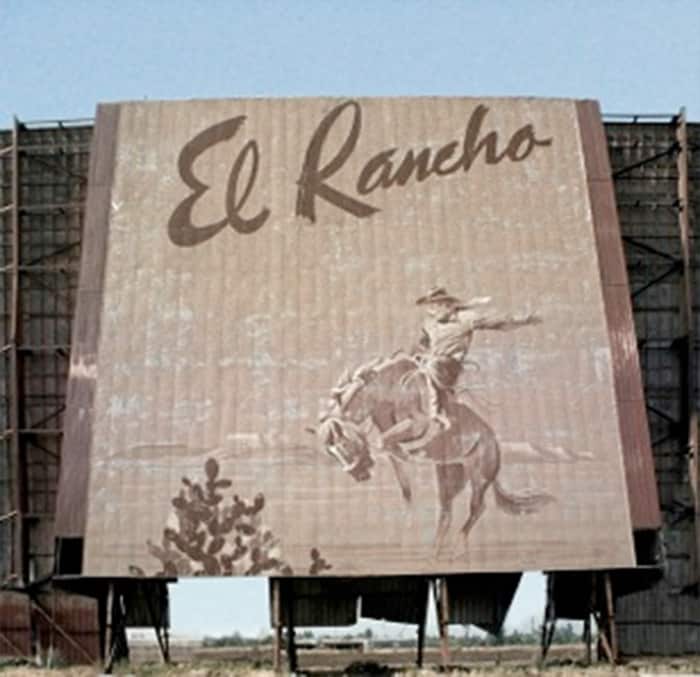 Those roomy, luxury cars of the ’40s and ’50s were a perfect match for the drive-in movie fad. Cars such as the Cadillac Coupe Deville, Oldsmobile 88, Lincoln Mark IV, Ford station wagon and the Chevrolet Impala came equipped with sofa-like seats, front and back arm rests, push-button radios, reading lamps, built-in ashtrays, cigarette lighters, and a huge curved front windshield that allowed passengers a panoramic view of the outdoor screen.

While waiting for the movie to begin, drive-in patrons flashed their car headlights, honked their horns and streaked their spotlights across the screen in a display of impatience and camaraderie; all part of the Friday night fun at the drive-in movies. The sounds of Buddy Holly, Frank Sinatra and Elvis Presley blared from car radios.

By the time the moon crested over the movie screen, the second feature was well under way. Although the drive-in theater was never really about cinema, its marquee reflected the taste of its teenage patrons and spawned the era of the low budget black and white B movies that included films such as I Was A Teenage Werewolf, The Body Snatchers, Godzilla and, my personal favorite, The Creature From The Black Lagoon. The acting in these films was rarely Oscar material and the photography was a bit out of focus, but there was always plenty of action.

It really didn’t matter what was playing, it was the going out to the theater that was important for teenagers. Chevys and Buicks full of teens poured through the gates of the drive-in every Friday night. It was exciting to see and be seen, whether on a date, or piled into the car with a group of friends. America’s teens rushed to the movie show almost every weekend.

During a movie marathon, die-hard faithful would spend as much as eight consecutive hours at their favorite drive-in.

National theaters like the Moonlite drive-in syndicate offered customers “Movies ’till Dawn.” If a customer could stay awake long enough they could see a collection of B-film classics such as The Thing, It Came from Outer Space, The Day the Earth Stood Still and Them.

Some familiar local drive-ins from the 1950s included: Moonlite, Tropicana, The Winchester, The Shamrock, Frontier, Capital and The El Rancho.

As bad as those old B movies were, they were loved by a generation of teenage moviegoers with wheels, pocket cash and a penchant for drive-ins. These same teens reveled in the birth of Rock & Roll and the car culture. In 1955, they ruled suburbia in their hot rods and low riders and cruised up and down main street every Saturday night before catching the final flick at their local drive-in.

Today, a mere 725 drive-ins survive in the United States, while others, with their blank screens and empty playgrounds are a nostalgic reminder of a bygone day. There are some who believe that America won’t let the drive-in fade away from the American scene. They believe that these establishments are too much a part of our past to ever let go.

To be sure, the drive-in movie is a beloved part of our cultural heritage, and I agree to lose it would be a great loss. But didn’t we also feel the same way about Movie Palaces, soda shops, Mom-and-Pop diners, drive-in restaurants and bowling alleys?